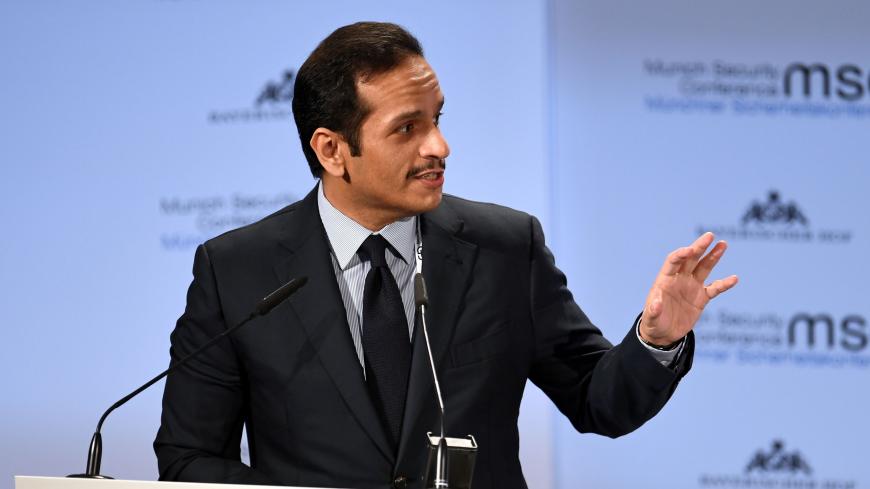 Qatar, disregarding the disapproval of the Palestinian Authority (PA), says it has no plans to stop supplying financial grants to the Gaza Strip.

“[Qatar] will continue to support the Gaza Strip,” Qatari Foreign Minister Sheikh Mohammed bin Abdulrahman Al Thani said Feb. 17 in his speech at the Munich Security Conference. Though Hamas controls Gaza, Thani said his country does not finance the group, which Israel and a number of other countries label as a terrorist organization, but rather are helping the territory's struggling population. “We are trying to put an end to the humanitarian crisis in Gaza in clear ways and in front of everyone's eyes,” he said.

Meanwhile, a member of the Palestinian Legislative Council is disputing the amount of aid that the Israeli newspaper Haaretz reports that Gaza has received from Qatar, saying the number is too high.

Haaretz columnist Yaniv Kubovich reported Feb. 10 that Qatar transferred more than $1.1 billion between 2012 and 2018 to the Gaza Strip, with Israel's approval. The newspaper said that about 44% of the transfers were invested in infrastructure, 40% in education and health care, and the rest was pledged to support Hamas and the United Nations Relief and Works Agency for Palestine Refugees (UNRWA). Haaretz cited "figures compiled by an international source and presented to the [Israeli] political-security cabinet last month."

The article also said that Israeli Attorney General Avichai Mandelblit held “a special review of the situation during which state legal and defense authorities were required to confirm that the transfers did not constitute a violation of Israeli and international sanctions on Hamas due to its status as a terror group.”

In October, Qatar announced it was making a $150 million grant to the Gaza Strip, payable in monthly installments of $15 million. Some $90 million has been allocated to pay the salaries of civil employees in the besieged enclave and $60 million is designated to buy fuel to ease the ongoing power crisis. Out of this grant, three payments have been transferred so far, in November, December and January.

Israel has worked to ensure that Qatari funds are not distributed to Hamas or non-eligible Palestinian employees and citizens. It agreed with Qatar that the funds should be disbursed through post office branches in the Gaza Strip. Each beneficiary must appear in person and provide an ID card and a fingerprint.

The PA is not a party to the agreement allowing the transfer of the Qatari grant signed in November by Hamas, Qatar, Egypt, the United Nations and Israel. The PA is angry that Qatar is sending the aid to the Hamas-controlled Gaza Strip through Israel, rather than through the PA in the West Bank.

Samir Abdullah, a former PA planning and labor minister who now does research at the Palestine Economic Policy Research Institute, told Al-Monitor that because Qatar's aid doesn't pass through the PA's official treasury, this undermines the PA's leverage over the Gaza Strip. “Qatar is fueling internal friction between Fatah and Hamas. Qatar is fueling the flames of Palestinian division because its agenda doesn't match the Palestinian [national] agenda," Abdullah said.

Adnan Abu Halil, a Qatari journalist writing for Al-Sharq newspaper, told Al-Monitor, “When Qatar offers its aid to Gaza, it isn't doing this as a charity organization that spends its money [altruistically], although this is part of its principles. Qatar seeks to strengthen its position in the region amid its disputes with major Arab and Gulf countries. Qatar sees its aid to Palestinians as a trump card. It is using this card without forcing Hamas to do anything. Besides, it is difficult to introduce funds into Gaza by force, without an understanding with Israel and the US.”

Atef Adwan, head of the Economy Committee of the Palestinian Legislative Council, told Al-Monitor Haaretz's $1.1 billion figure is inaccurate. (The status of the largely inactive council, in which Hamas holds a majority, is in question as it faces a dispute with PA President Mahmoud Abbas over legitimacy.)

Adwan said, "This massive amount is an exaggeration. Hamas has not received any Qatari funds [directly] because this would annoy the Israelis and the Americans, who are tightening the financial grip on Hamas. The Qatari amounts were allocated directly to Palestinians and this reflected positively on Hamas. The Qatari aid eases Hamas’ economic obligations toward the population of the Gaza Strip.”

The Qatari Committee for the Reconstruction of Gaza published Nov. 11 on its Facebook page a chart detailing the total Qatari funds that entered Gaza from 2012 to 2018. The yearly amounts shown add up to less than $700 million, rather than the $1.1 billion Haaretz reported.

“Qatar has played an important role in supporting the infrastructure of the Gaza Strip for many years," said Hamas spokesman Hazem Qassem. "It does not support Hamas, but it supports the Palestinian people in Gaza [run by Hamas] and the West Bank [run by Abbas' political party, Fatah]. The PA is attacking Qatar because [Qatar] is hindering its efforts to stifle Gaza."

He added, “Fatah’s attack on Qatar stems from internal Fatah disputes. President Mahmoud Abbas has strong ties with Qatar and has not publicly criticized it.”

It seems the Qatari grant gave a strong boost to Gaza. The website of the Qatari Committee for the Reconstruction of Gaza says these funds were allocated for humanitarian, health, infrastructure, sewage, water network and well projects and services for local government and municipalities. They also financed fuel for sewage and drinking water pumps and hospital generators. The funds were used to build an artificial limbs hospital and a residential city and to restore destroyed houses. Some of the money was allocated as compensation for the industrial and agricultural sectors after the 2014 war. The funds also helped finance operation of the Gaza power station, and settle salaries of Hamas civil employees in light of the movement's financial crunch.

Mohammed Abu Jiyab, editor-in-chief of Al-Eqtesadia newspaper in Gaza, told Al-Monitor that Qatari funds act "as a safety valve that defuses tension between Israel and Hamas." He added, "Qatar has invested its grants to improve its regional and international standing through Gaza. Israel is tracking and monitoring every penny that enters the Gaza Strip."

On the same day, Hassan Asfour, a former PA minister of nongovernmental organizations, accused Qatar during a show on Egypt's TeN TV of being part of a political "axis of evil" allied with Israel.

Qatar may be the only Arab country to provide financial aid to the Gaza Strip. This confers on it a certain influence and power that other countries lack in this important area of the Palestinian territories. The sharp criticism leveled against Doha doesn't seem to be preventing it from continuing its support to the Gaza Strip, which is appreciated by both Hamas and Israel.