White House senior adviser Jared Kushner recently talked about the administration's long-awaited Mideast peace plan, saying Gaza and the West Bank must be united under one leadership, which raised speculation and doubt in Palestinian circles. 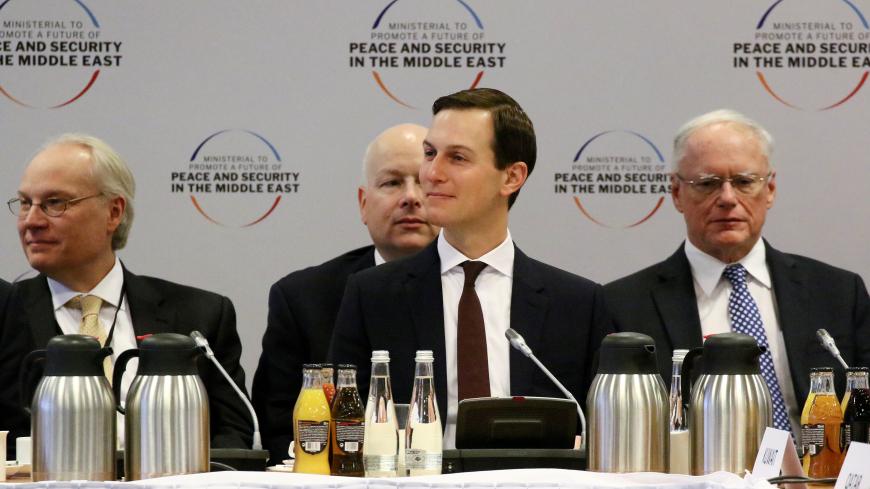 The US administration has been working on a Mideast peace plan since President Donald Trump made it to the White House in January 2017. Two years later, the proposal has yet to be unveiled, though talk is growing about its imminent release after Israel's April 9 elections.

Meanwhile, Jared Kushner, the president's son-in-law and senior adviser, talked about some aspects of the proposal in a Feb. 25 interview. He told Sky News Arabia the United States would like to see the West Bank and Gaza Strip "unified under one leadership and come together."

"There has been a lot of discussion between Hamas and through Fatah, but I think what the people want is a government that doesn’t have corruption," he added.

Bringing both sides "together under one governing structure" would greatly improve the Palestinian economy, which has been weakened by the absence of peace, he said.

Kushner's regional tour from Feb. 25 to March 1 included stops in Saudi Arabia, the United Arab Emirates, Oman, Qatar, Bahrain and Turkey in an effort to gather support for a peace plan that hasn't been revealed. The tour aimed to encourage the Gulf countries to mobilize funding for the success of the deal. But the visit to Turkey raised questions about the feasibility of convincing Turks of the deal, perhaps because of Ankara's very positive relations with the Palestinian Authority (PA) and, to an extent, Hamas.

Hamas spokesman Hazem Qassem told Al-Monitor that Kushner's words are misleading. “Kushner’s talk about unifying the Gaza Strip and the West Bank contradicts his country's opposition to ending the Palestinian division since [the split] … weakens the Palestinian position. No one will be able to change the situation in the Gaza Strip except by popular will through elections. This can't happen by removing one party and replacing it with another. Hamas will fight to prevent separating Gaza from the rest of the Palestinian homeland.”

It's unusual for a US official to openly speak of bringing together Fatah and Hamas under one government without specifying conditions. In the Sky News Arabia interview, Kushner merely said, "So what we will propose is hopefully something where both sides can gain a lot more than they give and where both sides will have to make compromises, but hopefully the benefits far outweigh the compromise."

The traditional US position has demanded that Hamas recognize agreements with Israel and renounce violence before it can be part of any Palestinian government. Most recently, such conditions were stated in the reconciliation agreement in October 2017.

Kushner’s statements about bringing Palestinians together under one leadership put many scenarios on the table. Fatah and Hamas could finally reconcile, or a large-scale Israeli military operation could be carried out to topple Hamas so the PA takes over the Gaza Strip. However, the second scenario seems unlikely since Israel has waged three wars against Gaza between 2008 and 2014, without ever eliminating Hamas. That brings up a third scenario.

“Kushner’s words can be interpreted as saying that Hamas is a candidate to be in charge of Gaza and the West Bank together, after being persuaded or pressured by Egypt, Qatar and Turkey to accept this role,” Abdullah Abdullah, a member of Fatah’s Revolutionary Council and head of the political committee in the Palestinian Legislative Council, told Al-Monitor.

“Meanwhile, the PA will not be the one playing this leadership role, since both the US and Israeli behaviors seem to [indicate they] want to eliminate it,” he added. For example, on Feb. 1, the decision to end all US aid to the Palestinian security forces entered into force. That day, the US Agency for International Development announced it was ending all its Palestinian projects, closing all its offices in the Palestinian territories, and canceling the contracts of hundreds of Palestinian employees.

Kushner’s statements were followed by Palestinian, Israeli and Arab reactions.

Palestinian President Mahmoud Abbas vowed, as he has many times, to thwart the peace deal.

Israeli Gen. Amos Yadlin, former head of military intelligence, told Maariv newspaper Feb. 25, “Kushner’s unprecedented talk about uniting Gaza and the West Bank under one leadership may not work. The Palestinians have been vainly trying to make reconciliation a success for 11 years. Washington is, however, trying to succeed where they failed.”

PLO Executive Committee Secretary Saeb Erekat visited Qatar March 2 and was briefed on the results of Kushner’s tour. Offering an Arab perspective, Qatari Emir Tamim bin Hamad Al Thani said during his meeting with Erekat that Qatar has made it clear to Kushner that a peaceful solution to the Palestinian-Israeli conflict requires ending the Israeli occupation and establishing an independent Palestinian state with East Jerusalem as its capital, based on June 1967 borders. Erekat praised Qatar’s positions and its ongoing support of the Palestinian people.

Kushner had arrived in Qatar March 1 and met with Foreign Minister Mohammed bin Abdulrahman Al Thani and discussed the peace process between Israel and Palestine.

Meanwhile, Abdul Khaleq Abdulla, former adviser to Emirati Crown Prince Mohammed bin Zayed — and a friend of Kushner’s — attacked the PA in a Feb. 28 tweet for rejecting the peace plan and warned that Israel would annex the West Bank if the PA persists in opposing the plan.

Hussam al-Dajani, a political science professor at Ummah University in Gaza, told Al-Monitor, “Kushner’s statements about uniting Gaza and the West Bank under one government mean that Washington agrees to a two-state solution and reconciliation between Fatah and Hamas, which reflects positively on finally making it a success. Hamas is required to benefit from this pro-reconciliation US approach.”

He added, “Hamas is targeted by most countries in the region, which are working to undermine it by keeping it besieged in Gaza. But the question is whether the international community is capable of undermining Hamas, which party could replace it and what mechanisms would be put in place to end Hamas’ rule.”

Al-Quds newspaper on Feb. 27 cited undisclosed sources as saying Kushner seeks to give Gaza self-autonomy. Under the plan, it said, Gaza would be linked politically to self-autonomous areas in the West Bank, namely Area A; land transport between them would be provided; a major port would be built in Gaza; and means of air transport to and from Gaza for individuals and goods would be established.

Al-Quds also cited analysts as saying Kushner’s plan includes the investment of $25 billion in the West Bank and Gaza over 10 years by Gulf states, and $40 billion in Egypt, Jordan and Lebanon, which host Palestinian refugees.

Mohammed Abu Jiyab, editor of Al-Eqtesadia in Gaza, told Al-Monitor, “Kushner’s statements indicate that the economic issues and the regional and Palestinian investment projects are the most important features of the [peace plan], through a system of regional economic ties to achieve the interests of the countries of the region, all the while integrating Israel.”

He noted, “Kushner seeks to see Gaza and the West Bank under one leadership, as long as this leadership doesn't oppose Washington." That's why, he believes, Kushner doesn't see Hamas or Abbas as the leader if the deal is implemented.

It would be logical for the financial grants to include the Palestinian territories, Jordan and Lebanon, both for the resettlement of refugees and to rehabilitate their deteriorating economies. However, Egypt’s presence among the countries covered by these grants raises speculation about Gaza perhaps expanding south into Sinai under development plans such as industrial zones and free zones leased for 99 years. This could mean that Egypt and other countries might play a role in persuading Hamas to take the deal. Even if Hamas doesn't accept it, the movement might be convinced to not oppose it — although Hamas has always voiced its rejection of Kushner's plan.