Why is Qatar helping Hamas in Gaza?

The Palestinian Authority believes the Qatari aid to the Gaza Strip serves the interests of the US and Israel, which plan to announce the "deal of the century" that aims at separating the Gaza Strip from the West Bank. 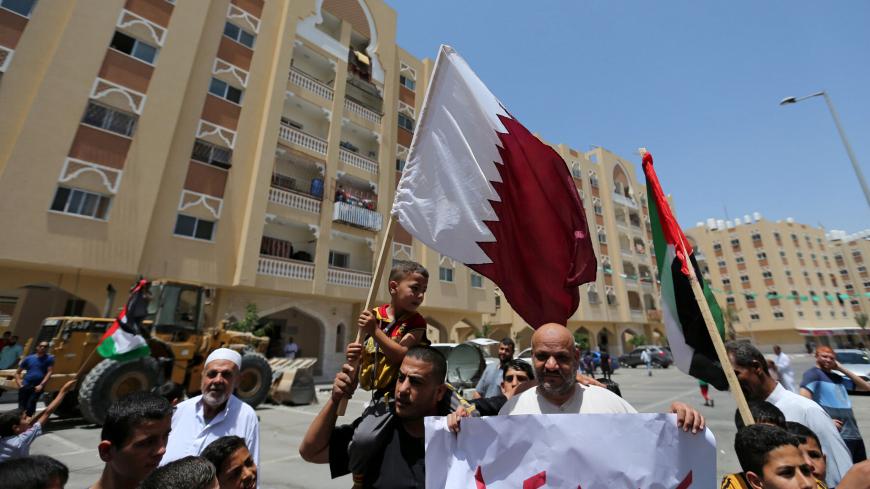 A Palestinian man and his son hold a Qatari flag during a rally in support of Qatar, inside Qatari-funded construction project Hamad City, in the southern Gaza Strip, June 9, 2017. - REUTERS/Ibraheem Abu Mustafa

Meanwhile, many Qatari associations launched a relief campaign called “Gaza Deserves a Better Life” on Oct. 7, under the auspices of the Regulatory Authority for Charitable Activities. The effort seeks to collect millions of dollars in humanitarian aid for the Gaza Strip. The Qatar Red Crescent, the Qatar Charity, Education Above All and Silatech participated in the campaign.

The two-week campaign seeks to address the following urgent needs in the Gaza Strip: health, education, water and economic empowerment. The campaign ended Oct. 21. Donations reached 5 million Qatari riyals (about $1.3 million) by Oct. 16. The donors are anonymous and can make deposits at Qatari banks.

Before this latest campaign, Qatar had offered $60 million to buy the necessary fuel to operate Gaza's only power station, in cooperation with Israel and the special coordinator for the Middle East peace process, Nickolay Mladenov. A total of 11 fuel trucks entered Gaza between Oct. 9 and 12. However, on Oct. 13, no more trucks were allowed to enter upon an order from Israeli Minister of Defense Avigdor Liberman, in response to the Palestinian protests on the Israeli border Oct. 12.

The Palestinian Authority (PA) complained to the UN secretary-general about Mladenov’s meddling in internal Palestinian affairs.

The PA also expressed anger regarding official Qatari aid, part of which reached the Gaza Strip directly and not through Palestinian governmental organizations. The PA warned that this support is an attempt to barter Palestinian political rights for humanitarian aid, ultimately separating the Gaza Strip from the West Bank.

Many Qatari development projects have been implemented in the Gaza Strip in coordination with the Palestinian government in Ramallah. Most recently, Qatari Ambassador to Palestine Mohammed al-Emadi inaugurated the Palace of Justice in Gaza Sept. 16 in the presence of Moufid al-Hasayneh, the minister of works and public housing in the consensus government. The ambassador also inaugurated a project to pave a main road in the Gaza Strip to connect its north and south.

Akram Nassar, director of the Qatar Red Crescent in the Gaza Strip, told Al-Monitor that the “Gaza Deserves a Better Life” campaign seeks to support 12 humanitarian projects in Gaza in the fields of health, water, environmental reform and social development. The total value of the projects is estimated at 53 million Qatari riyals ($15 million).

Nassar said the Qatari organizations were compelled to launch the campaign in Gaza due to the deterioration of its humanitarian situation, the decline of basic services, the exacerbating poverty and unemployment. He noted that funding would start as soon as the campaign ends and the sums of money for the project implementation become available.

According to Nassar, the Qatar Red Crescent has implemented 80 relief and development projects in the Gaza Strip since the beginning of its work there in 2008. The projects have cost a total of $110 million and benefited more than a million Gaza residents.

Qatar Charity, an organization participating in the campaign, announced Oct. 14 that its projects annually benefit 800,000 Palestinians or 40% of the population of the Gaza Strip.

By supporting Palestinians, Qatar wants to cement its political position in the Middle East. Qatar has good relations with Hamas, and in July 2018, Qatar indirectly brokered the truce between Hamas and Israel amid rising Palestinian protests on the eastern border of the Gaza Strip.

The Gaza Strip's tough economic and humanitarian situation stems from the 12-year Israeli blockade. The PA slashed government employees’ salaries in the Gaza Strip in March 2017, and the United States halted more than $500 million in humanitarian aid to the UN Relief and Works Agency for Palestine (UNRWA) and to development projects in Palestinian territories.

Ahmed Majdalani, a member of the PLO's Executive Committee, told Al-Monitor, “We will not stand idly while the parties implicated in this dirty game that overstepped the Palestinian government and leadership offer aid to the Gaza Strip. Mladenov is one of them, and we no longer accept any dealings with him. We have asked the UN secretary-general to stop Mladenov from continuing to overstep.”

Majdalani said help is being given to Hamas under the pretext of humanitarian aid while in reality it aims to cement Hamas’ rule in the Gaza Strip, give it legitimacy and prepare it to be a future partner in the US plan to separate the West Bank from the Gaza Strip.

Different social classes in the Gaza Strip — from the poor and unemployed, to those whose homes have been destroyed by Israel — benefit from Qatari projects implemented in coordination with the Palestinian government, especially in terms of reconstruction. Qatari Ambassador Emadi told Reuters Feb. 22 that the funds that Qatar transfers for Palestinian relief are given with Washington’s blessings. This coordination shows that Qatar does not support Hamas, but is helping Israel avoid a new war in Gaza, he added.

Majdalani said the PA informed Emadi, during his visit to Ramallah Sept. 13, that any aid or projects must first go through the Palestinian government, and there should be no overstepping.

Head of Hamas’ political bureau Ismail Haniyeh asserted Oct. 13 that they would not accept any solutions that do not completely lift the blockade off the Gaza Strip. Speaking at the funeral procession of seven Palestinians shot and killed by the Israeli army during protests along the border, he added, “We will not barter the Great March of Return protests for diesel and money although we appreciate the Arab and international efforts to help Gaza’s citizens.”

A report issued Sept. 24 by the World Bank showed that the Gaza Strip's economy is rapidly collapsing and that the aid offered to Palestinians lately is unable to stimulate economic growth. Unemployment in Gaza has reached 54% (70% of whom are youth).

Talal Okal, a political analyst and journalist at al-Ayam newspaper, told Al-Monitor that the United States and Israel are expediting the implementation of “the deal of the century” under the slogan of rehabilitating the Gaza Strip, and are sending humanitarian and economic aid through countries like Qatar.

He noted that the PA is well aware of the plans of the United States and Israel, unlike Hamas, which believes this aid is the result of the Great March of Return that began in March.

Journalist and political activist Houssam al-Dujani told Al-Monitor that the flow of aid to the Gaza Strip expresses a changing international and regional atmosphere with the escalation of the Great March of Return. Some parties have taken advantage of offering aid to play a political role in the Palestinian cause.