Qatar's efforts to supply the fuel-starved Gaza Strip with diesel oil have been stymied, at least temporarily. 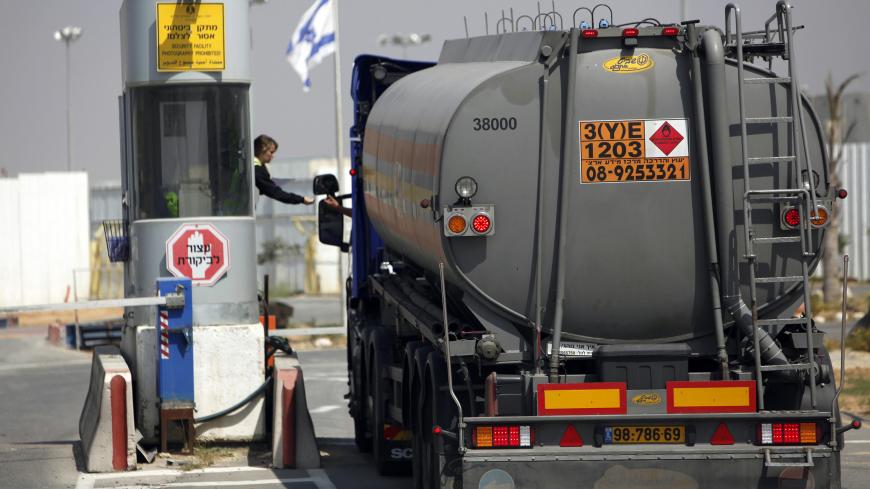 A tanker loaded with fuel for Gaza enters the Kerem Shalom crossing between Israel and the southern Gaza Strip, April 4, 2012. - REUTERS/Amir Cohen

Liberman tweeted Oct. 13, "As long as the events continue on the border and fire balloons continue to be launched toward Israel, no fuel shall be transferred to Gaza.” The protests continued, however, and on Oct. 16, an Israel Defense Forces plane fired on Palestinians allegedly launching the balloons. No casualties were reported.

Liberman's action was widely rejected by Israeli Security Cabinet members, who voiced concern that it would only aggravate the security situation on the border.

The tankers that were allowed to cross the border were carrying the first shipments of $60 million worth of oil Qatar purchased from Israel's Paz Oil Co. to help alleviate the desperate conditions in the Gaza Strip. The fuel would help provide residents with eight hours of electricity a day, instead of the current four, for six months.

The shipments were arranged under an agreement between Qatar and the United Nations. The deal bypassed Palestinian Authority (PA) President Mahmoud Abbas, who has been imposing severe sanctions on Gaza for years. Abbas' Fatah party controls the West Bank territory and would like to control the Gaza Strip as well; the rival Hamas movement currently administers the latter.

Even before Liberman suspended the shipments, the PA was already trying to prevent fuel from reaching the Gaza Strip, threatening to stop dealing with Paz Oil if it proceeded with the agreement. This prompted the Israeli government to call on small companies to transfer fuel to the Kerem Shalom crossing in the southern Gaza Strip.

In 2006, the PA signed a two-year agreement with Paz Oil to transfer fuel to the Palestinian territories at a cost to be deducted from the Palestinian taxes paid to Israel on a monthly basis. The agreement is renewed every two years.

An official at the Gaza power plant told Al-Monitor on condition of anonymity that, in addition to the fuel deal being made without the PA’s consent, the PA is mostly annoyed because its treasury won't receive taxes it would have otherwise collected. The PA imposes a tax of 56% on each liter of fuel purchased by Palestinian citizens. Over the first eight months of 2018, the PA collected fuel taxes of approximately 1.65 billion shekels ($458.3 million).

Stephane Dujarric, the spokesman for the UN secretary-general, said in a statement Oct. 9 that once the supply is resumed, the number of fuel tankers provided by Qatar would gradually grow to 15 a day. But Al-Monitor learned from a worker at the Kerem Shalom crossing that from Oct. 9-12, only 11 tankers total passed through the crossing.

The Gaza Strip has faced an electricity crisis since Israel bombed its only power plant in 2006. While Gaza needs 500-600 megawatts per day to provide 16 hours of electricity to residents, the Gaza Electricity Distribution Corp. is only providing 143 megawatts per day. Israel provides 120 megawatts of that amount at a cost covered by the PA, while 23 megawatts are provided by the one generator currently operating at the Gaza power plant. This generator is powered by Egyptian fuel under a 2007 agreement Cairo reached with Hamas. As a result, citizens get an average of only four hours of electricity per day.

The Gaza power plant official told Al-Monitor the amount of fuel transported so far isn't enough to run two generators. The source said the plant needs 300,000 liters per day to be able to run two of its four generators and is waiting for the remaining quantities that were announced.

Abdallah Abdallah, a member of Fatah’s Revolutionary Council and chair of the Political Committee of the Palestinian Legislative Council, told Al-Monitor that the United States pressured an Arab country (meaning Qatar) to provide fuel to the Gaza Strip to punish the PA for its political positions. During his Sept. 27 speech before the UN General Assembly, Abbas rejected the United States as a lone broker in negotiations between the Palestinians and the Israelis. PA officials say the United States is biased toward Israel and doesn't act as a neutral mediator in the peace negotiations.

According to Abdallah, Abbas told Qatari Ambassador Mohammed al-Emadi during a Sept. 13 meeting in Ramallah that he rejected any steps to deliver aid to the Gaza Strip without the PA’s consent.

Abdallah further said that the PA will block any plans it believes will interfere with the Palestinian cause and will be announcing decisive steps during the Palestinian Central Council meeting scheduled for Oct. 28.

Of note, Qatar's Foreign Ministry said Qatari Emir Sheikh Tamim bin Hamad Al Thani on Oct. 10 pledged a $150 million package of emergency aid to the people of the Gaza Strip through the Qatar Development Fund, the government body responsible for distributing the country's foreign aid. The statement didn't say whether that amount includes the $60 million of oil.

Hamas leader Hammad al-Raqab told Al-Monitor, “Supplying Gaza with fuel without the consent of the PA was a result of the PA’s positions and sanctions against the Gaza Strip and its threats to take further measures at the end of this month.”

He said Hamas can't remain silent about Abbas’ measures to stifle the Gaza Strip, and added that in October, a senior Hamas delegation is scheduled to travel to Turkey and Qatar, among other countries, to find solutions to the worsening humanitarian situation in the Gaza Strip.

Unemployment has reached 70% among young people in Gaza, and half of the total population there lives in poverty. Gazans hope that regional and international parties will provide further humanitarian assistance capable of alleviating their dire situation.