Poor management and dubious contracts by the Palestinian Authority and Hamas are making an electricity crisis in Gaza worse. 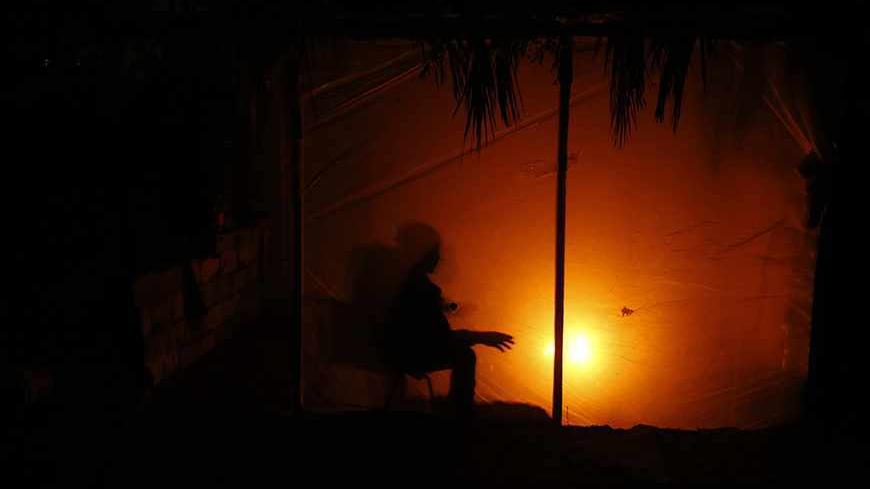 A Palestinian man warms himself by a fire inside his makeshift shelter during a power cut in the northern Gaza Strip, Nov. 11, 2013.

The electricity crisis in Gaza has proven to be as devastating as the Israeli occupation, as never-ending as negotiations and as neglected by Palestinian officials as the Palestinian reconciliation. There have been plenty of discussions in this regard, but the crisis persists.

But the crisis is not hopeless, with three main problems that can be addressed:

As the only plant in the Palestinian territories, it began its production in 2003 pursuant to a contract concluded with the Palestinian Authority (PA). The latter is responsible for importing the plant’s fuel needs in exchange for $30 million a year. This fuel would be burned to produce electricity regardless of the actual production. The amount was calculated according to the plant’s theoretical production capacity of 140 megawatts, albeit a capacity the plant has never reached or even been close to since its establishment. The average cost of fuel bought from Israel is 0.5 Israeli shekels ($0.14) per kilowatt, while the average cost of local fuel production is 1.5 shekels to 2 shekels ($0.43 to $0.57), according to the electricity quantity produced. The company realizes a continuous annual profit equal to 10% of the owners’ equity — or $8 million — according to its annual financial report of 2012, which was obtained by Al-Monitor.

The monopolization of the fuel sector by the General Petroleum Authority

Established in 1994, the authority was annexed until 2003 to the presidency and after that to the Ministry of Finance. It was granted exclusive supervision over the fuel sector in terms of imports and exports and went on to impose itself as a mandatory mediator between Palestinian companies and the Israeli market, which was completely open to them.

The establishment of the authority highlights the state’s capitalist nature, transforming the PA from a business facilitator to a competitor under unfair competition terms. This, in turn, has financially and administratively hindered Palestinian companies and the Palestinians.

The report issued by the Coalition for Accountability and Integrity (AMAN) in April 2009 titled “The General Petroleum Authority between assessment and correction” — and obtained by Al-Monitor — reads: “Since the establishment of the authority in 1994, and until its referral to the Ministry of Finance in June 2003, the committee has not abided by any specific law or rules in terms of the conduct of its affairs and work mechanisms and has not been affiliated with any ministry. As a result of its affiliation with the office of the president, the authority has fallen outside of general and legislative supervision, which has prompted many questions about its management.”

Fuel taxes not being returned to Palestinian companies

At the beginning of its rule, the PA signed an exclusive fuel procurement contract with the Israeli Dor-Alon company. It renewed its $3.6 billion contract in May 2012 with the Israeli Paz Oil company for two years, ending in October 2014. On behalf of Palestinian companies, the committee buys fuel from Israel for normal or industrial use. Israel imposes high taxes on the fuel sold to its citizens or to the PA such as a value added tax (VAT), amounting to 17%. Another — dubbed the “blue tax” — is the total taxes and fees collected on behalf of governmental institutions, namely transport, security, environment and settlement. Blue taxes amount to 110% of the initial price of fuel after refining, which is 2.2 shekels ($0.67) for every liter of fuel.

This comes in addition to the costs of transportation, management and security guards, which increase the price of an industrial liter of fuel sold to Gaza to 5.7 shekels ($1.60). The PA recovers, through the Ministry of Finance and pursuant to the Paris Protocol, all the taxes paid by Palestinians on merchandise bought from Israel as part of the monthly compensation process. The value of the net compensation Palestine receives from Israel is estimated at 500 million shekels to 600 million shekels ($100 million to $150 million) per month, covering around 40% of the total budget of the PA — according to the 2013 PA state budget, whose balance sheet was obtained by Al-Monitor. It is worth mentioning that, to encourage and motivate industry, Israeli law allows Israeli companies and industries to get back taxes, including blue taxes. The PA, however, does not give the blue taxes back to its citizens and companies. Therefore, taxes on fuel contribute to PA revenues, estimated at $400 million per year.

Proposed strategies for a solution

Some have noticed that addressing the power outages in the past was limited to dealing with daily and temporary solutions. Electricity has been a topic of competition between the PA in Ramallah and the Hamas government in Gaza, where each accuses the other of causing the outages.

The crisis must be faced strategically by considering the causes described here. Terminating the contract between the PA and the electricity company will save $2.5 million, which is the monthly amount the PA pays the company. This money can then be directed to buying fuel or electricity directly. That would reduce the electricity consumption bill.

Also, requesting that the electricity company pay back the money for electricity never produced, while emphasizing the need that the PA attorney general quickly conducts an official and popular investigation to identify the details of the signing of that contract, which some described as unfair. The attorney general may request the complete file on that issue from the Palestinian Legislative Council.

In the same context, power plant owners concede on that point for the benefit of the people of Gaza because the contract was unfair, especially since the power plant has recovered its costs.

On the other hand, in line with the free market principles pursued by the PA, they should liberalize fuel trade and making the General Petroleum Authority supervise quality, environmental specifications and prices.

It is also necessary that the Hamas government in Gaza abandon its management of electricity and energy in Gaza by privatizing it and thus taking the issue out of the political quarrel and polarization.