As Palestinians in the Gaza Strip continue to suffer from daily power cuts, Qatar proposed to Israelis supplying Gaza with natural gas. 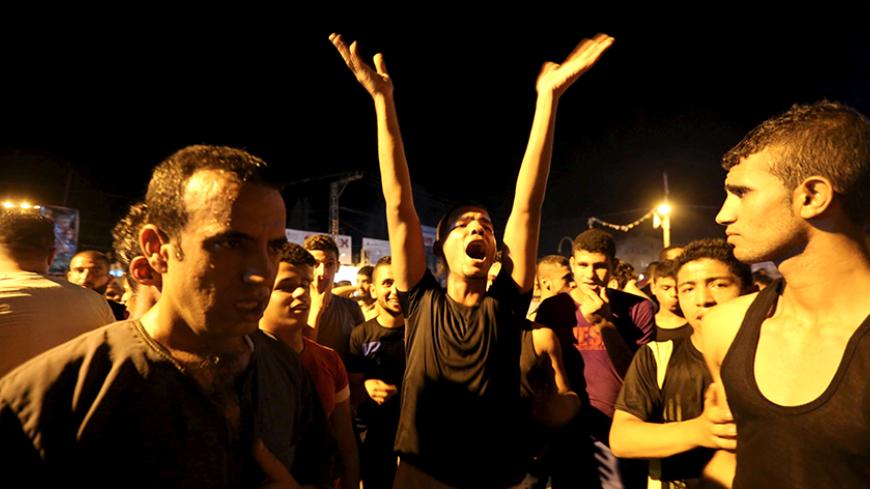 Palestinians take part in a protest against a power crisis in Rafah in the southern Gaza Strip, Sept. 13, 2015. - REUTERS/Ibraheem Abu Mustafa

Palestinians in the Gaza Strip have been suffering from electricity outages since June 28, 2006, when Israel shelled the only electrical power plant in Gaza, in retaliation of the abduction of Israeli soldier Gilad Shalit by Hamas.

Since then, Gazans have not had a power supply that exceeds eight hours in a row on any given day. In early September, the electricity crisis came to a head, and Gazans demonstrated demanding that electricity services be improved.

During a press conference in Gaza on Sept. 10, Mohammed al-Emadi, Qatari ambassador to Gaza and chairman of the National Committee for the Reconstruction of Gaza, said that the committee discussed with Israel the supply of natural gas to Gaza; Israelis expressed their initial consent to this proposal. He added that the Quartet has appointed a special consultant for the project of building a gas pipeline to the Gaza power plant.

The director of Palthink for Strategic Studies, Omar Shaban, told Al-Monitor, “Gaza’s resources for electricity generation consist of the only power plant that depends on industrial diesel imported from Israel, the purchase of electricity from Israel [120 megawatts] and from Egypt [28 megawatts]. The power plant was initially designed to operate on natural gas, of which large amounts were discovered in a field off the Gaza coast in February 2014. The Qatari project serves the Palestinians’ interests and reduces the cost of electricity production by 30%, in light of the unity government’s lack of interest in finding a solution to the power cuts.”

Maj. Gen. Yoav Mordechai, coordinator of Israeli Government Activities in the Territories, revealed on Sept. 13 the Israeli political approval on the Qatari initiative to build a natural gas pipeline to Gaza, in order to resolve the problem of the single power plant, which is not fully operational. He said that an Israeli technical and government team will be examining the areas where the pipeline is supposed to be built.

Many questions can be raised on the reason why Israel gave its consent to the Qatari proposal, which will alleviate the Palestinians’ burden, at a time when it is the one that has imposed a tight siege by land, sea and air on the Gaza Strip since Hamas won the legislative elections in 2006.

Yet, Israel perhaps fears an escalation of the crisis in Gaza should it continue to impose restrictions on Gazans’ daily lives, including electricity cuts. It perhaps wants to ease their burden, and give them something — such as profitable investments and economic projects — they would not want to risk losing by engaging in another war.

Israel provides Gaza with industrial diesel for the power plant that operates on an irregular basis, as it fears that Hamas could use natural gas to produce rockets — which is impossible because natural gas cannot be used in rocket manufacturing.

Israel is examining the possibility of building a gas pipeline from the Leviathan gas field to Gaza, through the Mediterranean Sea, or from the Tamar gas field in Ashkelon in southern Israel to Gaza, and of connecting it directly to the power plant. Qatar and the European Union would be financing the project by injecting billions of dollars.

The Energy Authority's director of information in Gaza, Ahmed Abu al-Amrein, told Al-Monitor, “The Qatari initiative to build a gas pipeline will provide the plant with fuel to operate at full capacity, which is up to 120 megawatts, representing 26% of Gaza’s needs in electrical power — namely an increase of 50 megawatts of the current production, due to the high cost of diesel fuel. It will also reduce the power supply deficit from 50% to 40%, because gas is cheaper. The permanent supply through a gas pipeline will allow us to overcome Israel's closure of the Kerem Shalom crossing. The Qatari project will require four years before it becomes beneficial, and therefore we need a quick implementation and to get past the obstacles.”

The Qatari project will be facing a number of challenges — most importantly, the security obstacles to maintain a stable situation in Gaza and preserve the truce between Hamas and Israel established at the end of the Israeli war on Gaza in August 2014.

Power outages have caused Hamas in Gaza a chronic headache, given that it is the party controlling the Gaza Strip and despite its withdrawal from the government following the Hamas-Fatah reconciliation deal in April 2014. Yet, it seems that Hamas does not guarantee that new military confrontations with Israel will not be ignited, despite being against another war in Gaza, as head of Hamas’ political bureau Khaled Meshaal told Al-Monitor on Nov. 4.

In regard to the technical challenges, once the project is implemented — which requires three to seven years — other problems are likely to arise. Who will be paying the cost of the gas imported from Israel? Will the “blue tax” be imposed on imported gas, as is the case with industrial diesel? Will it spark a crisis between Hamas and the unity government once every other month?

Economic analyst Mohammed Abu Giab told Al-Monitor, “During consultation with the Israeli and Palestinian sides, Qatar made many suggestions to end the electricity crisis once and for all. Following the Israeli political consent, the technical plans to build a gas pipeline were developed by the Palestinian Energy Authority and the General Directorate of Petroleum. I expect the implementation measures of the project to start in the first half of 2016.”

The Qatari project may be perceived as a glimmer of hope for the Palestinians, but the successful implementation of a solution to the problem is not that straightforward. The Israelis want to end the accusation of besieging Gaza, and it seems that they are interested in selling Palestinians the gas needed for the power plant. This could imply an end to the blockade of the Gaza Strip, which means that Hamas’ calls for Israel to lift the siege were met.

The implementation of the project, under direct Qatari supervision, may raise fears within the Palestinian Authority that the Gaza Strip remains out of its control. This is especially true in light of the strategic alliance between Doha and Hamas, with Hamas seemingly welcoming the Qatari project without any reservations.