Turkey is working to resolve the Gaza Strip's energy crisis as part of an economic projects package included in Turkey's reconciliation deal with Israel. 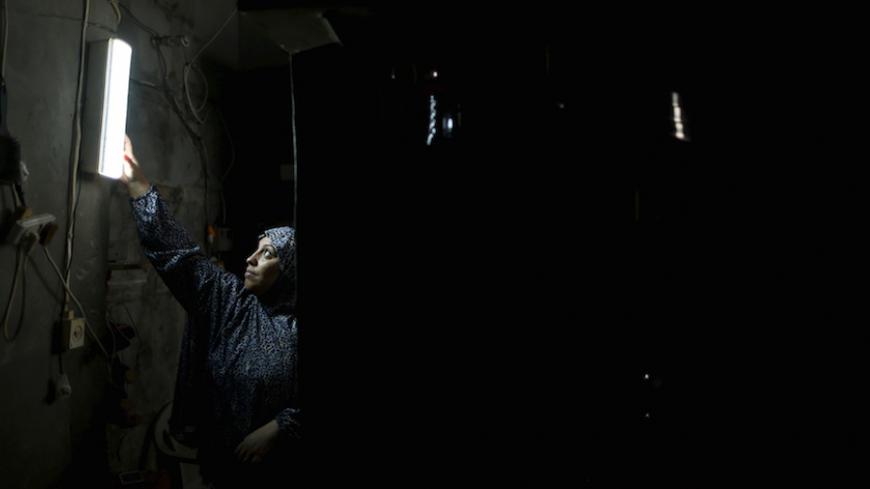 A Palestinian woman hangs a torch inside her house during power cuts at Shati refugee camp in Gaza City, Sept. 15, 2015. - REUTERS/Mohammed Salem

GAZA CITY, Gaza Strip — After failing to persuade Israel to lift its siege on the Gaza Strip, Turkey is taking steps to help Gaza resolve its 10-year-old electricity crisis.

In exchange for normalizing relations with Israel in June, Turkey pledged to provide an economic projects package to Palestinians that includes establishing a power plant in Gaza. Toward that end, a delegation of eight Turkish energy experts, accompanied by Turkey's ambassador to the Palestinian Authority (PA), Mustafa Sarnic, arrived July 12 in Gaza to be briefed on the electricity crisis by the Palestinian Energy and Natural Resources Authority (PENRA) and to study proposed solutions.

The delegation had met with different PA officials and others the day before in Israel to address the crisis. Turkey's state-run Anadolu Agency revealed that the Turkish delegation suggested during the meeting, as it has before, sending an electricity vessel to Gaza's shores, but Israel has yet to respond.

Ahmet Varol, a leader in Turkey's ruling Justice and Development Party (AKP) and the AKP official in charge of Gaza affairs, told Al-Monitor, "The Turkish project to generate electricity in Gaza has begun to be implemented on the ground. Several Turkish officials and experts have arrived to the Palestinian territories to inspect the problem and study the proposed solutions to be raised to the Turkish leadership."

The project will take a year or two to be fully implemented, Varol said.

"The responsibility lies now squarely on the shoulders of the Israelis, who might seek to put a spoke in the wheel of implementation, because all the infrastructure and construction materials for the establishment of the power station will enter Gaza through Israel," he added.

Varol further stated that successive and clear steps are expected to be taken in Gaza in a bid to alleviate the Israeli blockade, through Turkish projects, mainly a solution to the electricity crisis. He stressed that Turkey has not renounced its demand that Israel lift its Gaza blockade. Varol added that getting the blockade lifted will require the PA, the Arab countries and Turkey to use a firm hand with Israel.

The electricity problem in Gaza emerged in 2006 when Israel bombed and destroyed parts of Gaza's only power plant, causing a blackout in the majority of cities and camps and depriving more than 700,000 citizens of electricity for many days.

The plant has been operating at less than 50% of its original capacity since it was bombed. Israeli and Egyptian power lines provide some electricity, but all in all, the Gaza Strip receives a total of 212 megawatts per day while it needs 400 megawatts. Electricity is available for only 12 hours a day.

"The PA has made several proposals to the Turkish delegation, some of which are instant solutions and other strategic, in a bid to overcome the electricity crisis," Fathi al-Sheikh Khalil, the deputy chairman of PENRA in Gaza, told Al-Monitor.

The immediate solutions include supplying the power plant with the necessary fuel to operate at full capacity; it needs 500 tons of fuel per day to run the four generators in the plant. However, the Ministry of Finance in Ramallah imposes taxes of 200% on PENRA in Gaza for the fuel it buys from Israel, making it possible to purchase only 200 tons of fuel per day, enough to run two generators only, Sheikh said.

Other quick solutions include increasing the power line supply from Israel and accelerating the setup of the natural gas pipeline from Israel to the Gaza power station, which Qatar offered to finance a year ago.

One strategic solution the PA proposes is to become part of the Eight Countries Electric Interconnection Project. This would link the Palestinian electricity grid in the Gaza Strip with the Arab network, Sheikh said. Another strategic solution would be to establish a new power plant capable of producing all the electricity needed in Gaza, which is what Turkey has been working on.

Khalil added that the Turkish delegation has been studying the possibility of expanding and repairing the current power plant.

Turkey's official news organization, TRT, reported July 12 that the delegation will submit a detailed report to Turkish Minister of Energy and Natural Resources Berat Albayrak on the production, transmission and distribution of energy, the Gaza infrastructure problems and what could be achieved in the short, medium and long terms. In turn, the minister will present the report to the Turkish government and President Recep Tayyip Erdogan. A road map will then be put forward for implementing approved proposals.

Amjad Shawa is the director of the Palestinian Non-Governmental Organizations Network (PNGO), which was among the mediators when the Palestinian internal parties met about the electricity crisis. Shawa told Al-Monitor, "The electricity bill in the Gaza Strip is the highest in the world, standing at 0.6 kwh per 1 shekel [about 26 cents]. Yet, electricity outages are frequent and widespread in Gaza." He urged a focus on permanent and swift solutions to save time, effort and money to resolve the crisis.

Shawa pointed out that any effort undertaken by local or international parties to end the electricity crisis will face several obstacles, most importantly the Israeli blockade, which is at the basis of the dilemmas plaguing the Gaza Strip.

He expressed hope that future efforts will focus on alternative energy, to liberate Palestinians from Israeli restrictions on electricity. He also called on the PA in Ramallah to cancel any taxes levied on the supply of alternative energy equipment to Gaza.

Gazans, who have become fed up with the electricity problem, are no longer buying any talks about solutions to the crisis until they are effectively implemented. Several promises and proposals have been made before — such as the one to build a gas pipeline from Israel to Gaza with Qatari fundings — but none of them has seen the light of day.