The power crisis and its roots in the Gaza Strip have stirred a heated debate involving mutual accusations between the PA and Hamas, while Palestinians take to the streets to protest the growing problem. 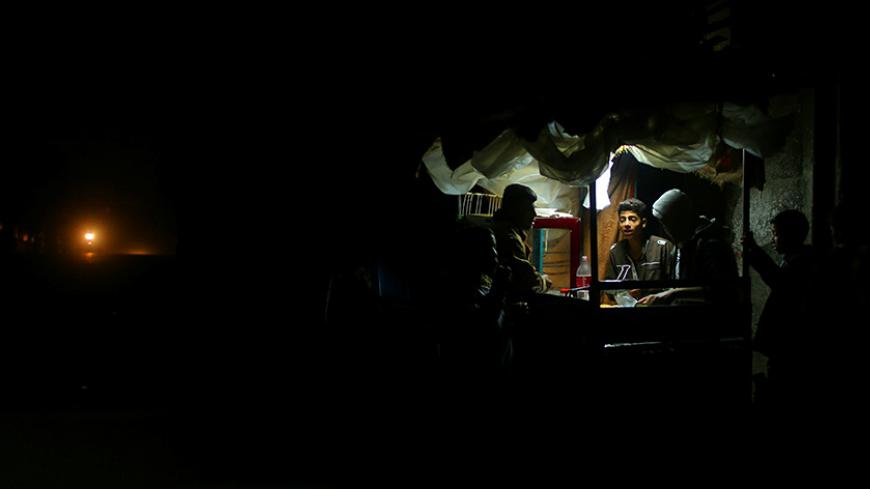 A Palestinian man sells falafel in a roadside shop lit with a lamp powered by a battery during a power cut in Beit Lahiya, northern Gaza Strip, Jan. 11, 2017.

GAZA CITY, Gaza Strip — The power crisis is still disrupting the daily life of Gazans, sparking mutual accusations over its causes between the Palestinian Authority (PA) and Ramallah’s Energy and Natural Resources Authority on the one hand, and between Hamas and its Energy Authority in the Gaza Strip on the other. Meanwhile, 50% of Gaza’s daily electricity needs are not being met.

Exacerbated in the cold winter due to heavy power consumption, the crisis first began when Israel bombed the only power plant in the central Gaza Strip on Jan. 28, 2006. As a result, most cities and camps in the Gaza Strip were left in darkness, with more than 700,000 Gazans deprived of electricity for days. Thus, the issue of renovating and developing this power plant, along with other power sources, has stirred political tension between the PA and Hamas.

In a Jan. 16 press conference, Prime Minister Rami Hamdallah demanded that Hamas hand over all public sectors in the Gaza Strip to the government of national consensus, including the Energy Authority, in order to end the crisis. Hamdallah’s statement came in response to Hamas’ statement on Jan. 11, in which the party approved the Palestinian factions’ proposal of reconstituting the Energy Authority’s board of directors and establishing a higher council for energy in the Gaza Strip.

The mutual accusations escalated when President Mahmoud Abbas, on the sidelines of a press conference held in Ramallah Jan. 17, stated, “Gaza’s power crisis has been laced with mistakes with regard to fuel, power distribution and bills collection, all of which are the responsibility of Gaza’s power authority under Hamas’ rule.”

“Once these issues are redressed, we shall do everything we can to provide electricity,” Abbas added, leading Hamas to believe that the president is responsible for the power crisis in an attempt to pressure Gazans and pit them against Hamas.

Since the beginning of 2017 there have been many protests in Gaza against the ongoing power crisis. This led Ismail Haniyeh, the deputy chairman of Hamas’ political bureau, to engage in talks with the Turkish presidency and the Qatari emir. These talks resulted in Turkey’s pledge Jan. 14 to provide 15,000 tons of diesel oil necessary to run the only power plant in the Gaza Strip, while on Jan. 16 the Qatari emir ordered $12 million in assistance to buy fuel.

These efforts have yielded a partial solution for the electricity shortages, increasing the number of supply hours. According to the head of the Palestinian Energy and Natural Resources Authority Dhafer Melhem in a Jan. 16 press statement, this is a temporary solution that is far from solving the problem completely. Melhem demanded that the consensus government and the Energy Authority in Ramallah be allowed to freely operate in Gaza in order to reach a permanent solution.

Yahya Moussa, a Hamas leader and member of the Palestinian Legislative Council, told Al-Monitor, “The PA is responsible for solving the power crisis since it is the internationally recognized Palestinian authority to conclude agreements, not Hamas.”

Moussa urged Abbas to be transparent with the people and admit that he is the one standing in the way of international agreements and projects aimed at putting an end to the problem. These projects include a Qatari project to establish a solar energy station east of Gaza, the 161 power line project to be established from Israel to Gaza, as well as the United Arab Emirates project to build a power station that would provide Gaza with 500 megawatts (MW) of its electricity needs.

In turn, the head of the information and public relations department at Gaza’s Energy Authority Mohammad Tabet told Al-Monitor, “There are 252,000 subscriptions to the power network in Gaza including 60,000 subscribers who don’t pay their monthly bills. This means that only 48% of Gaza’s monthly power bill is collected, one that ranges between 45-50 million shekels ($11.8 million-$13.2 million) per month.”

Tabet revealed that the Energy Authority is poised to take legal action in the upcoming days against those who can afford to pay their bills but fail to pay, adding that part of the solution requires all the subscribers to pay their dues.

In the Gaza Strip, power sources vary between what is generated by the power plant that currently runs at half capacity (60 MW) and even less after its bombing, a power grid linking Gaza to Israel (120 MW) and another one linking it to Egypt (32 MW). This amounts to only eight hours of power supply per day. Gaza needs 400 MW daily compared to the current 212 MW output.

In an interview with Al-Monitor, political analyst Mohsen Abu Ramadan held the PA responsible for the power crisis in the Gaza Strip given its capacity to conclude international agreements. At the same time, Abu Ramadan urged Hamas to implement the decisions reached with Palestinian factions during a workshop held in Gaza on Jan. 14. Among these decisions are the formation of a national monitoring committee tasked with finding a solution and obliging public institutions run by Hamas to pay their electricity bill.

“Many projects and proposals were presented to the PA years ago to solve the problem, such as increasing the output of the power grid linking Gaza to Israel through the 161 line proposed by Gaza’s Energy Authority; the Arab Eight Country Interconnection Project that the PA approved in 2012, but then backed out for lack of official decision to implement the project; and the installation of a natural gas line by Qatar for Gaza’s Energy Authority among others. However, none of these saw the light of day,” Abu Ramadan said.

Speaking to Al-Monitor, political analyst Asad Abu Sharkh concurred with Abu Ramadan in blaming the PA for the power shortages in the Gaza Strip, pointing out that the problem started back in 1994 with the inception of the PA and its establishment of a power plant in Gaza with low-quality turbines. In addition, the PA withdrew from Gaza’s municipalities the authorization to supply power and collect electricity bills, and handed it over to the power plant and company, which was run by the PA.

He added, “The Gaza Strip stopped receiving the same amount of attention from the PA as that of the West Bank after Hamas came into power [in Gaza].”

No permanent solutions to Gaza’s power crisis loom on the horizon. The crisis is expected to re-emerge once the quantities of fuel provided by Qatar and Turkey run out after three months.