Why Abbas asked Israel to cut power to Gaza

The Palestinian Authority has asked Israel to stop providing funding for Gaza's electricity as part of President Mahmoud Abbas’ efforts to pressure Hamas into ceding power. 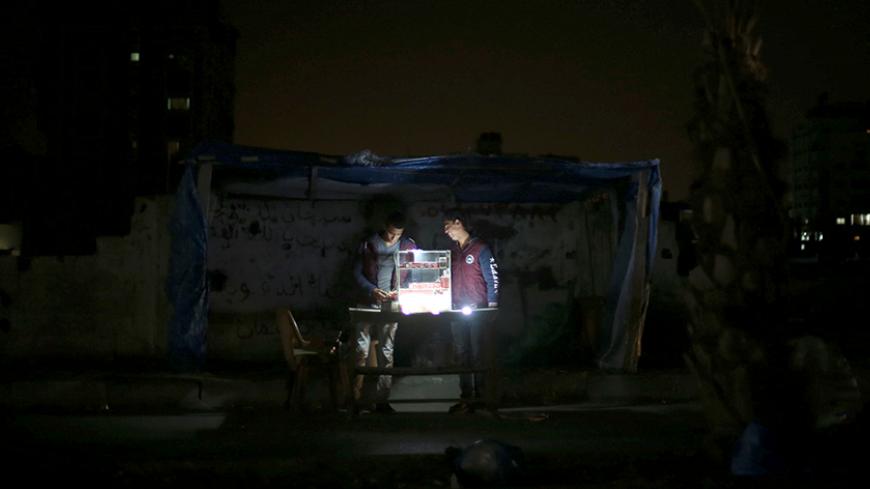 GAZA CITY, Gaza Strip — Several Israeli media outlets, including Israel’s Channel 10, reported April 27 that the Palestinian Authority had asked the Israeli Coordinator of Government Activities in the Territories to stop funding electricity for the Gaza Strip.

Channel 10 reported that the PA submitted a formal request to the body's head, Yoav Mordechai, to halt funding in the amount of 40 million shekels ($12 million) a month, which Israel withholds from Palestinian tax revenues. However, Israel did not respond to the Palestinian demand and continued to supply electricity to Gaza.

The request appears to be part of the PA’s plan to pressure Hamas to hand over control of the Gaza Strip. Gazans rallied to condemn the Palestinian request.

Fathy Sheikh Khalil, deputy head of the Palestinian Energy Authority (PEA) in Gaza, told Al-Monitor, “We contacted the concerned Israeli authorities, who confirmed that the PA did in fact make the request to Israel.”

Al-Monitor contacted PA officials about the matter, but they declined to comment.

PEA acting director Zafer Melhem told the Palestinian daily newspaper Al-Ayyam April 28 that the PA is likely to try to halt the electricity supplies in Gaza should “the officials of the electricity company in Gaza governorates continue to collect taxes without sending them to the PA treasury in Ramallah.” When asked about Channel 10's report, he said no Palestinian party informed him that the PA had made such a request.

Sheikh Khalil said that the Israeli lines supplying Gaza with 120 megawatts are the only source of electricity in Gaza after Egyptian power lines halted operations April 20 for maintenance and the only power plant in Gaza stopped operating April 9 due to lack of fuel. The PEA refused to continue to purchase fuel with the heavy taxes imposed on it by the PA, which pushes costs to 270% of the fuel’s original price.

Sheikh Khalil warned that should Israel decide to halt the supply of electricity to Gaza via its lines, which provide a portion of Gaza’s energy needs, amounting to a total of 450-500 megawatts a day, Gaza will face a complete blackout, which could lead to environmental and health disasters.

Electricity is available in Gaza homes for only three to four hours a day. Some citizens get a few extra hours of electricity from small generators.

Sheikh Khalil further noted that the PEA has been in contact with several donor countries in the past several days, including Qatar and Turkey, to try to solve the problem and pressure the PA to supply fuel to Gaza’s power plant tax-free.

On April 25, Israel’s Yedioth Ahronoth quoted an unnamed Israel Defense Forces officer as saying, “The Gaza Strip will live without electricity in the next few days. … It is important to know how Hamas will act. Will it continue to strengthen its military structure, or will it mobilize its efforts to solve the electricity problem?”

Qassem warned Israel not to comply with the PA's request because it would bring Gaza into major crises. Speaking to Al-Monitor, he called on the PA to ease the siege on the Gaza Strip and treat it as part of the Palestinian homeland.

Until recently, Gaza partially relied on its own power station that has run out of fuel. The station supplied Gaza with 60 megawatts a day. The Israeli lines supply Gaza with 120 megawatts, while Egyptian lines that provided 32 megawatts are currently out of order.

Political analyst and former head of the Palestinian Non-Governmental Organizations Network Mohsen Abu Ramadan told Al-Monitor that Israel has a consistent policy of not tightening the siege on the Gaza Strip, as a crisis would have undesirable results — potentially including violent reactions by Hamas.

He does not believe that the PA's pressure on Hamas will succeed. “On April 27, the PA announced that it will no longer pay for the electricity Israel supplies to Gaza. Before that, it cut 30% of the salaries of PA employees in Gaza to pressure Hamas to hand over Gaza,” he said.

Abu Ramadan explained that there are no feasible alternatives for Hamas and the PEA, as alternative sources of energy such as large generators and solar cells are very scarce. He added, “A radical solution to the problem would be for Hamas to hand over control of the Gaza Strip in return for Fatah ending its dominance over the Palestinian political system, to include Hamas in the PLO and its Temporary Leadership Framework and to maximize [the PA's] partnership with Hamas.”

Mustafa al-Sawaf, a political analyst and former editor-in-chief of Felesteen newspaper, told Al-Monitor, “Israel probably denied the PA’s request to stop the electricity supply through its lines out of fear that the situation in Gaza would spiral out of control. Israel wants to avoid an explosion in the Gaza Strip and is not ready to face one now.”

He said that Hamas’ leadership is in constant contact with several donor countries that consider Abbas’ actions toward Gazans inhumane.

Several economists believe Abbas will continue to pressure Gaza and Hamas, while local and international bodies, including the International Committee of the Red Cross, warn that the perpetuation of the electricity crisis in Gaza will lead to health and environmental disasters.