New batch of PA employees in Gaza forced to retire

The Palestinian Authority referred more than 6,000 civil employees to early retirement, allegedly to exert pressure on Hamas to dissolve the administrative committee, hand over the Gaza Strip and approve elections. 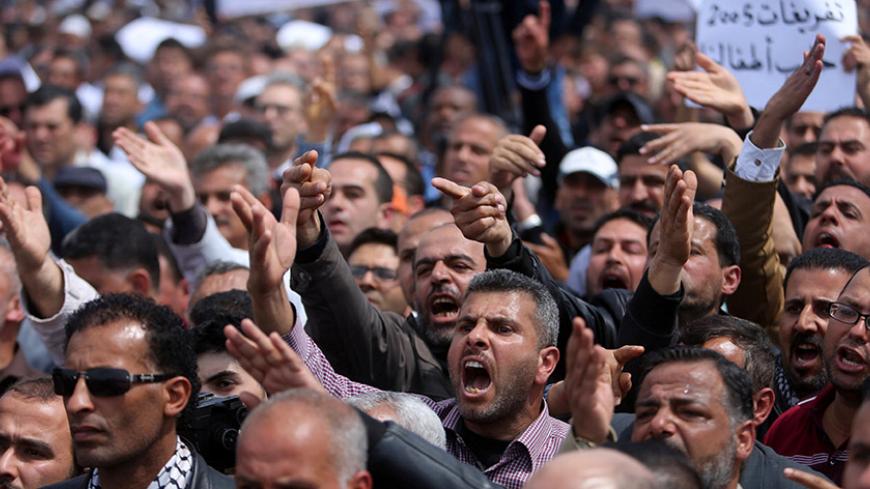 Palestinian Authority employees take part in a protest against what they say are deductions in their salaries, in Gaza City, Gaza Strip, April 8, 2017. - REUTERS/Ibraheem Abu Mustafa

In an official statement, the government described this move as a temporary measure that may be lifted when Hamas waives its control of the Gaza Strip and accepts the conditions set by President Mahmoud Abbas.

Abbas had set as conditions for reconciliation disbanding the administrative committee in Gaza and enabling the government of national consensus from assuming its full responsibilities and preparing for the general elections.

Tariq Rishmawi, a spokesman for the government of national consensus, told Al-Monitor, “The government decided to refer 6,145 employees from Gaza to early retirement as a complementary step to its previous and future measures aimed to pressure Hamas to end the division.”

The Palestinian Authority (PA) had approved a series of measures against the Gaza Strip. On April 4, Gaza’s employees saw their salaries slashed by 30-50%, while on April 11, social assistance was denied to 630 families in Gaza, 277 Hamas-released prisoners no longer received their monthly salaries as of June, payment to Israel for Gaza’s power supplies was halted on April 27 and the salaries of Hamas parliamentarians in the West Bank were cut.

Rishmawi said, “The competent authorities are finalizing the required procedures to inform employees of their retirement arrangement according to the law." He noted, "The government will take any [required] action it deems appropriate to end the division,” in reference to the possibility of referring to retirement a new batch of employees.

“Should Hamas yield to the PA’s demands, the government [of national consensus] will immediately begin implementing a plan to get Gaza out of its darkness, by carrying out a series of vital projects that will bring life back to the Gaza Strip," he added.

In a July 4 statement to Alestqlal, Islamic Jihad's biweekly newspaper, Hamas spokesman Fawzi Barhoum said the measures taken by Abbas against the PA employees in Gaza are inhumane and have nothing to do with ending the division.

“Arbitrary repressive measures are crimes against humanity and require taking national and legal steps to hold the perpetrator accountable,” the statement read.

The PA’s decision to refer 6,145 civil employees to retirement came against the backdrop of Egypt’s supply to Gaza of industrial diesel on June 12 and the operation of the power plant in the Gaza Strip.

The Palestinian government seemed to be infuriated by this arrangement, and press reports noted the referral to early retirement included all of the PA employees in the Palestinian Energy and Natural Resources Authority (PENRA) in the Gaza Strip as a reaction to the operation of Gaza’s sole power plant.

PENRA acting director Zafer Melhem told Al-Monitor, “There are 114 PENRA employees in Gaza; the workers who will be referred to retirement are mainly those who are not performing their duties.”

He said their numbers have yet to be determined and denied any relation between the retirement referral decision and the supply of diesel fuel to the Gaza Strip.

“We have no problem with Gaza receiving diesel supplies from any country. We are willing to supply Gaza’s power station with diesel, just like we did before, if the plant will transfer to the PA government the price of the diesel supplies along with the taxes,” Melhem said.

PENRA in Gaza has refused to continue buying fuel under the heavy taxes imposed on it by the PA, which increases costs to 270% of the fuel’s original price.

He added, “The Gaza Electricity Distribution Company has money now and can buy fuel in cash from Egypt. When the government asked it to buy fuel for the plant from Israel it did not respond since it did not want to pay the price of fuel with the tax.”

While the government says its measures and decisions aim to pressure Hamas, no one knows how they will achieve positive results, especially as the PA has been referring to retirement and cutting the salaries of its own employees in Gaza.

The July 4 decision seems to be linked to the announcement in February by the European Union of adopting a new financial support policy in the Gaza Strip in coordination with the PA, based on halting the transfer of European support funds for the payment of salaries of PA employees in Gaza and channeling these funds to support poor families and finance economic development projects.

Although Abu Jarad said that none of the PA employees in Gaza have received a notice of referral to retirement so far, the chairman of the board of directors for the Palestinian Pension Agency, Ahmad al-Majdalani, told Al-Monitor that the agency is working to implement the PA's decision.

He added, “This is the second batch of PA employees in the Gaza Strip to be referred to retirement. A number of PA military employees in Gaza have already retired under the early retirement law. Work is underway to determine who to include in the decision, the age groups and state departments and institutions, as well as all other administrative procedures."

Abu Jarad described the government's decision as illegal and illogical in light of the suffocating siege on the Gaza Strip. He said, “This decision has serious economic and social repercussions on employees who depend on their salaries to meet their financial obligations, such as bank loans. This would lead to a dire setback following the salary cuts of employees in April, which negatively affected the social and economic life in the Gaza Strip.”

As the government of consensus and the PA insist on exerting pressure on Hamas, allegedly to dissolve the administrative committee, hand over control of Gaza to the government and approve elections, all options are available, including the forced retirement of all civilian and military personnel in the Gaza Strip.