The Palestinian Authority will begin forcing about half of its military staff in the Gaza Strip to retire in a move it hopes will ease its financial crisis and put pressure on Hamas, despite fears that the move is likely to make both situations worse. 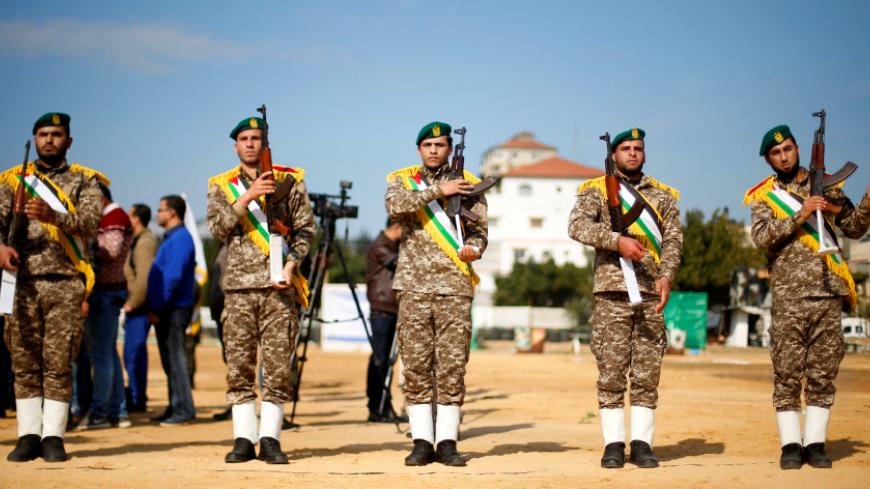 GAZA CITY, Gaza Strip — The Palestinian Authority (PA) is set to enact in June a controversial law that will force about half of Gaza's security personnel to retire, while leaving the West Bank's force intact. Officials in the security services have started contacting staff members to inform them of the change.

Some economic experts say the austerity measures — in part meant to solve the struggling PA's financial crisis — remain unviable in light of a weak economy that relies on donors and tax funds, without creating new development projects. Such measures merely reflect a political dispute rather than addressing the economic problem, they say.

Until June, every member of the Palestinian security forces is entitled to optional early retirement, provided that he is at least 45 years old if he is an officer and at least 35 if a noncommissioned officer or staff member, with a monthly pension of at least 70% of his salary.

However, under the move being imposed by PA President Mahmoud Abbas, all military staff in Gaza born as of June 31, 1966, must retire, while those born after that date will have the option of voluntary retirement.

Abbas approved the law directly, without a vote by the suspended Palestinian Legislative Council. As a result, the Advisory and Legislation Bureau in Gaza deems the law unconstitutional, but the bureau's opposition isn't expected to have any impact.

Aref Abu Jarad, head of the PA employees’ union in Gaza, told Al-Monitor, “The law will apply to 50% of the PA’s military staff in Gaza and will be mandatory for those above the determined age. … It is, however, optional for military staff in the West Bank, regardless of their age.”

Abu Jarad called on all military staff in Gaza to raise their voices against the retirement law, which he said is "unfair."

"The 30% cut to their salaries is a preliminary step for making them subject to the retirement law soon. This means that the PA is evading all of its financial and political responsibilities in Gaza, keeping Hamas fully in charge," Abu Jarad said.

Hamas leaders believe the move is Abbas' latest action to squeeze Hamas financially to get it to turn over control of the strip, which it has held since the PA split in 2007. Abbas' party, Fatah, administers the West Bank. The thinking is that if Hamas wishes to continue to control the Gaza Strip, it must accept financial responsibility for it.

In April, the PA cut 30% from the salaries of its civil servants in Gaza. Senior Fatah officials told Al-Monitor at the time that, since the 2007 split, the PA has continued to pay its tens of thousands of employees there who were fired by Hamas.

Until the end of 2016, the PA employed a total of 156,000 civil and military personnel; that figure included 62,000 employees in Gaza — 26,000 of whom are civil servants and 36,000 military staff, according to Farid Ghannam, the director of the Budget Department at the Palestinian Ministry of Finance.

Gaza PA officers and members of the security services are the nuclei of the security apparatus formed by the PA after it received the Gaza Strip and Jericho when the Oslo Accord was implemented in 1993.

Asked whether the PA's move to impose early retirement aims to address its financial crisis, retired Maj. Gen. Yusuf al-Sharqawi from Gaza told Al-Monitor, “The pensioning of military staff members — who have not been working since the Hamas takeover of Gaza — is better for them than to enter into new political confrontations.”

Sharqawi added, “During his premiership in January 2012, Salam Fayyad put forward the idea of enforcing the early retirement law on PA employees, especially Gaza employees with privileges and incentives greater than those offered today, in a bid to reduce the PA budget deficit. Early retirement will not solve the financial crisis; it will only create new problems for the Palestinian pension and social security funds."

Sharqawi said the decision is part of the pressures exerted by the PA on Hamas in Gaza, in light of the failure by Hamas and Fatah to reconcile and end their differences so as to put an end to the country’s political and economic crises. “This move will weaken the Palestinian position and is a preliminary move toward the complete separation of Gaza from the West Bank,” he added.

Economics professor Mouin Ragab from Al-Azhar University in Gaza told Al-Monitor, “Early retirement will negatively affect the economic situation in Gaza, since the 30% cut resulting from retirement will weaken … purchasing power in the Gaza Strip.”

Ragab added, “The PA will not solve the issue by making cuts in the salary of its employees. The marginalized and dependent Palestinian economy is unable to create new job opportunities to stop the growing unemployment rate, especially among graduates and young people. Instead of the salary cuts, the PA ought to start development projects, and not relief, to ease the dire Palestinian economic situation.”

Ola Awa, the head of the Palestinian Central Bureau of Statistics, pointed out during an April 30 presentation of her report on the Palestinian workers’ situation, “The number of unemployed in 2016 was estimated at 361,000 people, including 154,000 in the West Bank and 207,000 in the Gaza Strip.”

“Things are quickly taking a bad turn, starting from the deduction of the transportation allowances for employees in Gaza, then a partial salary cut and now forcing staff into early retirement and cutting off their salaries. This does not serve the Palestinian situation. There must be alternative solutions to the financial problems plaguing the PA — solutions based on encouraging investment to create jobs,” Karim said.

According to a World Bank report sent to donor group Ad Hoc Liaison Committee, which met May 4 in Brussels, the PA is suffering from a financing gap of $800 million and has to face declining donor assistance by addressing government spending on salaries and pensions and improving local tax collection.

Marina Wes, the World Bank’s country director for the West Bank and Gaza Strip, had said in an April 27 press release, “The Palestinian economy is failing to generate jobs and incomes. One-third of Palestinians are out of work and more than half of the youth in Gaza are jobless. Gaza is on the verge of a human catastrophe.”