The Palestinian government instructed ministries to collect data on their public servants so they can be paid properly. 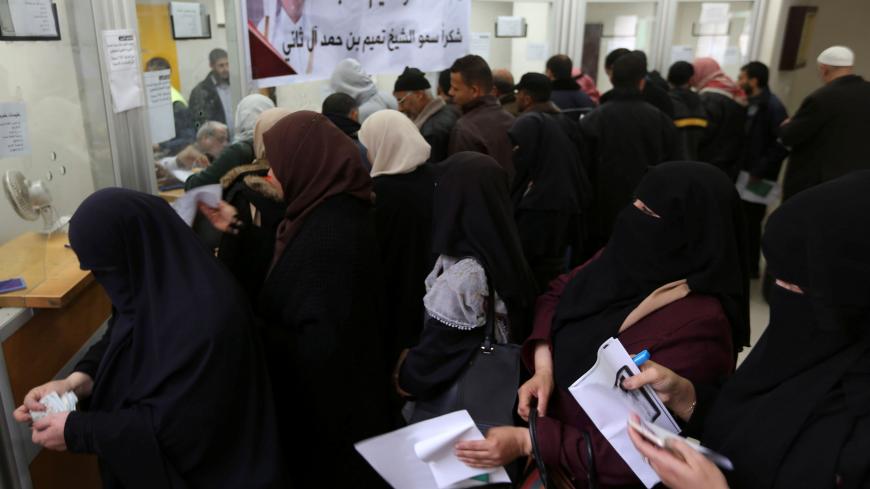 RAMALLAH, West Bank — The Ramallah-based Palestinian government decided Sept. 9 to assign ministries the task of updating the data of their civil servants in the Gaza Strip in order to address all issues related to their unpaid salaries.

The decision follows the pledge of Palestinian Prime Minister Mohammad Shtayyeh who vowed Sept. 4 in a video message on Facebook addressed to the Gaza employees to conduct a review of all staff conditions and implement workable solutions. “The government inherited the financial problems in Gaza. These problems are not something new,” Shtayyeh said.

“The current [Palestinian] government and previous governments did not control or manage the coastal enclave. It is inconceivable to run the sector remotely. There is no accurate and detailed information about the employees, whether with regard to their sick leaves, their whereabouts, who is traveling or who is not, who deserves a bonus, who changed their work or area, among other things,” he added.

The government made its decision after it came under a storm of criticism and accusations when it disbursed the salaries of public employees Sept. 1 in both the Gaza Strip and the West Bank. The government was accused by several factions, including Fatah, of discriminating between public servants in Gaza and the West Bank in terms of salary disbursement, which contradicts Shtayyeh’s pledge Aug. 22 to pay all civil servants on an equal footing.

“The government said that the issue of the salaries of public servants in the Gaza Strip and the West Bank will be addressed on an equal footing, but it did not keep its promise,” Helles was quoted as saying in the Gaza Strip's Felesteen newspaper Sept. 2. This prompted several Fatah leaders in Gaza to resign in protest.

Shtayyeh announced Aug. 22 that his government had made a strategic decision at the behest of the president to end the discriminatory salary disbursement between the Gaza Strip and the West Bank, which raised optimism of Gaza’s public servants. Those hoped that the government would end the sanctions imposed on salaries two years ago when the Rami Hamdallah government deducted between 30% and 50% of salaries in a bid to pressure Hamas to activate the administrative committee of the Gaza Strip, which operated as a parallel government. Hamas was instead collecting revenues without sending them to the treasury, which generated liabilities until this day, followed by early retirements by thousands of employees.

“The government inherited a heavy legacy from successive governments, especially from the previous one. Some employees are retired, and others were forced into early retirement. Some of them are not even aware of that. The government does not have accurate information about what is happening in the ministries in Gaza because of the internal [Palestinian] division,” Amjad Ghanem, secretary-general of the Palestinian Cabinet, told Al-Monitor.

Ghanem said the government made the decision to instruct the ministries to update the public servants’ data in Gaza in order to collect as much information as possible and look into their status to take an appropriate decision.

He said there is confusion because employees expect to receive a certain salary based on their understanding of their job situation, while the government is paying salaries based on the information it has.

Among the other pending issues that the government needs to address is the issue of former military staff who were relieved of their duties in 2005 and integrated into the civil service. Those amount to 8,000 public servants in Gaza, mostly members of Al-Aqsa Martyrs' Brigades, Fatah’s military wing.

Those incorporated into the Palestinian security services in exchange for halting their activities in the second Al-Aqsa intifada were let off the hook by Israel. This happened through an agreement between President Mahmoud Abbas and the Israeli side, but the successive Palestinian governments did not recognize them as employees or pay them a monthly bonus of 1,500 shekels ($426).

Rami Abu Karsh, spokesman for the former “2005 former military staff,” told Al-Monitor, “Successive governments have treated us with racism and discrimination, disregarding the Basic Law, unlike our counterparts in the West Bank numbering 7,000 who are treated as official workers with bonuses, rights and raises.”

“Former Prime Minister Salam Fayyad removed us from the military institution without any legal support in 2007. The problem persisted until 2010 when we were offered a monthly military stipend of $284, which was raised to $426 a few months later. At the start of the financial crisis in Palestinian Authority (PA), we were given 750 shekels ($213),” Abu Karsh said.

He explained that, in 2017, the PA deducted 30% of the salaries of Gaza civil servants as part of the sanctions on the coastal enclave.

“Shtayyeh talked about the standardization of the salary rates. We were surprised when the salaries were disbursed in the banks; the 2005 former military staff received only 750 shekels ($213), and even the civil and military servants only got between 60% of the already reduced salaries," Abu Karsh said. Meanwhile, the West Bank employees got 60% of their full salaries, he concluded.

“The government is working on solving this issue. The prime minister seeks to fulfill his promises, although it is a bit far-fetched since the president has the final say in this,” Dargan said.