Gaza’s universities are cutting professors’ salaries, reducing grants and increasing tuition fees as a result of the financial crisis plaguing the Gaza Strip. 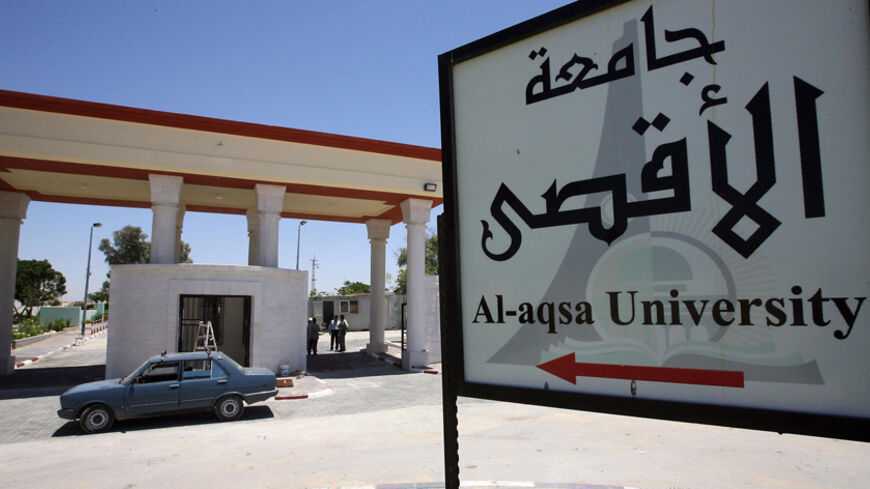 GAZA CITY, Gaza Strip — Mohammad Tayseer cannot afford the media faculty fees at Al-Aqsa University, although majoring in journalism has always been his dream. He loves photography and aspires to become a well-known journalist.

After Tayseer insisted with his father, the young would-be journalist managed to secure, with difficulty, $250 for the first semester. “I thought we only had to pay the enrollment fees, but then I realized that there would be daily transportation fees from the south of the Gaza Strip to Gaza City. I also need a laptop to write articles and a camera to take pictures. I don't know what to do,” he told Al-Monitor.

Tayseer is not alone in facing such constraints. The administrations of Palestinian universities in the Gaza Strip are equally restricted, as they have been facing a severe financial crisis for about five years, and the crisis has intensified following the war on the Gaza Strip.

Asked about this crisis, the deputy chairman of external affairs at the Islamic University, Yahya Sarraj, told Al-Monitor, “Since early 2014, the 1,040 staff members working at the university are getting 70% of their salaries, and if the current crisis lasts, then they might start receiving half of their salaries. Moreover, university scholarships cost the university 2.5 million Jordanian dinars a year [$3.5 million], and we have reduced 30% of them.”

Sarraj said that the university’s annual deficit reaches about $10 million and indicated that the deepening siege and war have led to a dramatic decrease of the grants offered to the university by countries in the region. Moreover, the financial obligations of the Palestinian Authority (PA) in the West Bank have not been settled yet with the university.

The interview with Sarraj took place in the remaining part of the Islamic University’s administrative building, which was bombed by the Israeli army during the recent war. “We have not rebuilt the building yet because of this fundamental crisis,” Sarraj said.

Sarraj does not deny that 22 employees on temporary contracts have been laid off in an attempt to reduce the expenses of the university. This has, however, increased the burden on other teachers with permanent contracts.

Hassan Qanouh, who has taught 550 university graduates in the computer engineering department at the Islamic University, was one of those employees whose contract ended. Qanouh told Al-Monitor that he did not take it personally since it was a legal matter. “Any contract ending causes hardship, but I finally found a job at another university,” he said.

The student council at the Islamic University had, for the first time in seven years, agreed to protest in September 2013 against the decision of the university administration to abolish minimum fees, but it was not long before the administration reversed its decision.

At the same time, the student council of Birzeit University in the West Bank shut down their university for two weeks after the administration raised the tuition fees under the pretext of its budget deficit. The crisis ended with intense altercations and led to the dismissal of some students. It should be noted that 54% of the government budget in Ramallah in 2013 had been allocated to the salaries of the police and government employees: nearly $1 billion (26% of the budget) to security and 16% to education.

Aya Hassouna, student and president of the student council at the Islamic University, believes that the university’s decision to reduce grants and exemptions to 70% of students was difficult for everyone, especially after the war and the deterioration of the economic situation of the students. “But after we talked with the university administration, we found that it was a better option than raising the fees for all students,” she told Al-Monitor.

Al-Monitor learned from a source in the Islamic University’s administration, who preferred to remain anonymous, that the unofficial grants to the university amounting to millions of dollars from Saudi Arabia and the United Arab Emirates, as well as the support of some US government agencies, have almost completely stalled in recent years, especially after 2013, when the university was thought to be affiliated with Hamas and the Muslim Brotherhood.

“The university boasts about the fact that it is independent, and the administration does not and is keen not to receive any orders from any political movement, regardless of what the people repeatedly say about our affiliations,” Sarraj said. He also said the university has never received any direct support from Hamas.

“We haven’t even received the aid that Ismail Haniyeh once pledged when he was head of the Gaza government,” he added.

At Al-Azhar University, the financial crisis is so severe that the employees' salaries are being deducted from their end-of-service bonus. Ali al-Najjar, vice president for administrative and financial affairs, said, “Our salaries are now deducted from our end-of-service bonus to eliminate the deficit. Late President Yasser Arafat used to say that this bonus was a red line, but we have crossed it now, and we have incurred debt in the past five years amounting to $25 million. We have to pay off this debt to the employees.”

Najjar said student exemptions and grants cost the university 2 million Jordanian dinars ($2.8 million) annually, given the conditions plaguing the Gaza Strip, which is going through the most difficult financial hardship in recent history.

“The university is going through a difficult financial period, as aid from the PA in Ramallah completely stopped in December 2009. The university used to receive $450,000 each month,” Najjar said.

He said in 2010, President Mahmoud Abbas said that 500,000 Jordanian dinars ($705,220) were allocated to Al-Azhar University. The president was subsequently asked five times about the transfer of this sum of money, and he kept saying that he gave the disbursement order to former Prime Minister Salam Fayyad. Now the issue is in the hands of Prime Minister Rami Hamdallah, but the money has not been disbursed yet.

Najjar said the disastrous consequences will be more apparent between 2018 and 2020, when 60 employees at the university will be due to receive their pension and will find that their end-of-service bonus has been consumed. He stressed that the solution to the crisis plaguing Palestinian universities would be the restoration of the government grants that used to amount to $5 million a year for each university.

“Some professors are requesting chairs and computers for their offices, but I am signing these requests with the following words: until we secure enough money and liquidity,” he said.

The global QS ranking for the top 50 Arab universities did not include Palestinian universities this year. Once upon a time, it included Birzeit University, the Islamic University and An-Najah University.