Why some Gazan professors are selling their homes

The financial crisis plaguing the Islamic University in the Gaza Strip forced some of its employees to seek the help of charitable institutions. 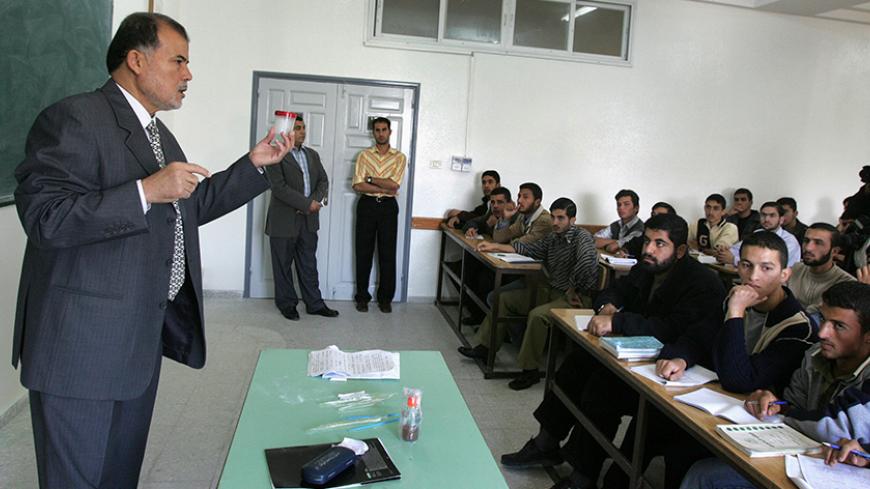 A lecturer stands before a class at the Islamic University in Gaza, Nov. 13, 2006. - REUTERS/Mohammed Salem

GAZA CITY, Gaza Strip — The Islamic University of Gaza — which is one of the largest and most prestigious universities in the Gaza Strip — has been battling a financial crisis for 2½ years now.

The repercussions of this crisis have started to clearly manifest; the university closed its gates for three days in January following disagreements between its administration and its staff union about the rights of employees at the university. The union subsequently resigned.

The Islamic University, which was founded in 1978 as the first university in the Gaza Strip, is now suffering a severe financial crisis affecting the living standards of its staff. In mid-2014, the university’s administration issued a decision to implement a 40% reduction in the monthly salaries of its staff.

These substantial income cuts led the university staff to resort to applying for financial aid provided by various charities. Riyad Shahin, a history professor at the Islamic University, who also serves as chairman of al-Riyad Charity Society in Gaza City, told Al-Monitor that some of the university staff have applied to his charity seeking financial support.

He said, “After the 40% salary cut, employees were no longer able to provide for their families. Some of them took out bank loans. The reduced salaries are not enough to cover their needs. Moreover, the delay in the payment of these salary cuts worsened the employees’ financial situation to the point that they sought the help of charities. We then provided them with financial aid.”

Shahin said that after the substantial salary cuts and the deduction of bank loans, the monthly salary of some employees dropped to less than $200 — where it had been around $1,000 before — which has forced many to sell their homes or cars.

According to Kamal Ghoneim, former head of the staff union and professor of literature at the Islamic University, over the last 15 years, several factors have contributed to the financial crisis that now plagues one of Gaza’s largest higher education institutions.

Ghoneim told Al-Monitor, “One of the main causes that deepened the financial crisis is that the university has not raised its tuition fees during the past 15 years, taking into consideration the harsh economic conditions of the residents in the Gaza Strip. The Palestinian internal divide prevented the Islamic University — just like other universities — from obtaining its dues from the Ministry of Education and Higher Education in Ramallah. The amounts due are estimated at approximately $20 million.”

Ghoneim believes that the university’s rejection of a number of proposals made by the staff union to overcome the financial crisis and its execution of its own proposals — such as the salary cuts that undermine the staff’s interest and restrict their rights — is yet another reason that further exacerbated the crisis.

He said that the university implemented high salary cuts on a permanent basis and laid off a big part of its personnel.

Ghoneim explained, “We suggested that [faculties] coordinate in order to decrease the admission score rate so that a greater number of students could be accepted, launching educational projects such as the parallel education program, master's programs, endowments projects such as libraries and shops around the university, and residential towers that allow the university to spend money on students who are not able to pay. A number of other ideas [include] the ongoing flow of liquidity and uninterrupted education, so as not to remain under the mercy of grants from international and Arab organizations. Yet they have not been implemented given the administration’s rejection.”

However, the university administration, which employs 400 people, continues to implement procedures such as reducing the employees’ salaries and the university expenses. Musheer Amer, director of public relations at the university, told Al-Monitor that they will continue with these procedures to resolve, or at least mitigate, the crisis in order for the university to survive and be financially and administratively stable.

Amer noted that the university is affected by the Palestinian economic crisis, which made it necessary to take certain measures to face the crisis.

He said, “We suggested a 10% pay cut for the university administrative staff and academics, which will not be counted as part of their salary, to ease the financial crisis, and a 40% pay cut within their salary, which employees get back if there is money in the university’s treasury. Before the staff union resigned, they also rejected to increase the number of courses and hours of each professor and reduce the retirement age from 65 to 60 years old.”

Ayman al-Yazouri, deputy undersecretary of higher education at Gaza’s Education Ministry, told Al-Monitor that the other universities in the Gaza Strip are also plagued by the financial crisis. Their struggles, however, have not been revealed so far.

Yazouri said that the Israeli blockade and economic crises in the Gaza Strip have cast their shadow on all public universities that operate to gain a profit, such as the Islamic University, as the economic situation of the students’ families keeps deteriorating.

He added, “Many students are not paying the university tuition fees due to financial issues, which has forced universities such as the Islamic University and Al-Azhar University to delay the payment of tuition fees for months or years after graduation.”

In addition to the employees’ salary cuts, Yazouri anticipates that “the tuition fees might increase for some majors at the Islamic University in order to alleviate the crisis [they are facing]. Yet [this increase] will be made in a way that does not exceed the financial ceiling adopted by the other public universities.”

The financial crisis plaguing the Islamic University reveals that the higher education system in the Gaza Strip is economically vulnerable and raises the alarm to protect a number of big educational institutions in Gaza from collapse.