As the Hamas-Fatah dispute over the chairmanship of Al-Aqsa University continues, the Education Ministry is threatening to revoke the school's accreditation. 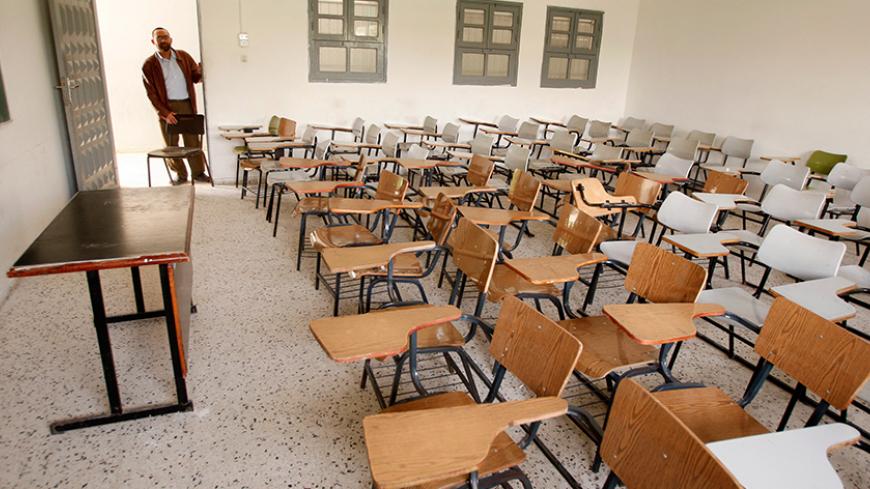 An empty classroom is shown at Al-Aqsa University in Gaza, April 15, 2008. - REUTERS/Mohammed Salem

GAZA CITY, Gaza Strip — The Fatah-Hamas dispute over the chairmanship of Al-Aqsa University has raised major concerns among students. In a statement issued Sept 7, the Education Ministry threatened to revoke the university’s accreditation if the board of trustees does not agree on appointing a consensus chairman within a week of the issuance of the statement.

The situation escalated after the resignation of former chairman Ali Abu Zuhri in early August, when Hamas appointed Mohammed Radwan as acting chairman of the university without input from the ministry.

On Nov. 5, the ministry cut the salaries of 11 pro-Hamas academics, some of whom are members of the board of trustees. In response, the university's staff union called for a general strike Nov. 8 in protest.

Union head Fuad Ayad told Al-Monitor, “It is difficult to agree on a chairman of the university, which will be facing major problems and political bickering that will affect its students and staff. The Education Ministry halted all academic and administrative dealings with the university, such as offering new programs accreditations like the nursing program and the certification of the graduates’ diplomas.”

He added, “The ministry also seized the university’s funds [from student fees], which amounted to 5 million Jordanian dinars [$6.5 million] and were deposited in the Bank of Palestine in Gaza. This step came as a pressure card to find a university chairman agreed upon by all parties. I suggest the name of Abdul Salam Abu Zaida as chairman for a year, to resolve the crisis.”

Khaled Zaqout, a senior business management student at Al-Aqsa University, told Al-Monitor, “I don't really care who the chairman will be, I just want Fatah and Hamas to agree on a person. I will graduate soon, and it is going to be a disaster to obtain a degree that is not accredited by the Education Ministry.”

Marah al-Batta, a freshman Arabic-language studies student, told Al-Monitor, “Both parties are willing to take control over the university without taking into consideration its exalted educational mission. I'm afraid that the conflict will result in the university being unaccredited, which will prevent many high-school graduates — especially female students — from completing their university studies. The difficult economic situation is prompting the parents to deny education to their daughters, due to the high cost at other private universities.”

Abrar Jouda, a sophomore media and information student, expressed her fears to Al-Monitor, saying, “I want Fatah and Hamas to know that I don't care about their differences and personal problems. I don't really care who is wrong. As a student, I want to hold an accredited degree, and I don't want my future to be jeopardized by not completing my higher studies because of these differences.”

Hatem Badr, an Al-Aqsa graduate who majored in finance and administrative science, missed the opportunity to complete his higher education abroad. He explained to Al-Monitor, “I submitted my papers to the Education Ministry in Ramallah for certification, but they refused to confirm my university degree. The ministry replied that the rejection is due to political differences with the university. All certification procedures have been halted until all problems are resolved. I've lost a higher education grant, as I was not able to register it through the ministry’s website.”

Youssef Balawi, a senior Arabic and Islamic studies student, told Al-Monitor, “Although the future is unknown for university graduates in Gaza due to high unemployment rates, and although all employers require a university degree accredited by the Education Ministry, [Palestinian] factions continue their political bickering at the expense of the students, whose future is in jeopardy. The people are the only losers.”

In a statement published Sept. 12, Education Minister Sabri Saidam said, “The ministry’s decisions are final, and its message was clear. The laws and regulations shall be enforced, no proactive steps should be taken and the ministry must reserve its right to oversee and follow up on [education affairs].” Saidam was referring to Hamas’ noncompliance with the ministry’s decision to appoint Abu Zaida.

Manal Abu Hassan, a sophomore English-language studies student, told Al-Monitor, “The Palestinian factions are supposed to resolve their problems without considering students’ interests. Educational institutions should remain independent and subordinate to a single party, namely the Education Ministry. I hope that the crisis ends by agreeing on a university chairman. We cannot concentrate or study in such an uncertain climate, which threatens our future if the university loses its accreditation.”

This disparity has contributed to the increasing number of students enrolled at Al-Aqsa University in the past years, as the Gaza Strip's difficult financial situation has worsened.

The Education Ministry does not offer official statistics on the students registered in Gaza’s universities, but Al-Monitor was able to secure some information from some universities' registrars. For instance, for 2015, there are 19,200 students enrolled at the private Islamic University, 1,800 students at the University College of Science and Technology in Khan Yunis and 1,512 enrolled at the University College of Applied Sciences.

It seems that agreeing on a consensus chairman for Al-Aqsa University is no easy task, as a result of the deep political differences between Hamas and Fatah. Meanwhile, university students, academics and administrative staff are left in a state of constant anxiety.