Al-Aqsa University in the Gaza Strip is affected by the political tension between the Education Ministries of Gaza and the West Bank, with the latter threatening to invalidate the university’s degrees. 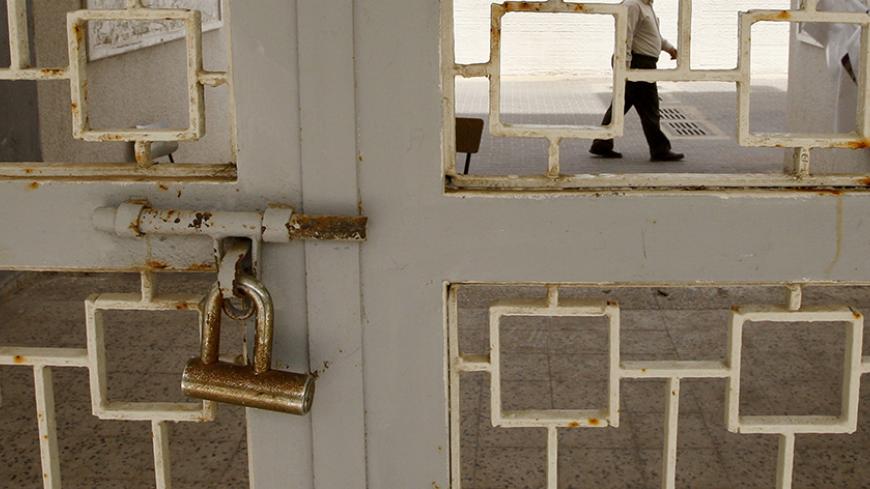 A Palestinian man walks past a closed gate at Al-Aqsa University in the Gaza Strip, April 15, 2008. - REUTERS/Mohammed Salem

GAZA CITY, Gaza Strip — On Aug. 9, the Ministry of Education and Higher Education in Ramallah announced its official withdrawal of accreditation from Al-Aqsa University in the Gaza Strip. The ministry issued a statement the following day appointing the current chairman of the board of trustees as chairman of the university.

This decision to invalidate new degrees sparked the concern of high school students from Gaza who want to enroll in the university and reflected the deep division that prevails between the Gaza and Ramallah ministries of education.

In August 2015, a crisis broke out at Al-Aqsa University when former chairman, Ali Abu Zuhri, resigned for unknown reasons after occupying his position for only four months. Khawla Shakhsheer, who was the minister of education and higher education in Ramallah at the time, tasked Abdul Salam Abu Zaida with handling the chairman’s responsibilities until a new chairman was appointed. Abu Zaida was the most senior serving employee at the university. This decision came in line with Article 17 of Law No. 4 of 2009 on the statute of public universities in Palestine, stating that the oldest serving person at the university shall handle the president’s tasks until a new president is appointed.

The ministry in Gaza did not approve of Abu Zaida’s appointment and tasked Mohammed Radwan, who was deputy president of Al-Aqsa University for Information Technology Affairs, to fulfill the chairman position. The Gaza ministry based its decision on the same law. However, according to the Gaza ministry, the law stipulates the appointment of the oldest serving deputy, not the oldest serving employee.

In its Aug. 9 statement, the Education Ministry in Ramallah asserted that the degrees of students currently enrolled at the university will not be accepted unless they are personally signed by the chairman of the university’s board of trustees that the Ramallah ministry appoints. This is knowing that the current statute enforced at Al-Aqsa University only requires the signature of the university’s chairman — or the acting chairman.

Radwan said, “The students’ fate cannot be toyed with in the media. It should be handled in official, certified documents, and the ministry should commit to its statements if it wants to implement them at the university.”

In a parallel development, the Ministry of Education in Ramallah also announced on July 16 free education for the 2016-17 academic year for students already enrolled at Al-Aqsa University in Gaza. Commenting on the news, Radwan said that the aim behind this decision is to spark political tension to pressure the ministry in Gaza to cave in to the decisions of its counterpart in Ramallah.

He said, “Due to the lack of employment of academics, the number of staff decreased, and the ministry in Gaza moved some of its employees [around 44] to the university after holding tests and interviews. The Ramallah ministry, however, has yet to recognize those employees.”

Ziad Thabit, the undersecretary of the Ministry of Education and Higher Education in Gaza, called on students not to waste the opportunity of enrolling in Al-Aqsa University, the only public university in the Gaza Strip, as it is the most affordable and offers the highest number of scholarships, saying the university’s accreditation cannot be withdrawn. As per the Law on Higher Education No. 11 of 1998, removing the accreditation of higher education institutions is prohibited unless the university violates the conditions based on which it was granted its license or if the president decides so.

About the university crisis, Thabit told Al-Monitor that his ministry had agreed with its counterpart in Ramallah in March 2015 on some provisions to end the dispute. These provisions included resuming the payment of salaries of university employees. Their salaries have been frozen since the Palestinian split. Also, as per said provisions, Al-Aqsa University’s financial and administrative situations would be taken care of.

Thabit considered the Ramallah ministry’s statement a way to impede the educational path at the university and tighten the noose on the Gaza Strip. He asserted that the ministry in Ramallah warned employees and members of the board of trustees against cooperating with Radwan.

Thabit noted that the number of new students who registered for the 2016-17 academic year is much less than in previous years, but registration is still open until the start of the academic year, Sept. 3.

Anwar Zakariya, the deputy undersecretary of Higher Education Affairs at the Ministry of Education in Ramallah, told Al-Monitor, “The ministry’s stubbornness in Gaza has caused the Al-Aqsa University crisis, and they must respond to the ministry’s demands in Ramallah.” He noted that appointing an acting chairman is illegal as long as the minister of education issued a decision to appoint someone else for the position.

Zakariya warned new students against enrolling in Al-Aqsa University and told them to register in other faculties and universities in the Gaza Strip. He asserted that the education minister in Ramallah has the right to withdraw the accreditation of the university according to Article 17 of Law No. 11 of 1998 that stipulates the cancellation of licenses for educational institutions by a substantiated decision by the minister, in case said institution does not meet the conditions set to get a license.

Zakariya denied that the decision to exempt current students from fees resulted from political tensions. He asserted that the decision was issued in consideration of the economic situation of Gazans, on the one hand, and the Gaza ministry’s incompliance with sending the university’s financial allocations to the state treasury.

“We will not offer credits for academic programs. If Gaza does not respond to our demands, no solution will materialize,” he said.

In light of the political dispute between Fatah and Hamas and with each movement trying to impose its control over Al-Aqsa University, the fate of the students remains unknown for now. The Ministry of Education in Ramallah keeps issuing statements that the ministry in Gaza rejects, as both parties claim to be working according to the law for the sake of students, who find themselves victims of this bickering.