The ministries of education in Gaza and the West Bank reached an agreement to end the standoff at Al-Aqsa University over administrative appointments, which had put the education of thousands of students in jeopardy. 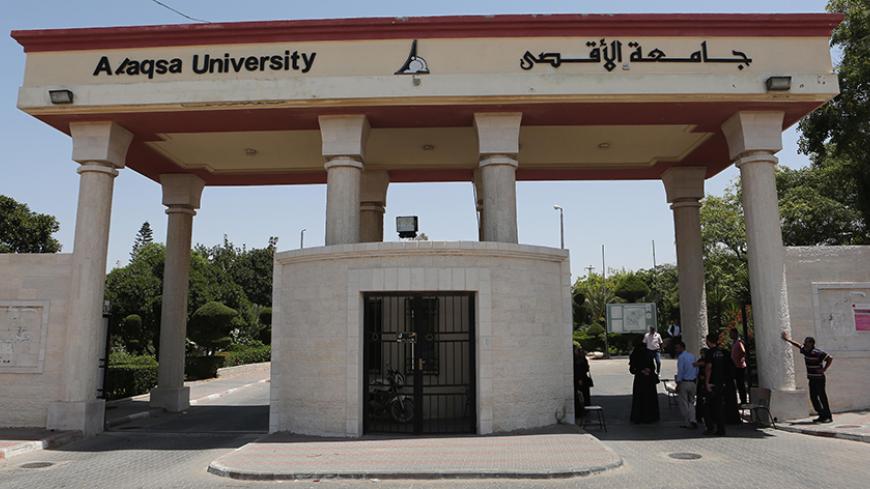 GAZA CITY, Gaza Strip — After months of deliberations between Gaza- and Ramallah-run education ministries, an agreement was reached March 29 ending the crisis at Al-Aqsa University in the Gaza Strip — the largest public university in the Palestinian territories. The crisis lasted for a year and a half and threatened the future of 1,000 employees and more than 27,000 students.

The crisis broke out in September 2015 when the Hamas-run Ministry of Education and Higher Education appointed Mohammed Radwan — without consulting the Ramallah-based Ministry of Education and Higher Education — as acting president of the university. This occurred after former chairman Ali Abu Zuhri submitted his resignation. The ministry in Ramallah resisted this appointment and threatened to withdraw its accreditation of the university if its counterpart in Gaza did not take back its decision to appoint Radwan.

On Nov. 30, 2015, the ministry in Ramallah dismissed the administrative measures adopted by its counterpart in Gaza for Al-Aqsa University, considering them to be a violation of Article 17 of the 1998 Law of Education and Higher Education that states, “Any license for an educational institution granted through a decision from the minister is canceled if the said institution fails to meet one of the licensing conditions and to settle its situation within six months at least from having received a written notification of the above.”

The ministry in Gaza refused to rescind Radwan’s appointment, thus prompting the consensus government to freeze the salaries of 13 academic and administrative staff at the university on Nov. 3, 2015, because they were connected to Radwan and disobeyed the orders of the Education Ministry in Ramallah. In response, the Education Ministry in Gaza expelled four deans from the university board because they abided by the decision of the ministry in Ramallah and did not attend the board of trustees’ sessions in the Gaza Strip.

The disputes peaked and spilled over to students. The ministry in Ramallah exempted students from tuition on Jan. 30, which was not to the liking of its counterpart in Gaza. The latter believed the decision was made to set off a financial crisis at the university, which pays its operational expenses with student tuition.

Radwan told Al-Monitor that the agreement that was reached March 29 is final and irreversible. He noted that it includes 13 provisions related to the disputed issues between the two ministries.

He added that the most important of these provisions was the appointment of the chairman of the board of trustees, Kamal al-Sharafi, as president of the university, and preserving the rights of its staff, mainly those hired following the Hamas-Fatah 2007 rift. The provisions also called for releasing university money frozen by the Education Ministry in Ramallah.

Radwan, who now returns to just being a member of the university's board of trustees, said the two ministries agreed on forming specialized committees to examine some administrative issues — such as forming the board of trustees through consensus — that remain pending between them, and also agreed to distance the university from any political brawls and to protect the rights of students to get their degrees certified by the university.

A source from the Education Ministry in Ramallah told Al-Monitor on condition of anonymity that Sharafi, who was appointed by Education Minister Sabri Saidam, assumed his position March 30 as head of the university, in the framework of the agreement reached with the Education Ministry in Gaza. He said Saidam will arrive in Gaza this week to formally announce the agreement. However, Palestine Now reported April 2 that Saidam apologized for not being able to make it to the Gaza Strip for unknown reasons, while saying the agreement still will come into effect eventually as agreed upon by both parties.

The source said one of the terms of the agreement stipulates the formation of an administrative committee for university employees appointed by the Education Ministry in Gaza; the university has been run by around 230 Hamas employees in recent years. The reasoning and legality behind the appointments will be examined and the committee will determine who is eligible to continue to work there.

The source stressed that the university’s frozen funds, which amount to 7 million Jordanian dinars ($9.8 million), will be unfrozen after the minister announces the agreement later at the university.

Al-Monitor tried to contact several officials from the Education Ministry in Gaza, but they refused to comment on the topic.

For their part, students expressed their satisfaction with the agreement that ended the crisis at their university. Monzer Mohammad, 19, told Al-Monitor, “The agreement made me reconsider the decision I had taken to transfer to another university in Gaza. After seeing thousands of students struggle over the past couple of years because their degrees were not certified due to the disputes between Gaza and Ramallah, it got me to seriously think about transferring to another recognized university.”

Mohammad added, “It is really shameful for the internal political division to affect educational institutions, which were the only institutions left that could unite us.” He called on the minister of education to visit the university to verify the implementation of the agreement and reassure students that the crisis will end.

Meanwhile, student Yasmine Jadallah, 21, told Al-Monitor, “Can you imagine that in a year I would have graduated from university without a certified degree from either MoEHE [Ministry of Education and Higher Education] because of the political disagreements between Gaza and the West Bank?”

She added, “But the agreement reassured me and thousands of students like me that the years we spent in our university will not be in vain.”

The parties to the agreement hope that no differences will arise during the relevant committees’ examination of the staff members appointed by the Education Ministry in Gaza, which could break the agreement and take things back to square one if many are denied employment.