As Iraq's education system continues to decline, the government is working to stop private universities from operating without accreditation. 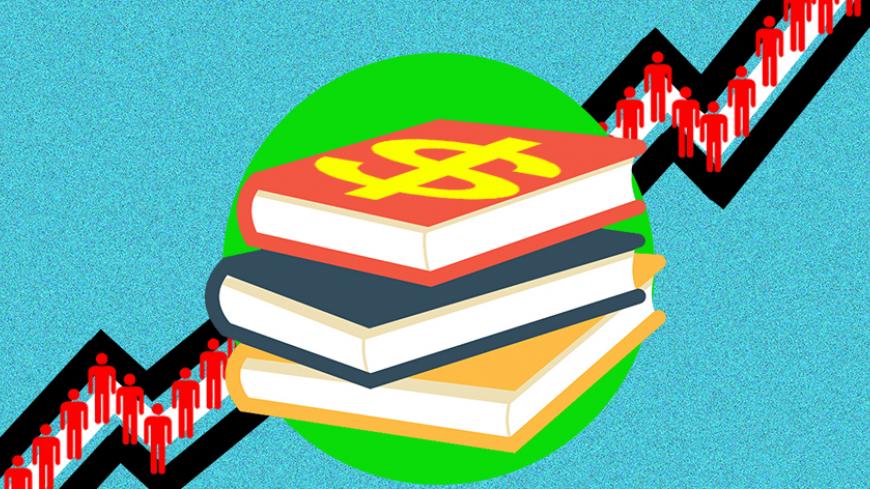 The failure of the Iraqi government to accredit universities has been called a factor in the country's rising unemployment rate. - Hugo Goodridge/Al Monitor

BAGHDAD — It's said that some college degrees aren't worth the paper they're printed on. Some graduates in Iraq are finding that to be true. Others can't even get the paper.

Dozens of students protested March 8 in front of the private Mazaya College, calling on the Ministry of Higher Education and Scientific Research to accredit their university and issue diplomas.

Mohammed al-Ghazi, who graduated two years ago from the college in southeastern Iraq, said the school still refuses to grant him and others their degrees, instead saying the ministry is reviewing them.

“I spent millions of dinars [1 million dinars equals about $860] at Mazaya College to obtain a degree in computer engineering. After I completed my fourth year, I found out that the college wasn't accredited and its degree is worthless on the market,” Ghazi told Al-Monitor.

After the protests, the ministry decided March 14 that it will develop a special test for Mazaya graduates and that if they pass it, they will be considered qualified in their field of study and receive a certificate from the ministry. The ministry hasn't yet started the process, which it expects to be complicated and lengthy.

In December, Iraq and five other Arab countries were removed from the World Economic Forum (WEF) global education quality index because their schools don't meet basic education standards. The other countries are Syria, Yemen, Libya, Sudan and Somalia.

After 2003, when the Iraq war began, many international and foreign universities stopped recognizing Iraqi university degrees because their standards couldn't be verified. Iraqis are asked to take proficiency tests before being admitted to some universities abroad. In the United States, each institution develops its own standards and requirements; many use credential verification services.

Haider al-Aboudi, a spokesman for the Ministry of Higher Education and Scientific Research, told Al-Monitor that private education first started in Iraq in 1988. Today, Iraq has 52 private universities and 35 state universities.

"Private universities or colleges are established by presenting an application by the investor to the Minister of Higher of Education, who in turn submits it to the Cabinet. Afterward, the registration procedures are carried out based on the market need for specialized colleges,” he said.

“The conditions for establishing a university include meeting financial, human resources and scientific requirements, in addition to a campus of at least 7,500 square meters [1.9 acres], with departments of no less 2,500 square meters,” he added.

“The Ministry of Education formed a committee to consider the problems of students who were admitted to unaccredited universities, and decided that they should undergo proficiency tests." Students who were accepted without the necessary backgrounds, such as literature students accepted into the medical program, will be disqualified. The review will affect about 3,000 students, he added. “The ministry is striving to strengthen academic standards in private education so that they meet international standards."

The ministry issued a statement March 13 confirming there are 15 unaccredited colleges and institutes in Iraq. The ministry called for shutting them down and warned students against applying to them in the coming academic year. If the institutions do not gain accreditation, they will be considered illegal.

Iraq's education quality has significantly declined since the 1990s as a result of wars and sanctions. Corruption also is a problem: Students with low GPAs who are not admitted to state universities and institutes often apply to private universities with lower standards, but admission to both private and government universities can be obtained through bribes.

Furat Jamal, a University of Baghdad teacher, told Al-Monitor, “Students with low GPAs apply to private universities, where they get accepted. The chaos plaguing the private education sector is caused by powerful politicians who establish [departments] to bolster their [visibility and] political activities, with no regard for the country’s reputation and academic standards.”

He added, "Some private universities were established as Islamic universities specialized in Islamic Sharia and teachings but soon opened academic departments, which is against the law. Education in Iraq has been going downhill because of the lack of supervision by the authorities and lack of good decisions in favor of the educational institutions.”

“The private education sector has caused many problems in Iraq, including the low level of education and increased unemployment due to random establishment of colleges without a feasibility study. … Many private universities have deceived students and admitted them without being accredited, and now their [students'] future is uncertain, even though they have spent millions of dinars on their education," Education Committee recorder Abir al-Hussein told Al-Monitor.

She added, “The executive and legislative parties are currently seeking to strengthen the education system so it is recognized internationally, after having suffered a setback in recent years.”

According to the United Nations Educational, Scientific and Cultural Organization's website, "During [the] 1980s, the Iraqi education system was recognized as one of the most developed systems in the Arab states."

In addition to corruption and political manipulation, the system also suffers from governmental neglect. For 2017, the government has allocated only $1.9 billion to the education sector; last year that figure was $2.1 billion. No private university programs are recognized internationally. The concerned parties thus will be required to shut down the worst programs and form partnerships and exchange programs with foreign universities. They will also have to properly equip the universities and urge students and teachers alike to publish academic research papers in international journals.