Iraqi university graduates are finding it increasingly difficult to get jobs because unrecognized universities are essentially selling advanced degrees. 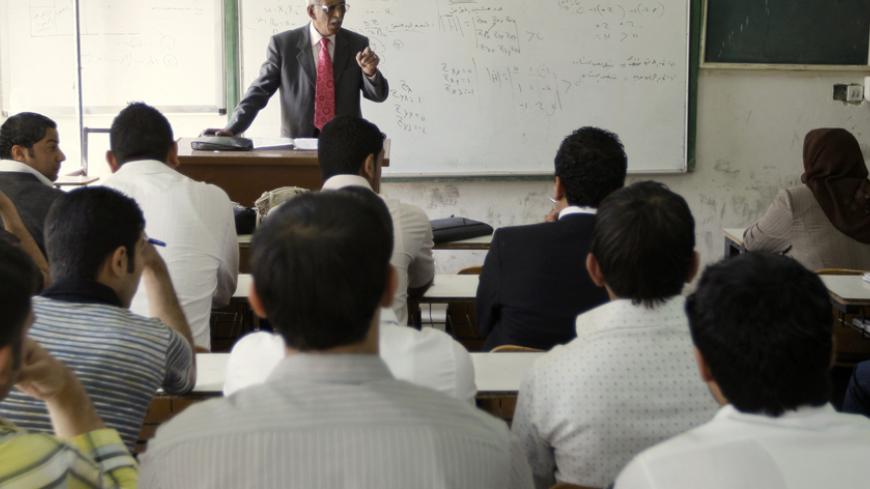 A professor gives a lecture to students at the College of Administration and Economy in Baghdad University, March 16, 2009. - REUTERS/Thaier al-Sudani

BABIL — Meager employment opportunities have led Iraqi university graduates holding doctoral and master's degrees to despair, as they pursue fruitless searches for jobs in government ministries and the private sector. In Babil province Feb. 3, some 200 unemployed university graduates attended a seminar in Murdoch Hall in Babil’s tourist resort. Also in attendance were the parliamentarian Haitham al-Jubouri as well as representatives from the Ministry of Higher Education and civil society organizations. The seminar included discussions about how to improve employment opportunities in Iraq.

Shabib al-Midhati, who has a master's degree in the plastic arts, told Al-Monitor at the seminar, “After my trip to the Ministry of Culture and Higher Education where I was looking for a job, I felt that it won’t be easy [to find work] especially in light of the financial crisis the country is going through.” Mohammed Alaa, who hails from Baghdad and is a graduate of the Academy of Fine Arts at the University of Baghdad, told Al-Monitor, “Such meetings no longer work, as they mostly lead to promises that will not be kept. These are promises made for political campaigns only.” He stated, “The scarce opportunities are first and foremost given to the relatives and acquaintances of politicians and officials.”

On the sidelines of the seminar, Saad Hassan, who has a master's in education, said that bribery “is the nearest road to appointment” and admitted that he had “paid around $3,000 to a broker in order to get a teaching job.”

Iraqis with bachelor's and postgraduate degrees as well as graduates of institutes are actively organizing protests to compel the government to create job opportunities. Dozens of unemployed graduates demonstrated Feb. 3 in front of the provincial council building in Najaf, carrying banners demanding employment. Meanwhile, unemployed graduates have created pages on social networking sites to draw attention to their cause and stay in touch with each other. On Facebook some established what they call “a national campaign to demand the appointment of senior certificate holders in Iraq” to pressure government agencies to provide job opportunities.

An investigative report published by Al-Ittihad at the end of 2014 said that the number of unemployed university graduates with doctoral and master's degrees amounts to about 4,000, while the statistics of the Ministry of Labor and Social Affairs in 2014 indicated that there are more than 142,000 educated unemployed, 65% of whom have diplomas, bachelor’s degrees and graduate certificates. Meanwhile, this month the parliamentary Committee on Education announced that the country needs more than 3,000 postgraduates.

The politician and academic Hani Ashour told Al-Monitor, “Influential parties are sponsoring the distribution of graduate degrees.” He also said, “Illegal academic certificates are being replaced with official certificates.” Ashour explained, “Some higher certificates are awarded by unrecognized universities, which impedes the academic advancement of the country. Moreover, people with forged certificates are now occupying the ranks of scholars.” According to Ashour, “Iraq is now in the ranks of academically underdeveloped countries.”

Laith Shubbar, an academic adviser in the office of the president, told Al-Monitor, “The large number of universities in Iraq has made higher education available to those who wish to have higher degrees, but this must be subject to professional and academic conditions.” In addition, he said, “The university should take into account the needs of the community in terms of the competencies needed by the country, while the government should offer job opportunities in all fields and in various sectors.” Shubbar contended, “Government employment is in fact disguised unemployment.”

The journalist Walid al-Tai, who writes about youth affairs for Iraqi newspapers, told Al-Monitor, “The policy of establishing many universities and facilitating the process of receiving graduate degrees caused a decline in interest in education and training institutes from which middle management staff had graduated.” He explained, “A lot of people are now seeking scientific and academic titles for sheer social prestige.”

The author Rafed Mahdawi stressed in an interview, “Many of these graduates [with doctorates and master's] are resorting to nepotism and corruption to guarantee these degrees and get a job.” Shatha Askar Najaf, an author and academic, appeared to agree, telling Al-Monitor, “In many cases, certificates are being awarded in Iraq in exchange for money.” Najaf further said, “A lot of university graduates lack competence, their target being to gain social prestige and increase their salaries.”

Najaf’s statement is in line with those of Sabah Mohsen Kazim, a researcher in community affairs who told Al-Monitor that through his relationships with universities by virtue of his work, he discovered that higher degrees are being sold to and bought by the wealthy and the sons of dignitaries and officials.

Ahmed Obaid, coordinator of student affairs at the Biology Faculty at the University of Karbala accused local universities of “accepting students with weak academic credentials and giving them a higher degree in exchange for money.” The Ministry of Higher Education and Scientific Research has threatened these unrecognized universities with prosecution if they continue to open departments and accept students.

The number of universities registered with the Ministry of Higher Education and Scientific Research has reached 36, while the number of officially licensed community colleges stands at 43. For the 2013-2014 academic year, the number of freshmen in higher education exceeded 554,000, with the number of graduate students at 30,000. Some charge that education policy is making universities focus on quantity rather than quality. As a result, large numbers of students are graduating, but many of them with higher degrees lack the scientific and academic proficiency needed for the global economic and social advancement of Iraq.