Gaza university students and graduates are calling on the Ramallah government to restore the accreditation of their schools while a committee sounds the alarm about soaring unemployment rates. 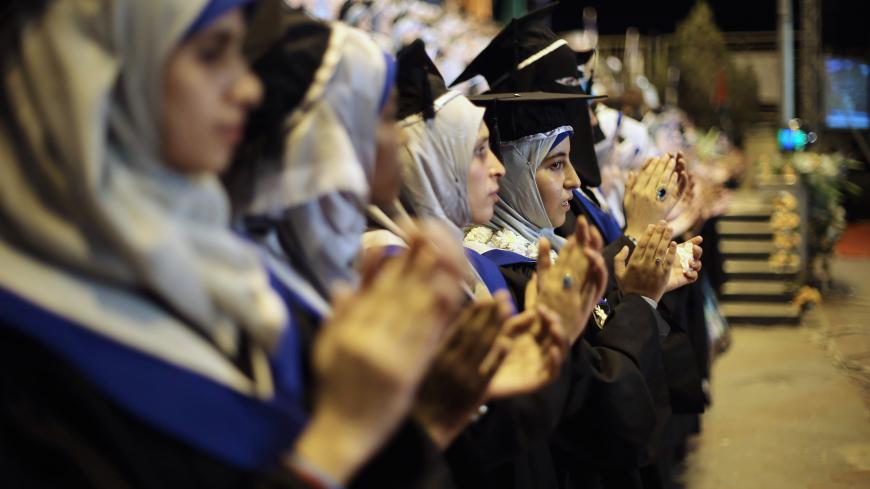 GAZA CITY, Gaza Strip — A number of university graduates protested in front of the Ministry of Labor in Gaza Feb. 18, preventing Labor Minister Mamoun Abu Shahla from entering the building. They were demanding solutions to the unemployment crisis.

On Jan. 28, unemployed university graduates formed a committee to promote their rights to employment in the public sector. Committee spokesman Shadi al-Naqla told Al-Monitor that the ongoing Palestinian division and failure to achieve true reconciliation, in addition to the Israeli blockade, are making the already poor economic situation even worse. Naqla added, “We are not seeking temporary employment opportunities. We are demanding radical solutions to this problem, such as supporting small projects, financing for projects and permanent jobs in vital sectors.”

On Jan. 22, Al Mezan Center for Human Rights published a study on unemployment in Gaza. The study indicated that political changes in the Gaza Strip contributed to increasing unemployment rates, which hit a staggering 46.6% in 2017, exceeding 60% among the youth, according to the Palestinian Central Bureau of Statistics. There are 220,200 unemployed Gazans based on the International Labor Organization’s definition of unemployed.

The study noted that the number of graduates from higher education institutions for the 2016/2017 school year in the provinces of the Gaza Strip amounted to 21,508; 11,601 of them are men and 9,907 women. Currently enrolled students number 85,660.

Director General of Employment and Policy in Gaza Majid Ismail told Al-Monitor, “The student movement is making legitimate demands because graduates have a right to work. Currently, the Labor Ministry of the consensus government is working to find a solution to this issue through obtaining international and Arab funding for the Youth Protection Employment Fund, the Youth Social Security Act and the temporary employment program that was suspended two years ago.”

The Ministry of Labor’s temporary employment program gives university graduates the opportunity work in the public sector for three months with a monthly salary of 1,000 shekels ($288) for graduates with a bachelor's degree and 900 shekels ($259) for those with a high school diploma. The program, which was scaled down drastically two years ago, has employed 186,573 graduates between 2007 and 2017, currently placing workers only on projects funded by international nongovernmental organizations. Over the last 10 years, more than a quarter of a million university graduates, some of them with masters and doctoral degrees, applied for the program.

Al Mezan’s study warned of the devastating effects of the high unemployment rate in the Gaza Strip, including serious social problems such as poverty, extremism and other crime.

Unemployment is not the only problem facing thousands of young people in Gaza. Around 25,000 students and university graduates hold uncertified degrees, disqualifying them to enter the labor market because the Ministry of Education with the government of consensus refused to recognize the accreditation of their universities under the former Hamas government in Gaza.

On Jan. 24, the Gaza Student Movement launched an online campaign to draw attention to the accreditation issue. Many students, alumni and activists voiced solidarity online using #OurFutureFallsApart to draw attention to this crisis, calling for a solution. The movement represents thousands of graduates and students of the eight affected universities and colleges in the Gaza Strip.

Aya Aslim, the head of the student movement, told Al-Monitor, “After four months of working on this movement, we stepped up our activities with multiple protests in January to demand an immediate solution to the crisis. The issue threatens the future of 25,000 students and graduates of eight schools.”

“Our main demand is to have our university degrees certified so that we can look for job opportunities and fulfill our professional and educational future,” Aslim noted.

Ayman al-Yazuri, the assistant undersecretary of higher education at the Ministry of Education in Gaza, told Al-Monitor, “The ministry in Gaza cannot certify the degrees of those who graduated from colleges and universities that have yet to be accredited by the consensus government.” He added, “These educational institutions are to blame since they need to conform to the standards set by the Accreditation and Quality Assurance Commission,” which is affiliated with the Ministry of Education of the consensus government but was not active in Gaza during the division.

But the president of Al-Ummah University College, Rafat al-Hor, said the Gaza schools are doing all they can and praised their efforts to regain accreditation and solve the crisis.