The American University of Iraq in Sulaimaniyah brings together Iraq’s various religious and ethnic groups, providing education away from the country's sectarian divide. 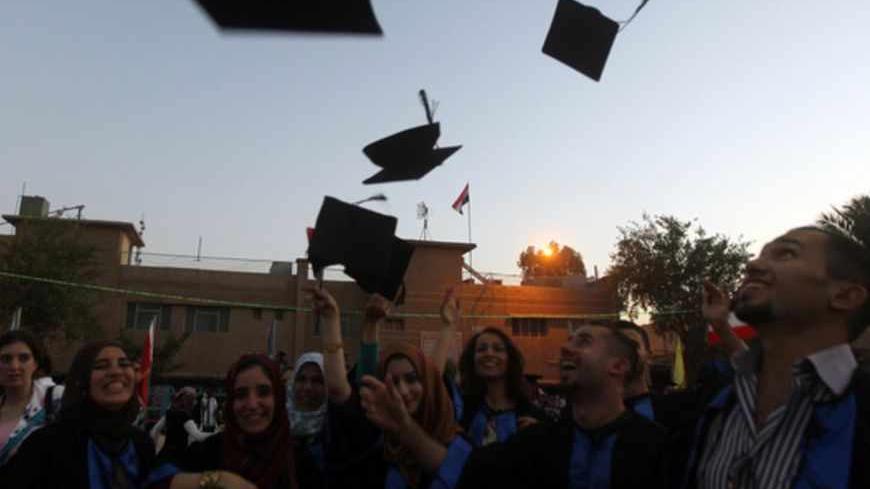 Iraqi students throw their hats during their graduation ceremony at the Technical University of Baghdad on June 30, 2012. - AHMAD AL-RUBAYE/AFP/GettyImages

Zaydan Khalaf, a Yazidi student, didn’t feel he was different from any other student as he was completing his two-year master's degree at the American University of Iraq in Sulaimaniyah (AUIS).

Khalaf formed friendships with Iraqi students of different nationalist affiliations and ethnic groups, as well as with students from abroad. He was never harassed for having a different religion, creed or nationality.

The AUIS Board of Trustees held a meeting in Sulaimaniyah in 2006 to create an American-style educational institution in Iraq. They wanted to establish a university in which gifted students from across Iraq and the region could study, regardless of their affiliations.

The university opened its doors in 2007, and 45 students from various regions were accepted in the first phase, during which the university launched a master's program in business administration.

AUIS is recognized by the Ministry of Higher Education and Scientific Research in the Iraqi Kurdistan Region and certified at the national level in the US by the American Academy for Liberal Education.

Zaydan Khodida, who finished his master's degree in business administration, told Al-Monitor, "During the two years that I spent in university, I did not notice any difference at the religious, ethnic or even nationalistic level. There were students from across Iraq — from the center and the south, from Kurdistan and abroad — Shiites, Sunnis and other ethnic groups. As for us, the Yazidi students, we were 22."

He added, “I currently have friends from Baghdad, Basra and all of Iraq’s cities, and I am always in contact with them. These friendships were formed during university days.”

Followers of the Yazidi religion in Iraq were subjected to many attacks after 2003, and many Yazidi students were forced to leave Iraqi universities after they were harassed by terrorist groups that believe that Yazidis are not Muslim and that they should therefore be killed.

Khodida said there are more opportunities to get a job in the Kurdistan Region or other provinces of Iraq when students have a degree from AUIS. He added that students who graduate from AUIS speak English well, in addition to Kurdish for ​Kurdish students and Arabic for Arab students. Foreign companies always look for efficient people, he added, and this is what the university produces.

Concerning the process by which students are accepted at the university, Bazar Ali Boscani, an AUIS spokesperson, told Al-Monitor that all Iraqi students are eligible to apply to AUIS — be they residents or nonresidents. They are, however, subject to the terms of the Ministry of Higher Education and Scientific Research in the Iraqi Kurdistan Region, whereby minimum grades of 70% average in the scientific and literary sections are required. Non-Iraqi students must get an equivalent to their diplomas from the Iraqi Kurdistan government’s Ministry of Education.

Boscani pointed out that there are more than 1,000 students enrolled in the university, not including those who are working toward a master's degree and those enrolled in courses organized by the university to improve their English. This year saw the graduation of the university’s second class.

Boscani also noted that students come from Kurdistan, Iran, Kuwait and Syria, adding, “We consider this to be a good start, and we hope that the number of these students will increase in the future.”

He also said that the higher a student’s GPA in high school, the lower the tuition fees, and added that this is a form of support and encouragement provided by the university for students in the preparatory stage. This is done in order to push them to make greater efforts to obtain higher degrees when they graduate from high school.

Boscani added that if a student’s GPA when he or she graduates from high school is between 95% and 100%, tuition is $1,500. As for students with an average of 75%, they pay $6,500 annually, but that amount decreases when their GPA increases.

Concerning the number of colleges, he said, “At first, we had three colleges for business administration, international studies and information technology.”

“This year,” he added, “we opened two colleges for general engineering and mechanical engineering, and two others for the English language — one for English literature and another for languages and journalism.”

According to Boscani, AUIS graduates easily find good job opportunities, except for those who go on to finish their graduate studies in Europe and the United States. Boscani noted, “We currently have students completing their post-graduate studies in American and European universities, but about 98% of our university graduates get jobs.”

He added, “We have a career center at the university that helps students find job opportunities before graduation and there is a great demand for graduates of our universities, because they are following a new educational system.” He added that AUIS is filling the void in the fields of administration and informatics, and they graduate with excellent English skills.