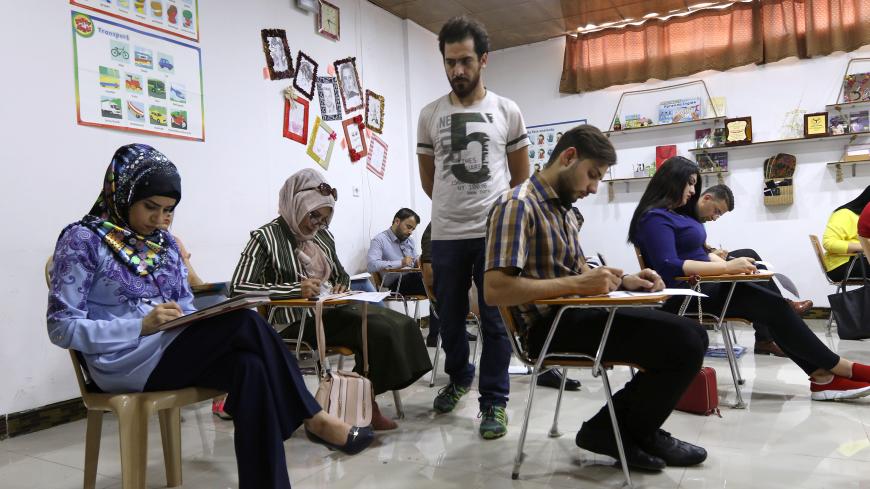 BAGHDAD — There are no easy options for Iraqi graduates who want to continue their education with post-graduate studies. If they have good grades, they may try to obtain one of the few free spots at a public university in the country. If their grades are not good enough to take that path, they could try to find a private university in Iraq to attend or opt to study abroad, which could be cheaper. Given this situation, a growing number of post-graduate students are choosing to leave Iraq, bound for neighboring countries or India, where numerous post-graduate programs are taught in English.

“I am studying English literature at the Osmania University in the Indian city of Hyderabad, which is recognized by the Iraqi Ministry of Higher Education and Scientific Research,” Maytham Abdel Rizk, a master’s degree student who left Iraq in 2016, told Al-Monitor. “I chose India because they speak English there, and it is easy to communicate with people. I study there at my own expense. The annual tuition fee at Osmania University is $1,000, and the university has a good ranking, and it is organized, unlike most universities in Iraq.”

Abdel Rizk further noted, “India has thousands of Iraqi master's and PhD students. The number used to be even higher, but their number decreased after the Iraqi Ministry of Higher Education decided to stop recognizing the diploma of some Indian universities.”

In 2011, Iraq published a list of universities abroad whose diplomas it would recognize. Universities considered but not included on the list were pegged as suffering from poor academics.

Ali Hamdan al-Saadi has chosen to pursue a master's in mathematics at Ferdowsi University, in Mashhad, Iran. The relatively low fees attracted him. Even at Iran's renowned University of Tabriz, yearly fees toward a master's degree only cost $1,000, while that for doctoral studies is $1,500. This is a small amount compared to the cost of private Iraqi universities, where the minimum fee is about $5,000 a year.

“Admission is almost free in Iranian universities,” Saadi told Al-Monitor. “Universities admit students with average scores on the condition that they learn Persian. The tuition fees range from $600 to $2,000 per year, and Iraq recognizes the certificates of many Iranian public and private universities.”

Saifuddin Ezz, who chose to pursue post-graduate studies at Turkey’s Middle East Technical University (METU), said studies for a master’s degree in architectural engineering costs him $1,200 per year and that a four-year PhD program costs $2,400 per year. Classes are taught in English at METU, but all Turkish universities require students to pass a Turkish course. “The required Turkish-language course is $800,” Ezz said. “University annual tuition fees vary from one university to another, but do not exceed $4,500 a year.”

In the case of Turkey, Iraq's list of acceptable universities only includes public institutions. Ezz remarked that he had tried for four years to study for a post-graduate degree in Iraq, but he could not get into a university because his grades were not high enough.

Higher education has been one of the casualties of Iraq's long years of war, with several public campuses and university facilities destroyed, and many universities only now getting on their feet. This means that there is limited space for post-graduate studies. The other option is going to private universities, but there are few post-graduate programs and those are expensive.

In the face of growing demand for placement, the Ministry of Higher Education and Scientific Research has been trying to increase the number of seats available. On Aug. 28, the ministry announced that it would begin accepting applications from universities to create new post-graduate programs at private universities so that as many people as possible can study, given the large number of applicants at public universities. This would allow private universities to offer more post-graduate studies for the year 2019-2020 and theoretically beyond.

Some students of course opt for universities in Iraq whose diplomas are not recognized by the ministry. These students hope that their university's diploma will someday be recognized by Iraq or that they will later be able to continue their education abroad at a university that accepts it.

“The total number of post-graduate students in Iraq was 10,000 until 2016,” Haidar al-Abboudi, head of the Information Office at the Ministry of Higher Education and Scientific Research, told Al-Monitor. “The ministry decided in 2017 to increase admissions, and this number jumped to 14,000 admitted students.”

Abboudi also pointed out that the ministry has put conditions on those who want to study abroad with government scholarships. In such cases, Abboudi said, “The [required] GPA [grade point average] varies according to the major, but the minimum average must be 80%.”

Since 2003, an increasing number of students have been applying to study abroad at their own expense, creating a niche for companies assisting with submitting proper and complete admissions applications. Abboudi said that the ministry does not have official stats on the number of Iraqi students abroad, as many of them do not have a file at the ministry. Most of them enroll in universities through unlicensed offices.

Salah al-Fatlawi, director general of the Department of Scholarships at the ministry, told Al-Monitor that students who complete their studies outside Iraq still need the ministry to recognize their diplomas and certificates, otherwise they are mere paper. “They would be wasting their time and money otherwise,” Fatlawi said.

Obtaining a diploma, including one that is officially recognized, far from guarantees employment. According to the Ministry of Labor and Social Affairs, around 1,200 higher education graduates were unemployed in 2017. That number doubled in 2018.