The increase in the number of private universities in Iran has not increased the level and quality of scholarly work in Iran. 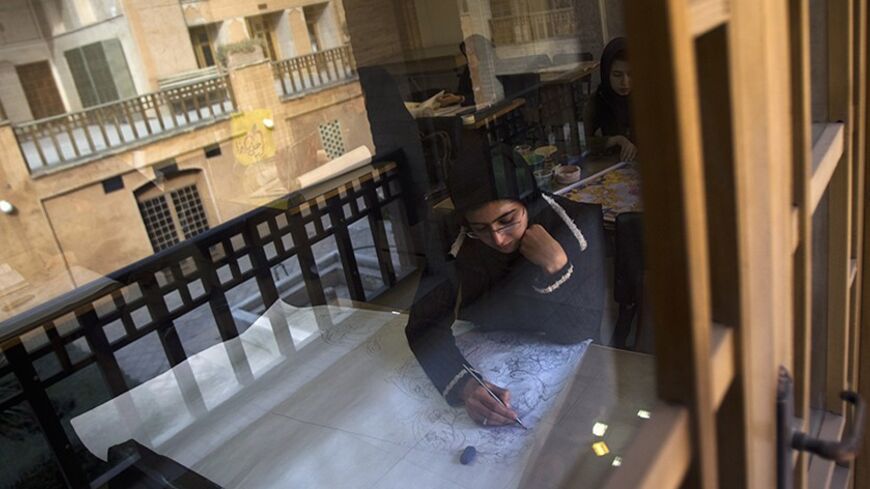 A student draws a pattern for a Persian handmade carpet as she sits in a classroom at Esfahan Art University, 450 km (280 miles) south of Tehran, Nov. 14, 2011. - REUTERS/Morteza Nikoubazl

TEHRAN, Iran — The Iranian president, Hassan Rouhani, had a meeting with university chancellors and heads of research and educational institutions. During this meeting, Rouhani emphasized that the quality and the quantity of education should be compatible with one another in Iranian academia. He also said that although he is proud of the increasing expansion of the post-graduate programs and the number of Ph.D. students in the country, he cannot help but worry about the quality of the education that they are receiving.

Since the early years of the Islamic revolution, there has been an attempt to expand and propagate higher education in Iran. In 1982, then-speaker of the parliament Ayatollah Hashemi Rafsanjani had unveiled plans for establishing a new university called Azad (Free) University with branches in all parts of the county, including villages.

In 1988, Payame Noor University was founded. Payame Noor offered distant learning and half-time education. In its early years, it mostly enrolled government employees and professionals. Eventually, however, it opened its doors to other types of students and also, for the first time, enrolled undergraduate students without asking them to take the university entrance examination.

In the following years, an increase in the number of private universities and centers for higher education made higher education much more accessible to students in Iran. In Rouhani’s words, the government managed to almost completely eradicate students’ fear of the undergraduate entrance exam.

Easier access to undergraduate education resulted in students becoming interested in postgraduate education, such as master’s and Ph.D. programs, in hope of finding better jobs and social status. It has gone so far that Rouhani, in a rather critical tone, said: “I will be very happy to hear that we have 40,000 Ph.D. students in Iran. However, let’s look at the famous universities in the world and see how many Ph.D. students each of them have.”

The truth is that the rate of knowledge production in Iran, in case of humanities and social sciences as well as natural sciences, is not compatible with the increase in the number of universities. According to the experts, humanities and social sciences are in a sorry state in Iran. Rouhani believes that political “red lines” that prevent both the students and faculties from expressing their opinions candidly are the reason behind this problem.

Natural sciences are not in a significantly better condition either. There has been a notable rise in the number of Institute for Scientific Education (ISI) articles written by Iranians and Iran currently ranks as No. 18 in the world. However, judging by the number of references made to these articles, it appears that none of them have been deemed useful.

According to the journal Nature, in 2012, among the 39 countries which were actively involved in submission and citation of articles, Iran ranked lower than countries such as Saudi Arabia, Singapore, Egypt and Turkey.

Based on the regulations of the Ministry of Higher Education, many Iranian professors and students are required to produce and publish scientific and research articles. Prior to the new regulations, master’s degree students’ dissertations were graded not to 20 (total allotted points on the Iranian grading system) but to 18; up to two more possible points were allocated based on the students' research and scientific articles.

Also, a notable portion of the credits that each student needs to be accepted into a Ph.D. program comes from the student’s science and research articles. Therefore, Iranian science and research journals have resorted to charging a fee for publishing articles written by students and professors.

As the result, students and professors publish articles with the aim of receiving credit and not because they believe that the society has any need for what they are publishing. Rouhani also addressed this issue and criticized it by saying that producing articles, without caring whether or not they are useful for society, is pointless.

The desire to produce content under any circumstances to receive points and credit in the academic environment has resulted in numerous institutions offering to help the students, and professors, by writing their articles and dissertations for them. In some cases, these organizations even arrange for articles to be published in science and research journals. Therefore, a large number of dissertations and research articles are not written by students and professors in the university but are instead produced by a trading firm.

Of course, articles and dissertations are not the only things that can be bought. Many universities and centers for higher education enroll students who have not taken entrance exams if they are willing to pay a certain amount of money. It appears, based on the number of advertisements put forth by these types of universities, that higher education has become a money-making business in Iran.

Although Azad University does have an entrance exam, it is constantly trying to increase its own capacity so it can enroll more students and earn more profit. Last year, the head of the Islamic Azad University Center for Entrance Examination announced that the enrollment capacity for master’s degrees has increased by 31%.

Buying and selling academic articles and dissertations, enrolling students without the entrance exam and in exchange for money, and the universities' drifting away from industry and the everyday needs of society all indicate that the growth in the quantity of the universities has been in exchange for a decrease in their quality. It appears that in Iran, higher education and publishing articles have become a matter of gaining prestige and earning credits.