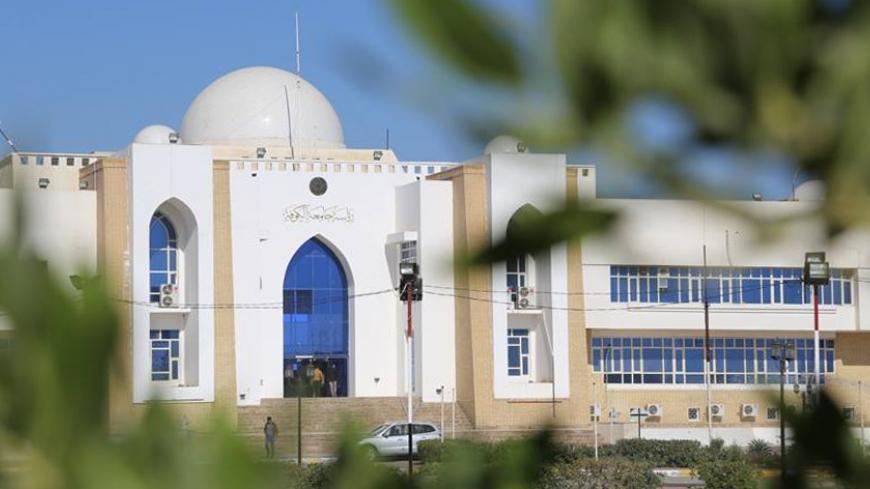 The University of Kufa, recently ranked at No. 701 in the QS World University Rankings, Kufa, Iraq, Sept. 29, 2014. - Facebook/@University.of.Kufa

BAGHDAD — The University of Kufa declared on its website Sept. 6 that it ranked 701st among the world’s best universities, according to QS World University Rankings. This is great news for the reputation of the country's universities, since most Iraqi universities are not included in any global university rankings. Nevertheless, this achievement does not mean that Iraqi universities have overcome their problems, mainly the demand of students for an improvement in the education system. The student protests in Kufa that took place March 10 subsequently spread to the north and south of the country.

On Feb. 25, students from the University of Muthanna in Samawah, al-Muthanna province, banned then-Minister of Higher Education Hussein al-Shahristani from entering the campus, as they believed he had failed to improve tertiary education and provide essential academic facilities to Iraqi universities. On Aug. 30, university students in Sulaimaniyah, Iraqi Kurdistan, boycotted classes because of the lack of financial grants for students.

The education sector in Iraq has been dealt several blows; for instance, the University of Kirkuk has witnessed national and sectarian strife, which caused its Shiite Turkmen dean to resign on May 4, 2015, after the Kurds expressed objections against him.

In this regard, Nader Abdullah, a professor at the University of Babylon, told Al-Monitor that the student protests are the natural results of the ongoing crises in the country. He said, "They reflect the dire conditions of the higher education sector; the high ranking of the University of Kufa was at a scientific research level only. Iraq’s universities lag behind the universities of the world because of low-level management and centralized decisions, which affects the knowledge product and weakens the university's’ participation in the building of society. This is not to mention the declining academic and scientific level of the graduates.”

Abdullah also stressed the “interference of partisan and sectarian agendas in the policies of the universities, at the expense of professional and scientific standards.”

For his part, Abdul Razzaq al-Issa, the minister of higher education and scientific research, also recognizes this dilemma in Iraq’s educational sector. He told Al-Monitor, “The partisan electoral agendas affect the policies of the universities and I will not be part of it.”

In further evidence of these statements, an academic from the University of Babylon, who spoke on condition of anonymity for fear of jeopardizing his position, told Al-Monitor, “[Universities] are highly partisan, which affects the issuing of diplomas, positions in colleges and institutions, and the students’ admission in prestigious colleges.”

He added, “Many of the university theses promote partisan and sectarian agendas and are not even remotely associated with professionalism and scientific standards."

This alarming trend was already present in the era of the Baath regime (1968-2003), when university theses were geared to serving the goals of the political regime and a ticket to securing high-ranking positions.

Khazaal al-Majidi, an academic researcher on the history of civilizations and religions, shares the same opinion on this issue. Speaking to Al-Monitor, he traced back the history of the “deterioration of higher education in Iraq." He said, "Iraqi universities started to go downhill gradually in the mid-1970s, when the Arabization of engineering and medicine materials took shape in universities, and campuses turned into battlefields of the Baath Party and its opponents. Party members had also managed to fully control some faculties."

Things have not changed much since the fall of the Baath regime, as students continue to be admitted to colleges and granted diplomas and other distinctions based on their partisan affiliations, away from any professional standards or guidelines.

This is what happened, for instance, at the University of Kirkuk, which awarded students on July 2 five additional points as a result of the difficult conditions experienced by the students and the growing ease of obtaining forged certificates. This led numerous Iraqis — even the elderly — to rush to obtain higher education. They were not seeking education as such, but rather a university degree, even if through twisted and illegal ways, as a means to secure a job, including senior officials who had forged their educational degrees to keep their prestigious office.

This situation has led to a substantial inflation in the number of graduates who obtained a university degree, but remain unemployed.

Professor Ahmed Abed who teaches at the University of Al-Qadisiyah, told Al-Monitor, “We must develop mechanisms that promote confidence in university education. The new Higher Education Law consolidates the role of universities in development and reconstruction and the investment of theoretical research in applied fields."

Mohammed al-Shammari, a member of the Commission of Higher Education and Scientific Research, told Al-Monitor, “Universities are in urgent need of independence in terms of admission policies and preparation of the curriculum, which must be scientific, away from any political, sectarian or nationalist ideology.”