Palestinian university students who fled the violence in Syria are facing many difficulties in the Gaza Strip, as the authorities have backtracked on promises to exempt them from fees. 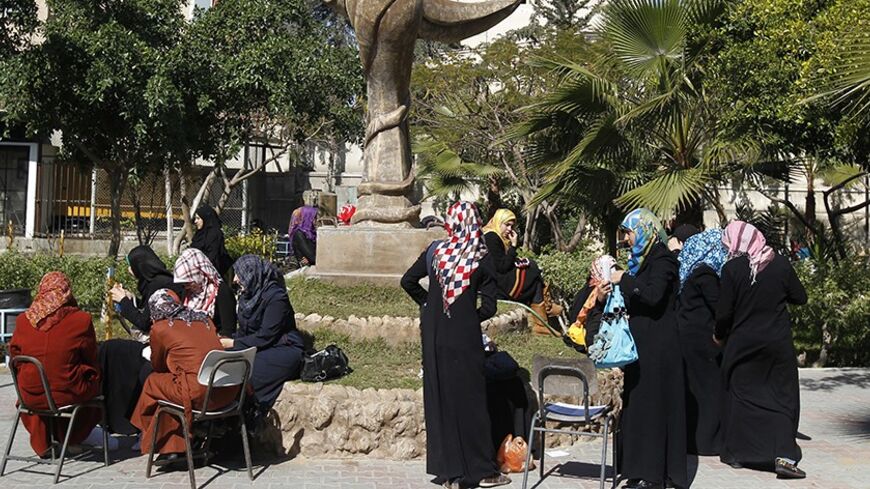 Palestinian university students who recently escaped the cycle of violence in Syria and fled to the Gaza Strip are facing many difficulties meeting their educational needs in Gaza. Meanwhile, their families are suffering from a number of problems stemming from the lack of job opportunities and sources of income for their basic needs.

Although Prime Minister Ismail Haniyeh promised that these students would be offered grants and fee exemptions to complete their studies, these promises have yet to be fulfilled. Consequently, many students had to drop out of college due to the high fees.

According to Atef al-Amawi, the chair of the follow-up committee for the refugees coming from Syria, about 270 Palestinian families have fled the camps in Syria and come to the Gaza Strip. Among the refugees’ children are 40 students seeking to complete their university education at the Palestinian universities in Gaza.

“Unfortunately, the government has not fulfilled its duties to guarantee an education for our refugee children,” Amawi wistfully told Al-Monitor.

The government’s failure to fulfill its educational commitments to these students pushed Anas Abu Ajina, a Palestinian refugee and student from Syria, to cancel his enrollment at Al-Azhar University when he was no longer able to pay the fees.

“As Palestinians, we used to receive education in Syrian universities at no cost. We are facing huge obstacles today, although we are in our home country,” Abu Ajina told Al-Monitor. He noted, “When we resorted to Gaza, the government offered us temporary jobs for 800 shekels [$230] per month. After two working months, we still hadn’t received any money because of the financial crisis. We finally got the salary for only one month, three months later.”

Abu Ajina also confirmed that this tough situation has made him and other students drop out of school.

“Although my family and I ran away from death and murder in Syria to Gaza, I cannot afford commuting to university, especially since studying costs a lot of money,” said Abdullah Abu Laban, a Palestinian from Syria who is studying business management at the Islamic University of Gaza.

On Nov. 17, 2013, during a meeting with refugees returning to Gaza from Syria, the head of the Gaza government, Ismail Haniyeh, announced a series of decisions to ease their suffering. Among those decisions is to exempt the refugee children from tuition and to provide grants for students attending universities.

On that, Issam al-Daelis, Haniyeh’s economic adviser, said, “During the meeting, Haniyeh promised the refugees free education only for primary and secondary schools.”

Daelis explained during his interview with Al-Monitor that “Haniyeh promised to ask the Palestinian universities to accommodate these students, stressing that government efforts are now underway to completely cover the cost of tuition for all students who fled Syria to Gaza.”

But Abu Laban responded by saying, “When we met with Haniyeh during that meeting, he promised to provide us with college grants. Based on that, we registered in the universities in Gaza. But so far, those promises were not kept.” He added that university education is a right that he should enjoy in his homeland.

Abu Laban added that student refugees from Syria have faced difficulties during their university enrollment, including being forced to shift to Gaza’s academic system without any consideration of their unique circumstances. As a result, “some students who had completed two or three years of university studies in Syria had to start from scratch in universities in Gaza,” Abu Laban noted.

Rami Mohsen, a spokesman for the national campaign to reduce tuition fees in the Gaza Strip, told Al-Monitor that Palestinian student refugees from Syria to Gaza are not being treated as they should be. He said, “It seems that our Palestinian universities in Gaza have not been active in assuming their national role of accommodating these students. This has stopped them from completing their education and prevented them from having access to their most basic rights in their homeland.”

Amawi conveyed the same demands to the government and universities in Gaza, and noted that the Islamic University of Gaza and Al-Azhar University, the two largest in the Gaza Strip, explained that they are unable to exempt these students from paying tuition as a result of the financial crisis.

The Islamic University of Gaza apologized for not being able to meet these demands in a written statement signed by its public relations director Raed Saleha last September.

The university explained in the statement: “Given the stifling blockade on the Gaza Strip, the bad economic situation — from which most segments of society have suffered — the significant rise in the number of needy students at the university and the accumulated university budget deficit, I am sorry to inform you that our current financial circumstances do not allow us to add any new group to the list of tuition exemptions and financial aid. Yet, these students can apply for student loans and fellowships with the dean of the Student Affairs department.”

Amawi considered this a strange response to the students’ demands, since these refugees have nothing, having left behind their property, money and jobs in Syria’s camps.

As this report was finalized, there was news of a serious government attempt to resolve the crisis and grant refugee students from Syria their educational rights. But, said Mohsen, “We will continue our struggle until [our goals become reality] and until the students get their full rights.”