The Palestinian Authority has been plagued by a protracted financial crisis amid thinning foreign aid and not enough local revenues to end the deficit. 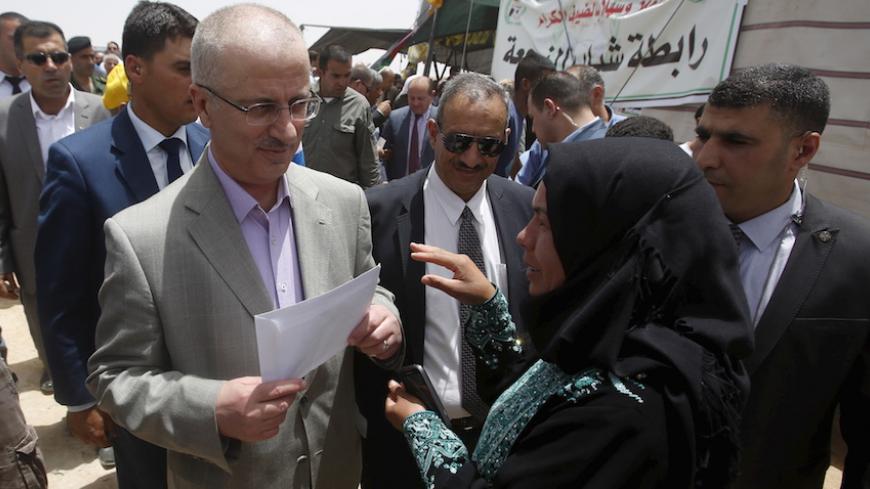 GAZA CITY, Gaza Strip — Foreign aid and grants to the Palestinian government have dropped by 45% so far this year, according to Palestinian Prime Minister Rami Hamdallah, raising questions about the reasons for this significant drop, the extent to which the Palestinian Authority is affected (as it depends on these grants as a major source of funds) and how successful the measures taken by the PA to meet this challenge are.

Hamdallah revealed the figures in his speech Aug. 27 at the second Social Accountability Forum in Ramallah.

According to the quarterly statistical bulletin issued by the Palestinian Monetary Authority in June, foreign aid and grants provided to the PA reached about $1.23 billion during 2014, while wages and salaries amounted to about $1.9 billion, and the total debt at the end of 2014 reached almost $2.22 billion.

Samir Abu Mudallala, an economics professor at Al-Azhar University in the Gaza Strip, told Al-Monitor, “Since its establishment in 1993, the PA has been receiving foreign financial aid and grants, reaching to this date about $18 billion. The biggest financial grant to the PA so far was in 2008 of around $1.8 billion all at once. However, after 2011, foreign aid started to drop.”

He attributed the decline to several reasons, the most important of which is the setback of the peace process with Israel. He pointed out that the grants are substantially linked to how compatible the authority's positions are with donor countries' visions regarding the peace process.

Other reasons for diminished support, he said, include the global financial crisis plaguing the European Union and the needs of other beneficiaries receiving financial support, such as Libya, Syria and Lebanon.

Abu Mudallala explained that donor countries pledged $5.4 billion to the PA during the Cairo International Conference for the Reconstruction of Gaza in 2014, but the PA has received only 30% of that amount so far.

A high-level source in the Ministry of Finance in Ramallah concurs with Abu Mudallala that these grants are linked to the progress of the peace process between the PA and Israel.

The source, who requested anonymity, told Al-Monitor, “The US, the biggest donor to the PA, cut back its financial aid in 2011 to $51.7 million, compared with $450 million to $600 million yearly prior to 2011. There was no aid in 2012 following the failure of the peaceful settlement path. However, in 2013, with the launch of new peace negotiations, the US allocated $349 million to the PA’s budget and in the same year the World Bank provided it with around $1.374 billion worth of aid.”

He explained that the PA has been trying hard, for three years, to achieve financial sustainability and reliance on local revenues in order to have an independent political position that is not undermined by grants, and to address the continuing general financial deficit standing at 5.865 billion shekels ($1.5 billion) in 2014.

Yet, the same source believes the PA is still suffering an intractable problem that has been posing a major challenge. Israel is still withholding clearance revenues collected on behalf of the PA. This caused a severe financial crisis that prevented the PA from paying the salaries of 156,000 military and civil servants in the Palestinian territories, such as what happened in January when Israel froze revenues until the end of March. The source pointed out that the clearance revenues reached about $6.5 billion in 2014, representing 70% of the PA’s net public revenues.

It should be noted that the 2010 Kuwait Arab League Summit approved the financial safety net for the PA of $100 million a month, but the Arab countries did not fulfill their promises to the PA and no money was donated.

On another note, Mahmoud Abu al-Rab, dean of the faculty of economics and administrative sciences at An-Najah University in Nablus, said the decline of international aid and grants to the PA created a large gap between the PA’s financial revenues and its expenses, reaching a deficit of $600 million a month, which adversely affects the educational, health, progress-related, construction and developmental services in the Palestinian territories.

Abu al-Rab told Al-Monitor, “The policy of decreasing foreign financial grants to the PA led it to rely on local revenues, constituting only 40% of the PA’s annual budget.”

He added, “The decrease in foreign grants led to the delay in the disbursement of salaries of government employees, and negatively affected development and construction activities in the Palestinian territories. This led to a drop in domestic economic growth and cast its shadow on a number of key economic indicators, such as unemployment, poverty, income, production and local growth.”

In this context, the Ministry of Finance source talked about austerity measures taken by the PA to reduce the financial deficit caused by the drop in foreign grants, such as reducing the value of purchases and operating expenses within PA institutions.

However, he said, “The PA keeps deviating from its austerity schemes and increases spending and lending. The net lending value reached 955.8 million shekels ($245 million) in 2014 compared with only 600 million shekels ($153 million) allocated for lending in the same year.”

Abdel Sattar Qassem, a professor of political science at An-Najah University in Nablus, told Al-Monitor, “It is obvious that the PA does not have any plans to address the crisis involving the decrease in foreign grants since it has no strategies for self-reliance, an increase in domestic production or the reduction of imports.”

He believes the PA suffers rampant administrative and financial corruption, making it unable to progress and achieve self-reliance. He added, “The PA has corrupt fiscal policies, including continuing to disburse the salaries of 62,000 employees who stopped working following the Hamas takeover of Gaza in 2007. These employees do not provide any services to the Palestinian people and do not contribute to the process of development and economic growth.

Qassem called on the PA to address these wrong policies and procedures, and said, “The failure to address the negative administrative procedures and to implement sound local economic developmental programs will inevitably lead to a difficult financial crisis for the PA in the near future.”

Despite the PA's continued attempts to gain financial independence by relying on local revenues, its efforts are being crippled by the decline in foreign aid, leading to a persistent deficit. The setback is hampering the authority's societal development projects in the Palestinian territories.