Palestinian President Mahmoud Abbas' increasing pressure on Hamas in the Gaza Strip is widely seen as less about reconciliation and more as a step toward a regional settlement of the Palestinian-Israeli conflict. 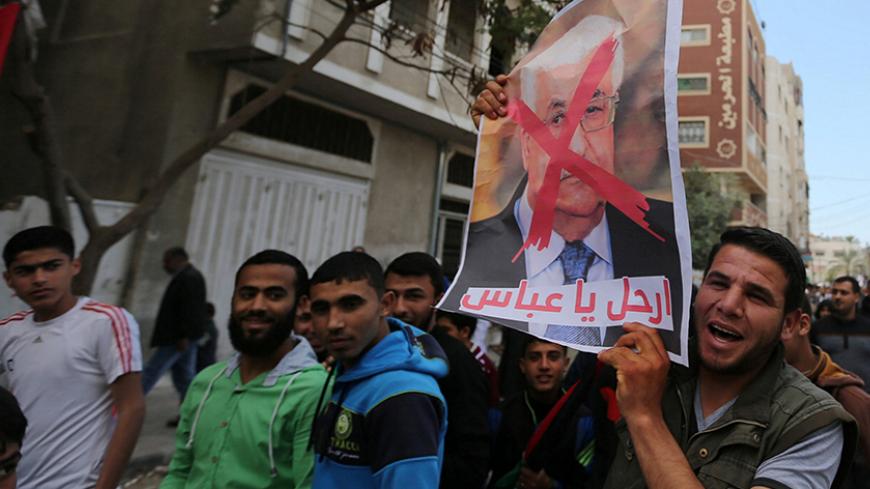 The Palestinian Authority (PA) and Hamas have been engaged in a tug of war for some time now. The dispute entered a new stage April 12, when President Mahmoud Abbas promised during a speech at a conference of Palestinian ambassadors in Bahrain to pressure Hamas to end the division.

During his visit to Washington May 4, Abbas vowed to take “painful and unprecedented” measures against Hamas, and they have been escalating by the day. Most recently on June 26, nine patients, three of them children, died in the Gaza Strip after being denied travel permits for treatment abroad.

The PA says its goal is to push Hamas to agree to Abbas' conditions for reconciliation. Dissolving the administrative committee it set up in March to run Gaza will allow the national consensus government to work in the Gaza Strip and agreeing to hold presidential and legislative elections within six months. However, Hamas believes the plan is consistent with Israel's plans for Gaza.

The PA’s measures began on April 4 with the government deducting 30-50% from the salaries of its employees in the Gaza Strip, followed by suspending social assistance to 630 families and preventing hundreds of cancer patients from accessing treatment in Jerusalem or Israeli hospitals. The PA stopped covering electricity payments to Israel on April 27. On April 28, Abbas approved the early retirement law, which will force an estimated 35,000 military personnel in Gaza to retire early. Most recently in June, the government also cut the financial support for 277 former Hamas prisoners in the Gaza Strip.

The early retirement law, like the other measures, led to an exchange of accusations between Hamas and the PA. Faraj al-Ghoul, the head of the Legislative Committee at the Palestinian Legislative Council in Gaza, said on June 14 that the forced early retirement procedures are “discriminatory and aim at tightening the noose on the Gaza Strip.” The PA denied the accusation in a June 19 press statement by Adnan al-Dumeiri, a spokesman for the security services, claiming that the decision is intended to restructure the security services.

Ahmad al-Majdalani, a close associate of Abbas, chairman of the Palestinian Pension Authority and member of the PLO's Executive Committee, reiterated the claim to Al-Monitor, saying, “Early retirement has nothing to do with the PA's actions against Hamas. Its goal is to restructure the security services.”

Majdalani added, “The measures to pressure Hamas will continue, because the Hamas government in Gaza has to assume full responsibility for the Gaza Strip and the PA cannot finance the coup and its government.”

An official PA source told Al-Monitor on condition of anonymity, “The measures that will be taken reflect the PA’s refusal to finance the government formed by Hamas. Such measures include stopping any purchases that benefit Gaza such as fuel, electricity and medicine, in addition to any tax exemptions or school and university expenses and so on.”

There has been growing discussion in the media about Abbas' possible intention to declare Gaza a rebel district as a last resort. However, Majdalani said, “This is completely untrue. This issue has not been discussed in any of the Palestinian decision-making circles at all.”

Meanwhile, Hamas is trying to minimize damage from the crisis by communicating with the Egyptian authorities and reaching understandings with dismissed Fatah leader Mohammed Dahlan, who has close ties with Egypt. Hamas is seeking solutions for Gaza’s problems by opening the Rafah crossing and turning to Egypt to ease the electricity crisis. After the PA informed Israel that it will no longer pay the electricity bill, Egypt sent about 1 million liters of diesel to Gaza on June 21, raising the number of hours of electricity provided to Gaza per day from between two and four to six.

The PA sees the rapprochement between Dahlan and Hamas as an effort to avoid reconciliation. Majdalani said, “This is a desperate attempt by the two parties, because they are in trouble and each party is trying to exploit the other's issues to improve its own conditions in the Gaza Strip. But our information indicates that the parties supporting Dahlan and Hamas will not allow this relationship to go forward.”

Speaking to Al-Monitor, Hamas leader Yahya Moussa attacked Abbas’ actions against Gaza, describing them as “crimes against humanity” committed to benefit Israel. Moussa defended the understandings between Hamas and Dahlan, saying, “When you live in crisis, you should consolidate all the Palestinian parties and unite them, and when President Abbas closes all avenues, the parties must unite to face the crisis together.”

The PA's moves against the Gaza Strip coincided with the US administration's efforts to relaunch the peace process. The timing raised doubt that the measures are the result of Arab and international pressure on the PA, led by US President Donald Trump, to achieve a regional settlement that would end the Palestinian-Israeli conflict.

Hamas-affiliated author Mustafa al-Sawwaf told Al-Monitor, “The PA’s actions are not to pressure Hamas, but rather to punish the people of Gaza for supporting the movement. The PA wants to pressure Gaza while it works on the regional peace plan, which aims to eliminate the resistance in Gaza and separate the Gaza Strip from the West Bank to settle the Palestinian cause.”

Fatah leader Yahya Rabah told Al-Monitor that an Arab alliance is being formed between Saudi Arabia, the United Arab Emirates and Egypt, and it is classifying the Muslim Brotherhood and Hamas as terrorist organizations, which is why the movement is required to reconsider its political positions. He said, “The PA is suggesting inviting Hamas to join the PLO and become part of the legitimate Palestinian movement to save it from the disaster that will soon strike the region.”

Rabah added, “The president's plan for reconciliation runs counter to the external pressures being exerted on him to consider Hamas a terrorist [group], and it paves the way for the movement to become legitimate."

It seems that in the coming period, the PA can be expected to impose more measures on Gaza to pressure Hamas, which is not likely to respond to any of them. Such steps will, however, limit the movement’s options: Hamas could either strengthen its cooperation with Egypt and Dahlan to ease the crisis, as it is currently doing, or engage in a new war with Israel. Some Israeli analysts have warned the government about the risk of war after cutting electricity to the Gaza Strip, saying a confrontation could erupt in light of the deteriorating living conditions of Palestinians in Gaza.