Is Abbas turning his back on Egypt?

Despite lukewarm relations between Palestine and Egypt, Palestinian President Mahmoud Abbas will not turn his back on Cairo. 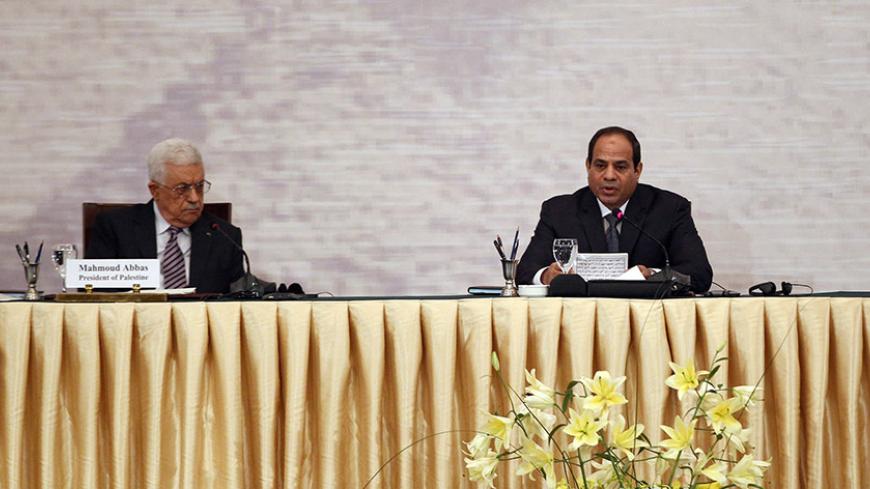 RAMALLAH, West Bank — Several developments over the past few months can explain the lukewarm bilateral relations between Palestine and Egypt. Palestinian President Mahmoud Abbas refused to defer to pressure from the Arab Quartet (Egypt, Jordan, the United Arab Emirates and Saudi Arabia) to achieve an internal reconciliation in Fatah that would have allowed for the return of those dismissed from the movement, most notably Mohammed Dahlan.

Abbas announced on several occasions his rejection of any interference in Palestinian affairs. In a speech at Fatah's seventh congress on Nov. 30, Abbas said, “We confirm our categorical rejection of any interference in our internal affairs and preserve our national and independent decision,” thus reaffirming statements he had made in September that "no one can dictate positions or decisions to us.”

“We make and implement our own decisions, and no one can exercise any power over us,” he added.

Abbas' statements were reportedly aimed at Egypt, given the latter’s close relationship with Dahlan. This prompted the Egyptian Youm7 newspaper to fiercely attack Abbas in September and even accuse him of “political dementia and dancing on the bodies of Palestinians.”

In light of the dispute between the Palestinian Authority (PA) and Egypt, Cairo seemed more open to Hamas and the Dahlan bloc, allowing Dahlan’s supporters to hold meetings on Egyptian territory. This support can also be seen in Egypt's more frequent openings of the Rafah land crossing with Gaza, most recently on Dec. 17 for three days, a week after it was opened Dec. 10. Add to this Cairo’s declaration of humanitarian support to the Gaza Strip.

This may have prompted Fatah to swiftly call on Hamas to attend its general congress in Ramallah to show its desire to achieve reconciliation with the movement. Also, after he returned from an October visit to Turkey, Abbas met with the head of Hamas’ political bureau, Khaled Meshaal, and his deputy, Ismail Haniyeh, in Qatar. They discussed internal Palestinian affairs, the need to resume the Qatar-hosted dialogue between Fatah and Hamas, and the need to achieve national reconciliation. Abbas thanked Qatar and Turkey in his speech at the November Fatah congress, raising the question as to whether Abbas has decided to turn his back on Egypt and reach out to Qatar and Turkey.

Mahmoud al-Habash, the adviser to Abbas, visited Cairo Nov. 8 and announced that the misunderstandings between Palestine and Egypt do not affect the strategies that bind the two countries. He told Al-Monitor that the PA's "relations with Egypt are fine, and there are no problems or disputes between the two countries. Diverging views are solved in a friendly way, and there is nothing to disturb the bilateral relations.”

Habash added, “There were different points of view between the two countries, but everything is now solved."

Despite Habash’s diplomatic response, a Palestinian source from Fatah told Al-Monitor on condition of anonymity that the relationship between Egypt and Palestine is lukewarm as a result of the PA rejecting the pressures exerted by Egypt. The source added that the PA does not want this dispute to turn into a rift with Egypt due to Egypt’s stature in the region and its pivotal role in several Palestinian issues.

Since Egypt is sponsoring the reconciliation between Fatah and Hamas, it has cards it can play to place pressure on the PA. Egypt could strengthen Dahlan’s position or even open a new page with Hamas, Fatah’s political opponent, by opening the Rafah crossing and establishing a free-trade zone with the Gaza Strip. The PA is well aware of Egypt's strong cards, which is why it does not want relations with Egypt to sour.

Ahmed al-Majdalani, a member of the PLO Executive Committee who is close to Abbas, told Al-Monitor, “We have gotten over the issue of the Arab pressure.”

Majdalani said, “Our relationship with Arab countries is based on coordination and cooperation, and we reject some Arab parties’ erroneous understanding of this cooperation and meddling in internal Palestinian affairs.”

He added, “Politically speaking, the relationship with Egypt is good. There is coordination and consultation between the two leaderships, and Egypt cannot risk to lose Palestine and its cause for one person [Dahlan]. This is out of the question.”

“This is not a matter of dispute with any Arab country,” he said.

Asaad Abdul Rahman, a member of the PLO Executive Committee, ruled out the possibility of the PA turning its back on Egypt and reaching out to Qatar and Turkey.

He told Al-Monitor, “When a certain country places pressure, it does not mean that we should reach out to another one in an opposite axis, because this could make things worse.”

Abdul Rahman said the PA usually deals with pressures by “explaining the Palestinian position rather than engaging in a game of Arab and regional axes, because Palestine must be at the same distance from all the Arab countries.”

Ahmad Jamil Azem, a professor of political science at Birzeit University, told Al-Monitor, “President Abbas cannot afford a tense relationship with Egypt and a special relationship with Qatar and Turkey. The president will not enter into an adventure of this kind.”

Azem added, “I don't think that Egypt would allow the relationship with the PA to degenerate, especially considering that the impression that Dahlan gave to Egypt and the Arab states, whereby he is of considerable stature in the Palestinian street, has faded during Fatah’s seventh congress, which was successfully completed without the Dahlan issue being tackled. The matter was deemed over.”

Finally, the PA’s blocked horizons in the reconciliation process and its internal divisions make it in dire need of support from Arab countries, especially Egypt, given its stature for Palestine and its sponsorship of several Palestinian issues. Abbas is incapable of turning his back on Egypt despite all the Egyptian pressure he is facing.