Recent statements by Israeli Prime Minister Benjamin Netanyahu are feeding suspicions between Hamas and Fatah and widening the divisions between the West Bank and the Gaza Strip. 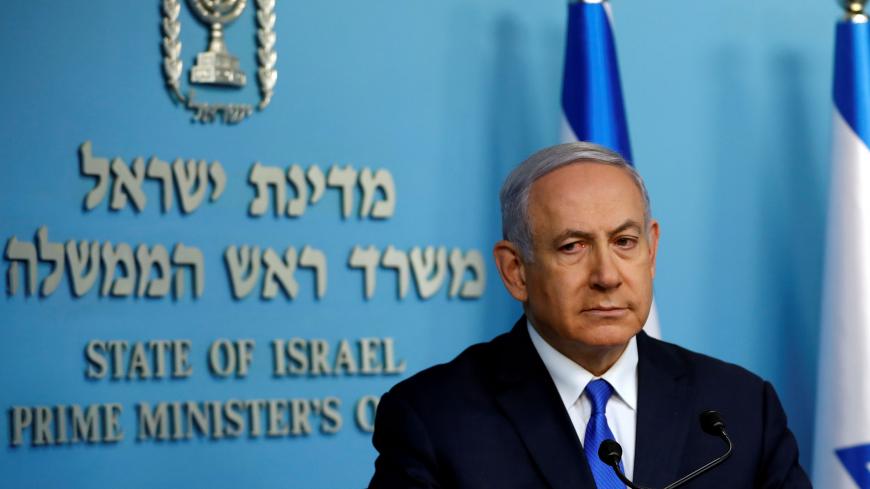 Rival Palestinian factions Fatah and Hamas are exchanging accusations following unprecedented statements by Israeli Prime Minister Benjamin Netanyahu in which he rejected the idea of the Palestinian Authority (PA) reclaiming control over the Gaza Strip — because Israel is benefiting from the Palestinian division. He also said Israel will not give Gaza to PA President Mahmoud Abbas.

In an April 4 interview with Israel Hayom newspaper, Netanyahu stressed that the Gaza Strip and the West Bank have become separate entities, and that this is not particularly a bad thing for Israel. He said, “[Abbas] brought that upon himself. He cut back the influx of PA funds [to Gaza]. He thought that by doing so, he could send Gaza up in flames. We would [have to] pay for the occupation of Gaza with a heavy loss of life, and on Israel’s back, [Abbas] would get Gaza on a silver platter."

"That won’t happen,” he added.

Palestinians reacted soon after Netanyahu's statements. On April 7, Azzam al-Ahmad, a member of Fatah’s Central Committee, accused Netanyahu of seeking to maintain Hamas' authority while worsening tension between Gaza and the West Bank.

Ahmed Majdalani, a member of the PLO Executive Committee, told Donia al-Watan website April 6 that instead of shifting the Palestinian situation from division to outright separation, Hamas ought to respond to Netanyahu by ending the division and implementing the reconciliation agreement reached with Fatah in October 2017.

Also on April 6, Mahmoud al-Habash, supreme judge of Palestine and Abbas' adviser on religious affairs, told Palestinian news network Raya that Netanyahu's statements prove that the Hamas leadership — which seized control of Gaza in 2007 — is working for him by insisting on division and not putting Gaza back under the all-inclusive Palestinian umbrella. According to Habash, this means Hamas is plotting against the Palestinian cause.

Palestinian presidency spokesman Nabil Abu Rudeineh told Wafa news April 4 that Netanyahu's remarks make it imperative for Hamas to realize what is being planned for it as part of the US plan for Middle East peace, which is still a matter of some secrecy.

However, Hamas has consistently rejected the deal, most recently when Hamas spokesman Hazem Qassem issued a press statement April 6 stressing that Hamas will not be part of the plan.

Hamas spokesman Fawzi Barhoum told the Saudi-funded satellite TV channel Al-Resalah on April 7 that Abbas' behavior is consistent with Netanyahu's statements, which bolsters the chances of the West Bank and Gaza separating further from each other and paves the way for the US plan to be implemented. He asserted that Hamas is all that's standing between Abbas and his goal.

In turn, Ahmed Yousef, a former political adviser to Hamas leader Ismail Haniyeh, told Al-Najah news website April 6 that Hamas stresses that there will not be a Palestinian state in the Gaza Strip nor will there be a state without Gaza — hinting at the unification of Gaza and the West Bank.

Mustafa al-Sawaf, former editor of Felesteen newspaper in Gaza, told Al-Monitor, “The PA does not mind returning to Gaza on the back of an Israeli tank, but Netanyahu's statements addressed the international community to show that he will not reoccupy the Gaza Strip and is against the PA's desire to control it. However, he is for keeping the division and is taking advantage of the Palestinian conflicts between Fatah and Hamas.”

Meanwhile, Israeli media has been increasingly talking about allegations that the PA and Arab states are involved in an Israeli effort to overthrow Hamas. Yet, on April 4, Netanyahu told Israeli Public Broadcasting Corp.'s website Makan that no Arab leader is ready enough to manage Gaza should Israel regain control over it.

Israeli journalist Yair Sheleg wrote in Makor Rishon on March 31 that the long-term solution in Gaza can only be achieved through Israeli and international engagement with Arab states (which he did not name) that are preparing to solve the Gaza problem. "This means an international action to resettle Gazan refugees outside the Gaza Strip — in the northern Sinai Peninsula, in all the Arab states and perhaps in other countries," he wrote.

Gen. Kobi Michael, former head of the Palestinian desk at the Israeli Ministry for Strategic Affairs, wrote in a March 31 analysis for the Institute for National Security Studies that Israel could face a problem finding anyone it would want to fill the vacuum in Gaza if Hamas falls from power.

Mahmoud Mardawi, a member of Hamas’ national relations bureau, told Al-Monitor, “Netanyahu's statements confirm that Abbas' policies are wrong and that he is going to separate Gaza from the West Bank. Netanyahu's vision is consistent with his army's intention not to carry out a broad war against Hamas. I don't believe he will change this policy, although not all Israelis — especially those who support using force against Hamas — agree with him on it.”

Hamas may be reassured that Israel is not going to eliminate it, especially not to give Gaza back to the PA. Israel is not ready to sacrifice its soldiers for Abbas, particularly since Hamas and Israel agreed on Egyptian-brokered humanitarian understandings March 30 in Gaza.

Wasel Abu Youssef, a PLO Executive Committee member, told Al-Monitor, “Netanyahu's statements seek to deepen the Palestinian division and even take it a step further toward separation. They happen to coincide with Hamas' understandings with Israel, in preparation for making [the understandings] long-term, as the [US peace plan unveiling] approaches.”

Abu Youssef added, “The PA never asked Israel to wage a war against Gaza. Netanyahu's speech is misleading and no Arab state will dare take control of Gaza and overstep the Palestinian legitimacy.”

It's highly unlikely that Israel, which withdrew from Gaza in 2005, would return to it in 2019, especially without a clear military plan capable of overthrowing Hamas and ensuring security in the Gaza Strip. If there is no such plan, Israel will not risk a return, because it doesn't rely on anyone else to ensure its security, be it the PA or any Arab country.

Maj. Gen. Wasef Erekat, a Palestinian military expert in the West Bank and a former PLO artillery commander, told Al-Monitor, “Netanyahu is not going to wage a war against Hamas in Gaza, fearing for the lives of his soldiers. He may, however, carry out a deterrent military operation against Hamas without overthrowing it.”

Erekat said, “Israel is interested in keeping Hamas in control of Gaza, and [keeping] the PA in the West Bank. The division bodes well for its strategic interest. Israel may be reluctant to eliminate Hamas, given the rapprochement between the movement and Egypt, which will not welcome such a move for fear of security chaos spilling over from Gaza to Sinai.”

Netanyahu's statements embarrassed both Hamas and Fatah. He showed keenness to keep Hamas in control of Gaza and portrayed Fatah as begging him to wage a war against the Gaza Strip to overthrow Hamas. Netanyahu's comments also increased tension between Hamas and Fatah and raised questions about each of them being part of Israeli plans to deepen Palestinian division.