Will Israel, Turkey decide the fate of Gaza?

Reports on a possible Israeli-Turkish agreement on the construction of a floating harbor off the Gaza Strip and that would be served from Turkish Cyprus rekindled internal Palestinian wrangling between Fatah and Hamas. 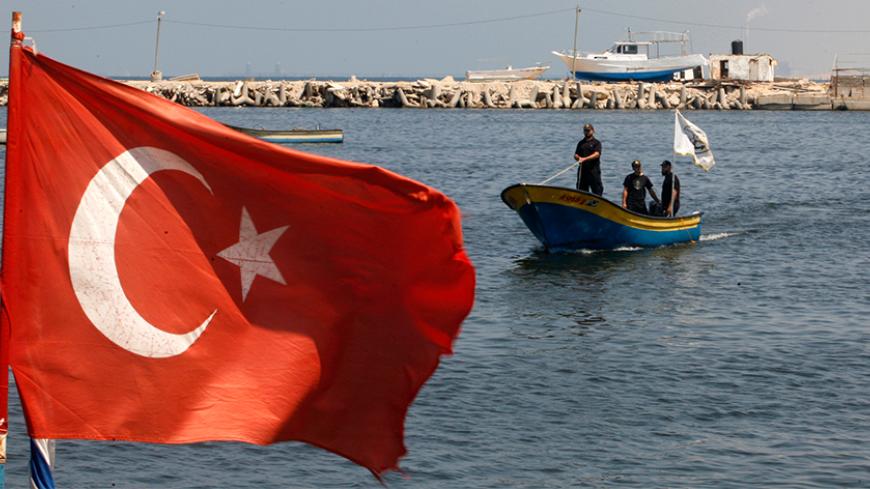 RAMALLAH, West Bank — Hamas leaders on Feb. 25 announced significant progress on Israeli-Turkish reconciliation negotiations, especially on a proposed floating harbor off the Gaza Strip. The negotiations have inspired optimism in the Hamas movement, but the harbor proposal evokes quite a different reaction from the Palestinian Authority (PA).

On Feb. 29, the Israeli Hebrew newspaper Yedioth Ahronoth said a joint Turkish-Israeli statement would be issued about the offshore harbor within days. The news angered the Fatah-controlled PA, which governs the Gaza Strip and parts of the West Bank. However, a statement has yet to be issued as negotiations continue.

The negotiations are designed to finalize a reconciliation agreement between the two countries, whose relationship deteriorated when the Israeli army attacked the Turkish Mavi Marmara ship off the coast of the Gaza Strip in 2010.

During the negotiations, Turkey raised three conditions for normalization of relations: a public apology for the 2010 attack, financial compensation for its victims and a lift of the blockade Israel has imposed on Gaza.

Based on the positions of Palestinian officials from the PA and PLO factions, it seems that these Palestinians have been infuriated by these negotiations, which started in December without any coordination with the PA or the PLO. They fear that the talks could be a step toward Turkish supervision of the Gaza Strip through Turkish-Israeli security and economic understandings and could further entrench the divide between the West Bank and the Strip.

One idea for ​​creating a floating harbor off the Gaza Strip was raised by Israeli Minister of Transport Yisrael Katz on July 24, 2014. The idea consisted of constructing an artificial island 4.5 kilometers (almost 3 miles) off the coast of Gaza with port and power facilities and an airport to transport goods into the Gaza Strip. The island was to be linked to Gaza by a bridge with a checkpoint, and the bridge was to be used to transmit electricity and allow the transportation of water, goods and persons. The project was supposed to be subject to international control and supervision, provided that Israel handled maritime security, as well as port inspections.

The floating harbor would be served by a Turkish Cyprus port, some 250 miles or more away.

Azzam al-Ahmad, a Fatah Central Committee member and head of the Fatah reconciliation delegation, told Al-Monitor, “President Mahmoud Abbas and the concerned Palestinian authorities tried to inquire of the Turkish side about the Turkish position on this matter, but we have not received any response yet.”

On Turkey's role in the harbor negotiations, Ahmad said, “The mediations from outside the framework of the PA are unacceptable, since they consecrate division. Turkey or any other country is not entitled to negotiate with Israel on any part of our country. The legitimate Palestinian leadership did not ask Turkey to intervene and negotiate on our behalf.”

As the PA lacks any legal parameters to confront the issue of this port, it is relying on political and diplomatic efforts to obstruct the project.

Many factors are worrying the PA, including its concerns over the potential for Turkish administration of Gaza. That move could be seen as support for the internal divide separating the Gaza Strip from the West Bank by establishing a maritime route to Gaza that is not under the PA’s control. For the PLO, Turkey’s proposed floating harbor is less than what it would have gained in the Oslo Accord signed with Israel on Sept. 13, 1993. Article 7(d) of the accord specified that “in order to enable the [self-government] council to promote economic growth, upon its inauguration, the council will establish, among other things, a Palestinian Electricity Authority and a Gaza Sea Port Authority.”

Ahmad said, “Gaza’s international airport and the [uncompleted] seaport project fall within the Palestinians' rights by virtue of the signed agreements between the PLO and Israel. These rights may not be renounced, and new negotiations undermining these rights must not be held. This is our right and we will not waive it.”

He said the joint Palestinian delegation he headed, which held indirect negotiations on a truce in the Gaza Strip with Israel brokered by Egypt after the war on Gaza in 2014, refused to include the seaport and airport on the agenda of the negotiations since they are rights that are not supposed to be subject to negotiations.

In an official statement March 1, Hamas denounced the position of the PA and Fatah and their refusal to set up a floating harbor in the Gaza Strip.

Ziad al-Zaza, a member of Hamas’ political bureau and an adviser to Ismail Haniyeh, former prime minister of the PA, told Al-Monitor, “The PA’s position is not a patriotic position, since the port of Gaza would be for all of Palestine and not for Gaza only. It aims to break the siege on the Gaza Strip. Whoever refuses Gaza’s port or airport would be further consecrating the siege.”

He added, "We do not have the details on the negotiations. When the negotiations are done and a deal is reached, we will peruse and discuss the details since we are not a negotiating party. We call upon the world to help lift the siege on Gaza and we reproach anyone who acts to the contrary.”

Egypt also rejects the idea of ​​creating a floating harbor in the Gaza Strip, and its stance represents a pressure card that could foil the project.

Writer and political analyst Mustafa Sawaf told Al-Monitor, “The Egyptian refusal of the floating harbor project stems from Egypt's desire to keep its hands on the Palestinian issue and to keep any other party from interfering, especially Turkey, in light of the feud between them.”

The PLO factions expressed their concerns over the project. Kayed al-Ghoul, a member of the political bureau of the Popular Front for the Liberation of Palestine, told Al-Monitor, “This project entrenches the separation between the West Bank and Gaza and encourages Israel to propose the idea of turning the Gaza Strip into an independent Palestinian entity as part of a regional solution, away from the West Bank.”

On Turkey's role, Ghoul said, “Turkey wants to justify the normalization of relations with Israel by easing the blockade on Gaza, which will enhance its influence over Palestinian affairs. Turkey is well aware of the central importance of the [Palestinian cause] for the Arab peoples. This may be part of its conflict with Egypt, which accords a significant importance to the Gaza Strip.”

Walid al-Awad, member of the Political Bureau of the Palestinian People's Party, told Al-Monitor, “Turkey and Israel are negotiating on replacing previous agreements and achievements, such as the Gaza International Airport, with less-favorable agreements that may turn Gaza into a Turkish-governed region, since the floating harbor would be linked to Turkish Cyprus and would be under the protection of NATO and Israel’s control.”

Awad added that Turkey’s negotiations with Israel without Palestinian input suggest that Turkish leaders — who believe the Palestinian people have no representative — are revisiting the idea of Ottoman tutelage and are negotiating on behalf of the PA without any prior consultations.

Palestinians fear that as long as they remain unable to end their divisions, form a national unity government ruling over the West Bank and Gaza Strip and hold elections, Palestine will remain a magnet for political and economic projects for all countries aspiring to increase their influence in the region.