Israeli officials announced their opposition to building a floating harbor off the Gaza coast, which Hamas condemned and considered to be another measure to tighten the siege on the Gaza Strip. 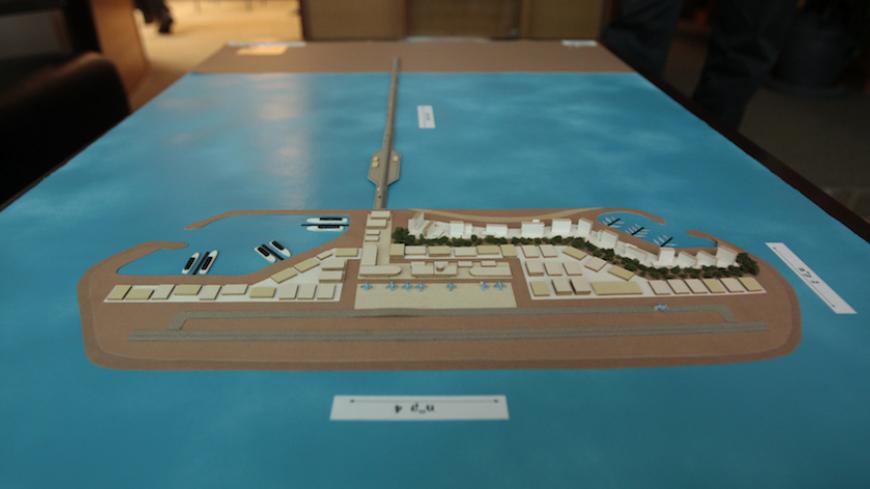 A model of an artificial island off of Gaza is displayed at the Transport Ministry in Jerusalem, March 30, 2011. - REUTERS/Baz Ratner

GAZA CITY, Gaza Strip — During a meeting of Israel’s security Cabinet Aug. 5, Israeli Prime Minister Benjamin Netanyahu and Defense Minister Avigdor Liberman expressed their objection to the plan by Israeli Transport Minister Yisrael Katz to establish a port off the coast of the Gaza Strip.

Katz had revealed in January a plan to build a port by creating an artificial island just 4.5 kilometers (roughly 3 miles) off the Gazan coast. The port would have energy facilities and a runway for planes. The island would be linked to Gaza through a bridge with a security checkpoint. He said that international parties — which he did not name — would be in charge of funding and building the port that would be internationally controlled and monitored, so long as Israel would be in charge of the maritime security as well as inspection at the port.

According to the Hebrew-language newspaper Israel Hayom, Netanyahu and Liberman had “objected to the plan as there would be no guarantee of [Israel’s] full control over the goods and the people moving through the port, even if a separate [artificial] island is built [off Gaza’s coast].”

The newspaper pointed out that contrary to Netanyahu and Liberman’s position, Israeli senior politicians said that the Israeli army and the Israeli General Security Service (Shin Bet) found no security problem that could emanate from establishing this port. “Some officials in the foreign and finance ministries believe that this solution [establishing a port in Gaza] would be good on both the political and economic levels. Katz had asked the Cabinet to form a ministerial staff to embark on the project, but his request was denied,” the paper reported.

Hamas reacted to Israel’s refusal to build the port. In this context, Ismail Haniyeh, the deputy head of Hamas’ political bureau, said during the Aug. 5 Friday sermon at the Abdullah bin Omar Mosque in Gaza, “Building a port in Gaza and along the Gazan coast is an inherent right of the Palestinian people and is an entitlement [that should have been granted] following the negotiations in Cairo, in virtue of which the war and aggression came to an end,” in reference to the 2014 Israeli war on Gaza.

The port issue was part of the Egyptian-sponsored truce talks between Palestinian factions and Israel that ended the 2014 war. However, the final agreement that came out on Aug. 26 of that year did not include Israel’s approval on this item [building a port]. Rather, both parties agreed on resuming said negotiations to discuss this issue a month after the truce, which has yet to happen.

Netanyahu and Liberman claimed they opposed the building of this port fearing Hamas would use it for smuggling operations, namely smuggling of arms. In this regard, Hamas’ official spokesman Hazem Qassem told Al-Monitor, “We find this refusal unacceptable. The occupation [Israel] is making flimsy excuses to tighten the blockade on Gaza. Hamas could never use the port for smuggling; it wants to be open to trade with the world.”

He explained that Hamas was not the only one demanding the establishment of a port. “It is a popular demand, and this is why the Palestinian delegation had put it on the table during the 2014 truce talks. The delegation included representatives from several Palestinian factions, such as Hamas and Islamic Jihad, and was headed by Azzam al-Ahmad, who is a member of Fatah’s Central Committee,” Qassem said.

“The port issue was also brought up during the reconciliation talks between Turkey and Israel, which reached [an agreement] on June 27, but no progress on this issue has been made. However, this is not the end. So we hope the international community would put pressure on Israel in order to build a port in Gaza,” he concluded.

For his part, Walid al-Moudallal, a professor of political science at the Islamic University in Gaza, mocked Israel’s justifications for refusing to build a port in Gaza. “Certainly, Hamas has its ways and means to smuggle weapons into Gaza, but it will never think to use the port for this purpose. This is because the port [covers for] a human need and aims to alleviate the Israeli siege and put an end to the economic dependency on Israel,” he told Al-Monitor.

Moudallal said that Hamas did not receive the approval of Israel to build this port during the 2014 peace talks between the resistance factions, namely Hamas, and Israel. This is because Egypt, which sponsored said talks, prevented Hamas from making any significant achievements during the war, as [Hamas] is linked to the Muslim Brotherhood, which Egypt considers a terrorist organization. Also, Egypt postponed the talks on Hamas’ demands, including the building of a seaport and airport in Gaza, to a month after the truce enters into force — but Egypt has yet to resume these talks.

He added, “The Palestinian Authority has also worked secretly to prevent Hamas from convincing Israel to build this port during the [2014] talks, as the PA is fighting any attempt by Hamas to realize political or social achievements [that would improve living conditions].”

Political analyst Talal Okal agreed with Moudallal and told Al-Monitor, “Even if Israel is pressured by some states to approve establishing a port, a seaport and airport will not be built in Gaza as long as reconciliation is not achieved between Hamas and Fatah, which represents the PA. The PA is undermining [all such] efforts, as it does not want recovery or economic development in Gaza under Hamas’ rule,” Okal told Al-Monitor.

Wadih Abu Nassar, a political analyst specializing in Israeli affairs, also believes that establishing a port in Gaza could prevent a new military confrontation. He told Al-Monitor that a number of Israeli officials agree with this and are pushing for building the port in Gaza, including Katz and head of the Labor Party Isaac Herzog.

Nassar said, “The Israeli parties supporting a port in Gaza believe it will benefit Israel by guaranteeing calm on its southern front. This port would also reduce the chances of ending the internal Palestinian division, since Hamas would not need to reconcile with Fatah if a port is built in Gaza as the port would improve the people’s living conditions,” noting that Israel is seeking to prevent reconciliation between Fatah and Hamas as it would strengthen Palestinians in their confrontation against Israel.

In light of the urgent need to build a port in Gaza to improve living conditions and of Israel’s opposition, the situation between Gaza and Israel seems to be heading toward further blockade and violence and farther away from stability and peace.