Hamas is working to open and operate its Gaza seaport, especially since countries such as Turkey, Cyprus and Greece apparently have agreed to send and receive ships from Gaza. 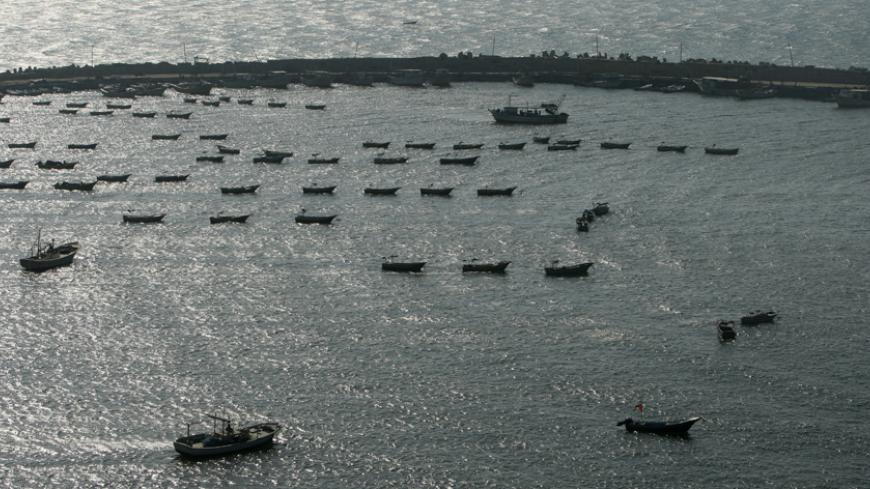 The siege on Gaza is tightening and living conditions deteriorate day by day. Voices are speaking out about the possibility of an implosion because of a lack of any glimmer of hope for Palestinians in light of the continuing closure of crossings and the lack of reconstruction.

Amid these disastrous conditions, Alaa al-Batta, the spokesman for the Palestinian Governmental Committee for Breaking the Siege in Gaza, told Al-Monitor, “The commission will launch ships from the Gaza port to a number of countries. A ship is prepared to carry patients and students, to be the first vessel departing from the port in the next two months. We have begun the necessary procedures in preparation for building the seaport that will connect the Gaza Strip to the outside world. We have received approval from several countries to begin implementing maritime trips.” He did not name the participating countries.

Al-Monitor learned from government sources in Gaza, who spoke on condition of anonymity, that Turkey, Cyprus and Greece were ready to receive ships coming from the Gaza port.

On Jan. 29, 2014, Palestinian factions in Gaza called for supporting the first maritime voyage from the Gaza port, and to challenge the siege imposed by Israel. Gaza is closed off, deprived of transport and communication with the outside world, resulting in a disastrous situation for thousands of patients, students and humanitarian cases.

Al-Monitor visited the Gaza port, where a banner was hanging that read: “The Port Authority: Gaza International Port.” Written beneath it was: “Project to establish Gaza Port facilities.” There were two additional banners that indicated a departure lounge and an arrival lounge.

Hamas has long fought for the completion of the port, and the issue was included in cease-fire negotiations during the Gaza war in July and August 2014. The movement engaged in tough talks with Israel, under Egyptian auspices, to obtain preliminary approval for establishing the seaport, but it was not achieved.

Hamas knows well that the port’s operation — which was technically inaugurated Jan. 25 — should pass through legal and political procedures with Israel and the Palestinian Authority (PA), so that the Gaza Strip can connect with other ports on the opposite shores of the Mediterranean Sea. Yet, Israel’s refusal of the terms of the truce pushed Hamas to make a unilateral decision — in agreement with the various factions in Gaza — to open the port on Jan. 25. This could provoke Israel, and no one knows how the latter will react to the departure of the first ship from Gaza without its consent.

Immediately after it was announced that work had begun to open the port on Jan. 25, Gaza's residents responded with varied comments. While some welcomed the move, others wondered how the port could operate without agreement from Israel and the PA. For his part, Ismail Radwan, a Hamas leader and former minister of religious endowments, told Al-Monitor, “Opening a seaport in Gaza is linked to the truce agreement concluded after the last war, yet the occupation was not committed to implementing the agreement. We call on the countries of the world to send ships to break the siege on Gaza and inaugurate a maritime route to the Gaza Strip.”

Meanwhile, Ashraf Abu Zayed, the spokesman for the Popular Commission to Break the Siege, told Al-Monitor, “The commission has agreed with contractors to carry out construction work, to actually start establishing the port. It will be Gaza’s window to the world, in light of the ongoing Israeli siege on Gaza. We’ve been in touch with a number of European ports, and they’ve expressed willingness to deal with the Gaza port.”

“We’ve contacted the French and Dutch port authorities to secure the $43 million they committed to the port project," Abu Zayed said. "The costs for the waterway preparations that are currently underway are minor amounts, gathered from businessmen and foreign aid convoys that arrived to Gaza in the past.” He also confirmed that several European states — including Turkey, Greece and Cyprus — were prepared to receive ships through the waterway.

Abdul Fattah Abu Shakr, head of the economics department at An-Najah National University, said France and the Netherlands had pledged $43 million to establish the Gaza port. These two countries had announced that they will finance the seaport’s construction works and train the port’s workers in 2000, before the Al-Aqsa Intifada erupted.

Hatem Abu Shaaban, an engineer and a Palestinian National Council (PNC) member, said in a report published in late 2014 that the operation of the port would provide 2,000 jobs, helping to reduce unemployment in the Gaza Strip. It would also increase revenue for the government, remove Israel’s hands from Palestinian imports and exports, attract businessmen from abroad, revive tourism, facilitate the movement of people to and from Gaza, and strengthen foreign relations with all countries of the world.

Hamas is well aware that Israel will not stand idly by if the Gaza port opens without security monitoring. The Israelis say that the Gaza port, if opened, would become a sanctuary for Iranian and Turkish ships. Moreover, they will not be able to control all the borders of Gaza, nor ensure that weapons and fighters not smuggled into Gaza.

Just hours after the Gaza war ended last Aug. 26, prominent Hamas leader Mahmoud al-Zahhar was asked if he expected Israel to prevent the operation of the port. “The Palestinian people will build the seaport and the airport without seeking permission from anyone. If anyone attacks our port, we will respond by bombing their port. And if anyone attacks our airport, we will bomb their airport,” he answered, referring to the rockets launched by Hamas toward Tel Aviv's Ben Gurion International Airport.

The PA has refrained from commenting on Hamas’ efforts to open the Gaza port. However, a senior official from President Mahmoud Abbas’ office, speaking to Al-Monitor on condition of anonymity, said, “The PA is cautious of any effort that will separate Gaza from the West Bank, paving the way for the establishment of a mini-state outside the independent Palestinian state. So long as the port’s opening has not received official approval from the consensus government and the PA presidency, it will further the separation between Gaza and the West Bank — even if it succeeds in lightening the siege on the Gaza Strip.”

It seems that Hamas is moving forward to lift the siege on Gaza by all means possible after the cease-fire talks with Israel came to an end, and relations with Egypt were strained and the PA failed to open Gaza’s crossings to the outside world.

All of this may mean opening the door to a confrontation between Hamas and Israel, calling to mind the Turkish Mavi Marmara incident in 2010.