Is Gaza seaport construction on its way?

Gaza residents are hoping that the small fishing port being constructed near Khan Yunis will one day be transformed into a real commercial sea port. 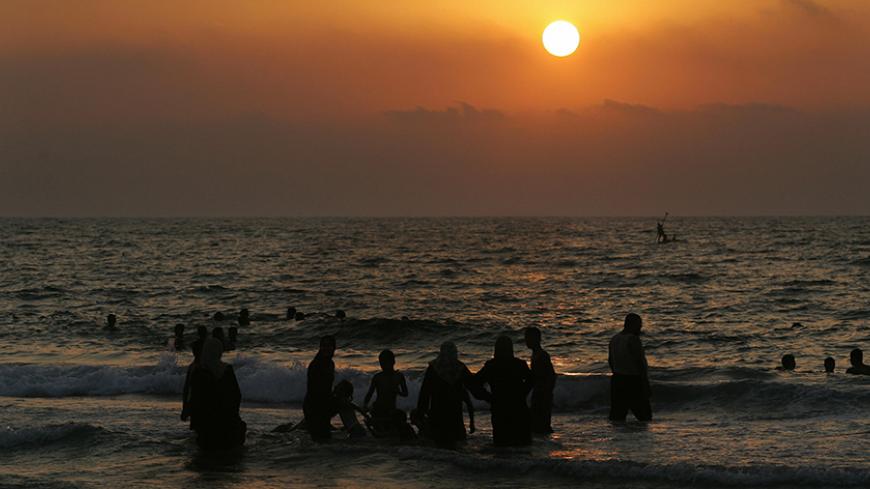 A functioning airport and seaport are the dream of every Palestinian living in the Gaza Strip. Calls for their construction in Gaza date to the cease-fire negotiations between Israel and Hamas during Operation Protective Edge in 2014. At the time, the leaders of Hamas made their agreement to a cease-fire conditional on a commitment by Israel and Egypt (which hosted the talks) to allow the construction of an airport and seaport and an end to the closure now imposed on Gaza.

The original demand was rejected, but in all talks with the sponsors of the agreement or donors who help rebuild the Gaza Strip — Turkey, Qatar, Saudi Arabia and United Arab Emirates — the Hamas leadership demands repeatedly that these countries pressure Israel to allow Gaza to build an airport and a seaport.

The construction of a seaport and airport in Gaza would require the Palestinians to raise hundreds of millions of dollars in addition to having to deal with security issues. Hamas leaders believe that those donor countries, which occasionally provide humanitarian and financial aid to the Gaza Strip, would agree to fund these dream projects. At the same time, the leaders are also convinced that such projects would ease the suffering of the 1.8 million Palestinians living in Gaza once and for all, and also strengthen the position of the Hamas regime.

In an interview with the Palestinian newspaper Al-Quds in October, Israeli Defense Minister Avigdor Liberman said that if Hamas stops arming itself, Israel would allow the creation of an airport and seaport in Gaza. For its part, Hamas is unwilling to consider stopping the influx of weapons into Gaza or the disarming of the Hamas army and the Izz ad-Din al-Qassam Brigades.

In the reconciliation talks between Israel and Turkey, the Turks demanded that Israel lift the closure on Gaza and allow the Palestinians to build the two ports: air and sea. While Israel rejected this demand, it did promise to ease the closure gradually, in accordance with Hamas’ actions. Just a few days after reconciliation between the two countries was announced in June, a Turkish cargo ship arrived in Gaza with a symbolic load, including crates of medicine, clothing and toys. While these were not enough to ease the siege of Gaza, they showed that Turkey had not abandoned the people living in the Gaza Strip, and that Turkey still considers that it bears responsibility for their well-being.

In keeping with the understandings reached in the reconciliation agreement with Turkey, Israel now allows the transfer of raw materials into Gaza almost unhindered. These are used for extensive Turkish projects, including the construction of hospitals and seawater desalination plants. The latter should ease the severe water crisis in Gaza, which has resulted from the collapse of its water system and the penetration of sewage into Gaza’s groundwater resources.

But the “big news” being passed around by word of mouth among the people of Gaza is that work has begun on the infrastructure for one of the “Palestinian dream projects.” Palestinians living in the southern part of the Gaza Strip have reported to Al-Monitor that work has started on the construction of a seaport along the stretch of coast between Khan Yunis and Deir al-Balah. Local residents report that huge cranes have been brought to the construction site, and that work has started on an anchoring station there. The area, which was once part of the Katif settlement bloc (evacuated in 2005), was selected because of its open topography, which includes a winding stretch of coast that can be developed into a port serving smaller boats and ships.

The story being told in the Gaza Strip is that Israel and Turkey have secretly agreed to the construction of a seaport. Once it is built, small ships would be loaded with raw materials and goods at an anchoring station in the open sea, under international supervision. The ships would then sail from there to the new port in Khan Yunis. Reports claim that a spit extending 100 meters (328 feet) into the sea has been constructed so far, to create an artificial bay along the Khan Yunis coast. Work on the project is expected to last another two years at least.

Inevitably, the people of Gaza are pleased with these reports. They now believe that the siege of Gaza is about to be lifted, thanks to the stubborn insistence of Turkish President Recep Tayyip Erdogan. In fact, they consider Erdogan to be the closest friend of the Gaza Strip today.

Al-Monitor approached the Office of the Coordinator of Activities in the Territories (COGAT) to ask whether Israel knows about and has approved the creation of this new harbor in the Khan Yunis region for a new port or any other purpose. It also asked whether Israeli officials are helping with the project by granting approval and easing the movement of raw materials, cement and heavy equipment through the border crossings. The Civil Administration, which is part of COGAT, responded that Israel knows nothing about the construction of any port in Gaza whatsoever, and that the officials responsible for such activities have not received any reports of unusual construction.

In contrast, a senior Palestinian official told Al-Monitor that a seaport is being built in Gaza, but that this port is intended to serve Gaza fishermen only. At this stage, the port will only be able to accommodate fishing boats, and not small cargo ships. The source also confirmed that the Turks are behind the project. He added that the location of the fishing port was chosen carefully, based on the assumption that in the future it could be expanded to accommodate larger ships. The plan is that in the future, large mercantile ships would be able to unload heavy cargo at an anchoring station at sea. From there, the goods would be transferred to smaller ships, which could anchor in the port now being built.

The source added that Israel knows about the work being done and has approved it. He said that Hamas and Turkey believe that within a short time, the fishing port now being built between Khan Yunis and Deir al-Balah will become Gaza’s official port. This port would be a center for the transfer of raw materials, food and goods, and would also offer Palestinians an exit portal from which they could travel freely to the rest of the world. On the other hand, it can also be assumed that the new Khan Yunis port will only be allowed to fulfill its purpose if Hamas is prepared to follow the terms set by Israel’s defense minister and disarm its troops.