The Palestinian Authority needs at least $15 billion to properly restore Gaza’s economy, while donors have only pledged $5.4 billion for interim reconstruction. 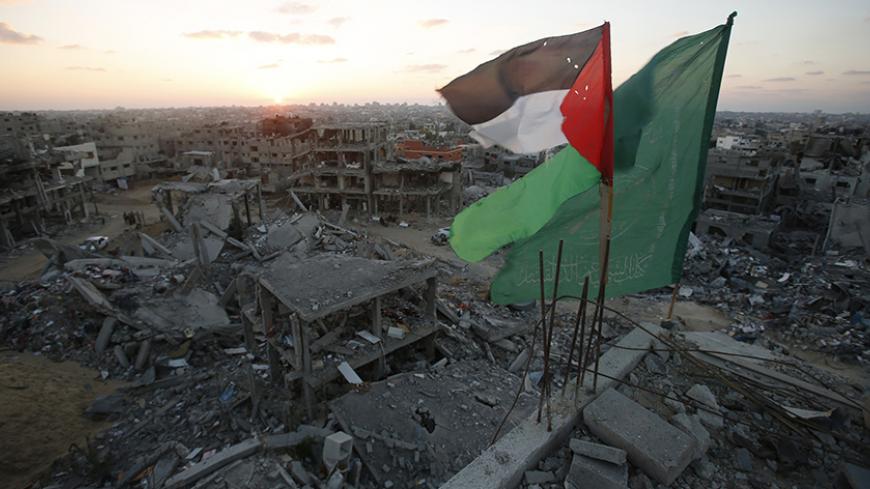 A Palestinian flag and a Hamas flag (R) flutter atop the wreckage of a house, which witnesses said was destroyed during the seven-week Israeli offensive, in the east of Gaza City, Sept. 3, 2014. - REUTERS/Suhaib Salem

The Gaza donor conference in Cairo on Oct.12 achieved pledges totaling $5.4 billion, half of which were allocated for the reconstruction of the Gaza Strip. Thus, Gazans are awaiting the start of the reconstruction, which they hope will put an end to their suffering.

The Gaza Strip has been subject to an Israeli blockade since 2007, with a noticeable easing since mid-2010. During the blockade it has seen three wars, with the latest one lasting 51 days and being the most severe in terms of the extent of the destruction it caused. Gaza's citizens expect the donors conference to allocate sufficient funds to address the destruction, and to lift the political and economic siege.

In a 76-page document drafted in pristine English, with linguistic and technical coordination, the Palestinian Authority (PA) presented the donors conference with a plan for the reconstruction of the Gaza Strip at a cost amounting to $4.03 billion. The plan includes four categories:

The PA used the donors conference as an opportunity to request funding to support the budget and to finance strategic projects. The PA's plan submitted to the conference included $4 billion for the reconstruction of Gaza; an additional $4.5 billion to support the PA budget in the next three years, from 2015-17; and $7 billion to finance the implementation of long-term projects, including the rebuilding and operation of Gaza's airport and seaport, building a large water desalination plant and taking advantage of gas fields in Gaza's sea.

It would be very difficult for the one-day donors conference to succeed in securing $15.5 billion, in light of the financial crisis still plaguing various European countries and the United States, as well as the conflicts and humanitarian catastrophes in many parts of the world. Furthermore, some donor countries fear that their previous donations have gone to waste, as the latest war destroyed infrastructure that was rebuilt using earlier funds. Thus, donor parties are waiting for the national reconciliation government to start its work in the Gaza Strip, as a prerequisite to make further pledges.

Philosophy of the PA plan

It seems that history will repeat itself, for obtaining the funds of donors will be easier than disbursing them. The donors conference in Sharm el-Sheikh in March 2009 raised extensive funds to rebuild Gaza following the 2008-09 war, yet little effort was exerted to lift the blockade. This meant that many of the donors' pledges remained merely ink on paper and prolonged the suffering of those affected for many years.

This time, the Israeli government has begun to provide notable measures, even prior to the donors conference. It allowed for some international institutions to bring in construction materials and permitted the ministers of the reconciliation government to enter Gaza on Oct. 9, which coincided with a sacred Jewish holiday. This served as an important signal regarding Israel's approval of the national reconciliation. Furthermore, the Israeli government announced it would allow the entry of thousands of workers from Gaza, among other places, to work there.

While these are notable measures, compared to the situation of the strict blockade imposed since 2007, they are not sufficient to meet the requirements of reconstruction. The United Nations, through its special coordinator for the Middle East Peace Process, Robert Serry, has developed a detailed mechanism that allows for a tripartite committee comprising the UN, the PA and the Israeli army to fully monitor the raw materials needed. This mechanism involves installing cameras to monitor raw material storehouses, as well as following up on every truck carrying these materials, thus ensuring Hamas does not receive any of the materials to use for building tunnels or restoring its military equipment.

Yet, this mechanism has not been revealed until now, reinforcing the doubts surrounding it. Some reports have suggested that this mechanism means the UN has legitimized the Israeli blockade on Gaza, rather than working to lift it. It is certain that the proposed UN mechanism, which includes employing a large army of between 25 and 400 foreign experts, will be a huge financial, administrative and security burden, thus prolonging the reconstruction process for many years. It also means the reconstruction process will be driven by the UN, rather than the PA, and will result in Palestinians in Gaza praising the UN rather than crediting the PA.