While UNRWA is assessing the houses damaged or destroyed during the Gaza war, some Hamas officials are accusing the international relief organization of working with Israel to the detriment of the Palestinian people. 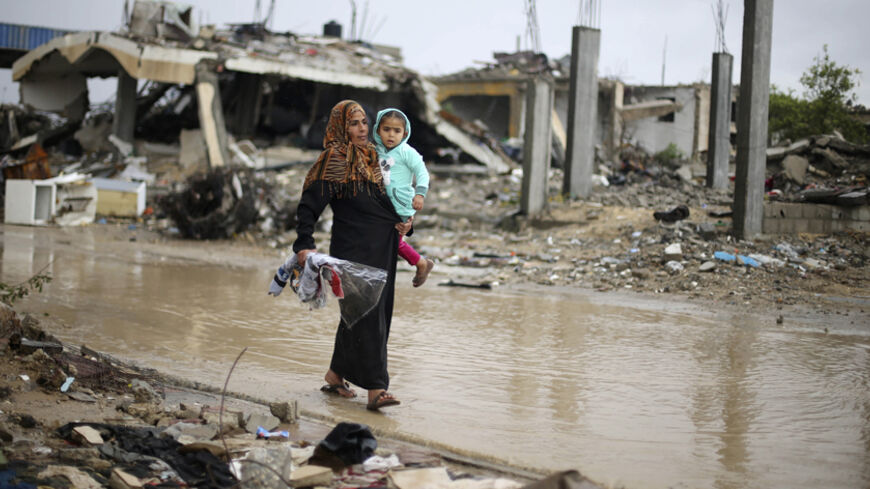 A Palestinian woman carries her daughter as she walks past her house, which witnesses said was destroyed by Israeli shelling during the most recent conflict between Israel and Hamas, in Khan Yunis in the southern Gaza Strip, Nov. 4, 2014. - REUTERS/Ibraheem Abu Mustafa

GAZA CITY, Gaza Strip — Palestinians are hoping for reconstruction to start and for the Israeli blockade to be lifted following Israel’s bloodiest war on Hamas, and especially after Hamas handed over the reins of power in the Gaza Strip to the unity government, led by the Palestinian Authority (PA). However, the blockade continues to exist and the reconstruction has become conditional, as is the case of lifting the blockade. Meanwhile, Hamas continues to provide financial support for its popular base, despite Israel’s policy to dry up its income sources.

Two weeks before the donors’ conference was held in Cairo on Oct. 12, which succeeded in bringing in necessary funds of $5.4 billion from international and Arab countries to rebuild Gaza, a team affiliated with the United Nations Relief and Works Agency for Palestine Refugees in the Near East (UNRWA) was tasked with reporting and registering the damaged houses during the latest war for compensation. The team visited the house of Abu Uday in the Bureij refugee camp in central Gaza to check and register the damages.

A few days later, one of the UNRWA workers returned and told the family to refer to the organization’s main office in the city of Gaza, without providing further information. The family found out later that UNRWA would not undertake the reconstruction of one of the apartments in the house because it was a direct target of Israeli attacks.

Apparently, Abu Uday’s four-story house was hit because a man affiliated with the Palestinian resistance had lived with his siblings in one of the apartments before the war.

In an interview with Al-Monitor, Abu Uday said, “UNRWA required us to bring a document from the municipality, confirming the damages in the house. And so we did. Afterward, the organization sent out two field researchers to verify the damages.”

“The researchers required us to go to the UNRWA’s main office, where my father was informed that the house would be rebuilt, except for the apartment that was a direct target by Israel. At first, we thought that they refused to rebuild the house altogether,” he added.

About a week following the reconstruction conference, on Oct. 22, the field researchers committee, accompanied by engineers, visited again Abu Uday’s house, after he had filed a complaint about this issue to UNRWA through one of his connections. However, the organization reiterated that it was not responsible for rebuilding an apartment that was a direct target by Israel.

Similarly, the family of Al-Sayed Samir also lost its entire four-story house during the war, directly hit by Israeli jets. One of Samir’s brothers, who is a military commander with the Izz ad-Din al-Qassam Brigades, used to live in one of the building’s apartments.

“UNRWA’s officers reported and registered the damages of the first three floors but left out the fourth, as it was [directly] targeted by Israel. Sources in Hamas confirmed to us that it will take it upon itself to rebuild the fourth floor, instead of UNRWA,” Samir told Al-Monitor.

Al-Monitor’s correspondent met with a UNRWA field officer, who said, “The organization held a meeting, where we were informed of [the nature of] our work in the field and how to report damages. We were also provided with a list of targeted houses that are not part of the reconstruction process.”

The officer, who spoke on condition of anonymity said, “Through its expert engineers, UNRWA assesses the damages of the houses methodically. The distribution of cement is also done carefully, as the people only receive the exact needed material, for fear that the resistance would use any surplus for other purposes.”

Hamas leader Ismail Radwa told Al-Monitor, “There are clear attempts to exclude some of the houses. We reject this discrimination in the reconstruction, which ought to be a project dedicated to all the Palestinian people. Thus, UNRWA is taking part in the Zionist plan. We refuse that an international body such as UNRWA be subjected to Israeli policy.”

Former Minister of Public Works in the Gaza government and Hamas leader Youssef al-Mansi said in an interview with Al-Monitor, “During al-Furqan battle in 2008-09 and the 2012 war, UNRWA did not intervene in the reconstruction of the houses of the resistance-affiliated people that had been directly targeted."

As a result of Hamas handing over power in Gaza to the unity government, the reconstruction of the houses excluded from UNRWA’s process is either entrusted to the Hamas movement — which is responsible for the people living in these houses — or to the Ministry of Public Works in the unity government. “We cannot abandon our people, and the reconstruction process is a duty of the international community and the national authorities,” Radwan added.

Regarding the targeted properties, Sarhan said, “The government is responsible for compensating any person, regardless of their [political] inclinations."

Some media sources reported Palestinian concerns that Israel might object on some of the names that are registered in UNRWA’s records regarding the agreed reconstruction process.

The Hamas movement expressed its objection to the reconstruction process brokered by UN special envoy Robert Serry as well as its delay. In a statement to local newspaper Al-Resalah, Mahmoud al-Zahar, a member of Hamas’ political leadership, said, "Hamas rejects the ongoing procedures as they aim at stalling the implementation of the reconstruction."

Political analyst Saleh al-Naami told Al-Monitor, “Excluding certain names from the reconstruction process reflects the Israeli-influenced policy inside UNRWA, which recognizes Israel’s narrative of events at all levels. But on what basis? Does [UNRWA] have an intelligence apparatus to reveal the names of those who must be excluded?”

“UNRWA’s behavior highlights the partnership between the UN and Israel in war crimes against the Palestinian people, because no country in the world has the right to target the houses of the resistance people and their children,” he said.