Owners of houses partially or totally destroyed during the recent war on Gaza are concerned about the delayed reconstruction due to the political dispute between Hamas and the Palestinian Authority. 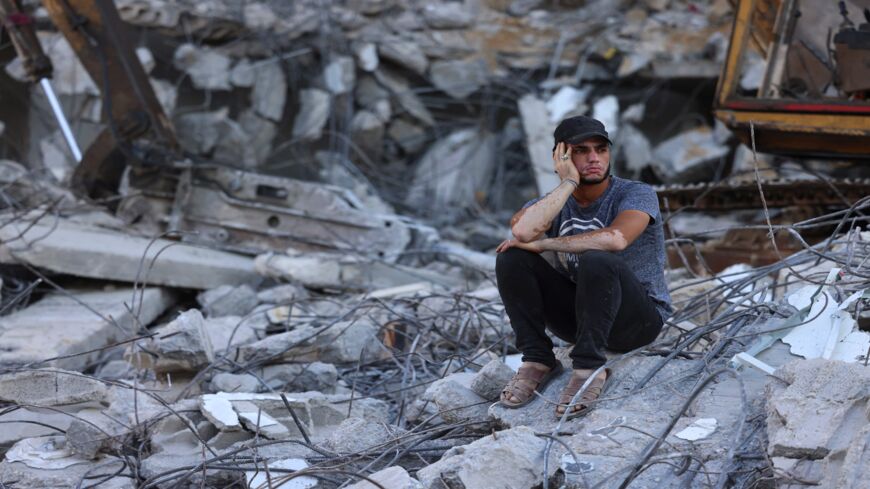 A Palestinian man sits on the rubble of a building destroyed by Israeli airstrikes last month in Gaza City on June 15, 2021. - MOHAMMED ABED/AFP via Getty Images

GAZA CITY, Gaza Strip — Abu al-Ezz Sheikh Dib, 45, spoke about his suffering due to the delayed reconstruction of destroyed houses in the Gaza Strip following the 11-day war. He told Al-Monitor, “My five-story house where 47 of my family members live has been tilting 15 centimeters every day as a result of the Israeli airstrikes during the recent war. It is located on the main street where the Fairouz Towers stand in the west of Gaza City. The foundations of the house have been destroyed, and the civil defense and police have notified me of the need to vacate the house."

He added, “I did not receive a rent allowance after I was informed of the need to vacate the house, which is on the verge of collapse. The first floor was totally destroyed by the strikes. Despite my bad economic situation, I am among the people whose salaries have been cut by the Palestinian Authority (PA) in Ramallah.”

In its latest campaign against Gaza, Israel used the new tactic of destroying the floors of some homes while leaving the whole house standing, which is what happened with Dib’s home.

Bitterly, he noted, “I have cancer, and my wife has chronic diabetes. We are all stranded now. We only get a food basket (provided by Qatar through the Gaza government) that does not meet our food needs.”

Dib said he incurred losses worth $300,000 because his house is on the verge of collapse and his electrical appliance shop, located on the first floor of his house, was destroyed. He only cares about expedited reconstruction no matter who the party in charge is to cut his suffering short, he said.

The latest war on Gaza totally destroyed 2,000 residential units and partially ruined 22,000 others, according to the Gaza Ministry of Housing and Public Works. The infrastructure was massively destroyed. Meanwhile, government authorities in the Hamas-held Gaza Strip estimated the direct losses of the war at $500 million.

A number of countries, including Egypt, Qatar and the United States, declared their assistance to reconstruct the Gaza Strip, but the political dispute between the PA and Hamas over the reconstruction process has pushed Cairo to delay talks on the issue.

Meanwhile, the United States and Israel refuse the transfer of aid directly to Hamas because it considers the group a terrorist organization, mandating instead that international assistance be coordinated with the PA.

Alaa Shamali, 35, a journalist who works at the Gaza-based Felesteen paper, told Al-Monitor, “My apartment, which houses my family of seven and is located on the first floor of the Anas Ibn Malik building on Yarmouk Street in Gaza City, was completely destroyed by the Israeli airstrikes.”

Shamali is now staying at his father’s house in al-Shajaiyah neighborhood. He said he reached out to the United Nations Development Program (UNDP), which offers aid to civilians, as well as to the Gaza Ministry of Housing and Public Works, to assess damages. But he has yet to receive any compensation for the losses incurred.

He noted, “During the 2014 war, the family house in al-Shajaiyah neighborhood was destroyed. Despite my attempts to provide my kids with a stable life, I am now back to zero.”

“Any delay in the reconstruction would mean long months of rent and instability. I hope all parties reach a solution that would satisfy the people affected and cater to their interests rather than the factional interests of Palestinian movements,” Shamali added.

Gaza City resident Mohammed Qadada, 32, director of Planet for Digital Solutions, told Al-Monitor, “My company specialized in digital solutions and marketing. It was totally destroyed during the shelling of the 13-story Hanadi Tower located in the west of Gaza City.”

He pointed out that Israelis did not give them enough time to evacuate the building and their equipment. The bombing destroyed six years of work and memories, he said.

Qadada said he continues to work at a small IT incubator with 50 employees despite the lack of compensation from any government body, stressing that he can’t stop working as clients rely on the company’s services.

Qadada said he wants compensation to rebuild his company no matter which party handles reconstruction, be it the PA or the Gaza government.

Hamed Mahdi, 35, a father of three and journalist at Felesteen newspaper, told Al-Monitor, “I spent my life’s work on my apartment in Al-Jalaa Tower in Gaza City, which cost $100,000, after 10 years of rent. But it was completely ravaged by the occupation’s shelling of the tower.”

He said the Ministry of Public Works and Housing and the Ministry of Economy in Gaza communicated with him to assess damage, but he received $2,000 from the Qatari Gaza Reconstruction Committee. He says this isn’t enough, especially since the rest of his family (parents, brothers and uncles) live in six separate apartments at Al-Jalaa Tower and have now become homeless after the shelling.

Mahdi said he doesn’t care about the party overseeing reconstruction, but he would rather Qatar handle it, as it handled the reconstruction of Al-Zafer Tower after the 2014 war, far from the PA and Hamas, whose political problems are endless.

Adnan Abu Hasna, media adviser to the United Nations Relief and Works Agency for Palestine Refugees (UNRWA) in Gaza, told Al-Monitor, “We started a week ago a damage assessment process in which 25 teams participated, and each team consisted of an engineer and a social researcher.”

He added, “We expect the assessment process to take place within the next few weeks. The UNRWA plans at the beginning of next month to provide cash assistance to families whose homes were completely destroyed or whose homes were severely damaged and rendered uninhabitable.”

“We launched a call for $38 million, and we will launch another regarding the reconstruction process and the required sums,” Hasna said, adding, “The UNRWA deals with the refugees because the UNDP deals with citizens in cooperation with the Palestinian Ministry of Housing.”

Muhammad Abu Jiyab, editor-in-chief of Al-Eqtesadia newspaper in Gaza, told Al-Monitor that “the delay in reconstruction will affect the economic reality of Palestinian families, especially those whose houses were destroyed, by increasing the rates of poverty and unemployment and engendering economic crises and a comprehensive economic collapse.”

In response to a question about the mechanism preferred by the international community for reconstruction in Gaza, Abu Jiyab said, “There is an international tendency to move ahead with reconstruction through the PA and not through the Hamas government, and there is talk about independent committees that Egypt may spearhead in partnership with government institutions in Gaza for implementation.”

He added, “This (independent committees) may be the best solution for the citizens of Gaza to speed up reconstruction and avoid political rivalries between the PA and Hamas.”