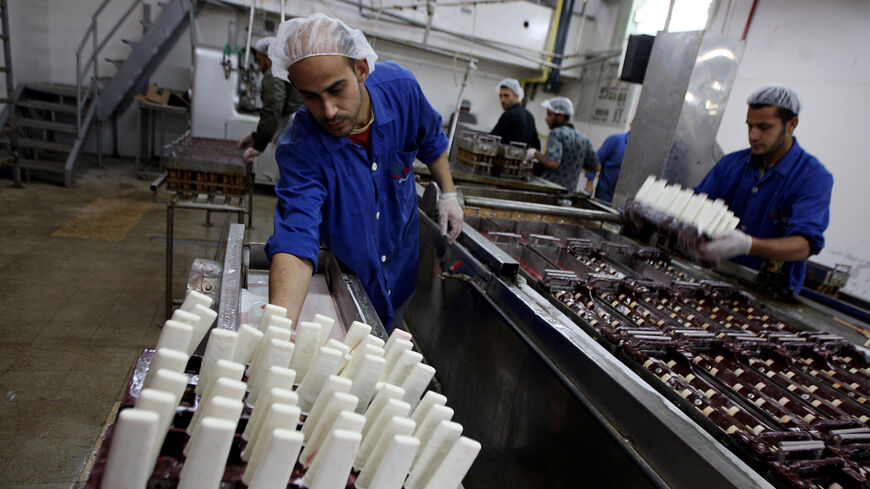 GAZA CITY, Gaza Strip — Sami al-Ghazali, the owner of the Maatoug Booza Factory, never thought that his investments in the local ice cream business in Gaza’s supposedly safe industrial zone would vanish in a blink of an eye. But on May 17, his factory was bombed by Israeli artillery shells and completely destroyed.

“I invested more than $500,000 to establish the factory in a safe area far from any potential Israeli attack,” Ghazali told Al-Monitor.

The factory produced over 5,000 liters of Italian gelato per month, a favorite among Gazans.

“Refrigerators, raw materials, machines and equipment, power lines for commercial production, all have been destroyed. It is so difficult to rebuild all this,” he said.

Anas al-Khudary, the owner of the Foamco Mattress factory in Gaza, was too shocked to continue speaking with Al-Monitor.

On May 17, fire broke out in the northern Gaza factory after it was hit by an artillery shell.

The factory, which stretched over an area of six dunums, was the main source of mattresses in the coastal enclave. One of the factory workers who spoke to Al-Monitor said the losses are estimated at $4 million.

On May 20, Israel and Hamas announced a cease-fire that went into effect early the following morning.

The Israeli raids also destroyed several other industrial facilities. The “Israeli army completely destroyed several factories in the Gaza industrial city, as jets bombed plants that used to employ dozens of people,” the Palestinian Industrial Estate and Free Zone Authority wrote on Facebook May 17. According to the authority, the factories that were destroyed also included Redimpex and the Ice Man Factory.

The industrial zone’s infrastructure such as water lines, roads and electrical systems, including solar panels, took direct hits. Food and cleaning services were also hit, including the Harb Company, the Clever Company, the Tal-Zuhoor Company and the BS Company for Solar Energy.

Mohammed Abu Jiyab, editor of Al-Eqtesadia newspaper in Gaza, told Al-Monitor, “The destruction of factories in Gaza is a direct targeting of its economic capabilities, with the aim of pressuring the coastal enclave politically and militarily.” He went on, “What was the aim behind the destruction of an ice cream factory? The Israeli army and the world are aware that this factory was not remotely a military target.”

According to Abu Jiyab, Gaza authorities gave him preliminary estimates that some 40 production facilities, 300 offices and shops as well as some 10,000 homes were damaged or destroyed by the fighting since it began on May 10.

“The economic destruction of industrial facilities and infrastructure will result in the unemployment of some 20,000 workers and the displacement of whole families. This is not to mention the huge losses in the productive sectors of Gaza. The losses exceeded $200 million within eight days,” he said.

Abu Jiyab added, “Reconstructing Gaza will require great international and Arab efforts, which must be carried out immediately this time as the recovery process won’t be easy. The restrictions on importing building materials will also impede the return of life to normal.”

He said that building materials will need to be expedited, explaining, “The Gaza Reconstruction Mechanism … prevents the entry of all necessary construction materials at the required speed.”

In a statement earlier this week, the Ministry of Agriculture in the Gaza Strip said the damage to the sector, already exceeding $17 million, had been worsening daily as the Israeli air raids continued for a second week. It reported daily losses of more than $500,000 with exports halted and farmers unable to reach their crops.

The ministry expected further damage and losses in the agricultural sector after shelling was sustained by hundreds of dunums and dozens of agricultural facilities, as well as the direct bombing of stores and warehouses for agricultural supplies.

Ali Maarouf, a 60-year-old farmer from Beit Lahiya in northern Gaza, told Al-Monitor, “On May 13, we left our homes along the border in Beit Lahiya to take shelter from the artillery shelling in UNRWA schools in Jabalia. It took me five days to be able to go back to the house and land.”

He went on, “Yesterday [May 17], I wanted to water the watermelon and was surprised by tanks firing tear gas at us. I could not get near the water pump. I left. My neighbors told me that the land was bombed with artillery shells. Now I don’t have any idea what happened to my land or the crops that need be watered daily."

The Ministry of Agriculture's statement also noted massive indirect losses in the fishing sector. Fishermen have been out of work for 12 days now.

Zakaria Bakr, head of the local fishermen union in Gaza, told Al-Monitor, “You can imagine the miserable state of fishermen who rely on daily fishing to make ends meet. What’s worse is that many harbors used by fishermen were also attacked, destroying several boats, which cannot be replaced or repaired due to the blockade.”

The municipality said in a statement, “The intensive bombardment that destroyed hundreds of homes and service facilities has greatly damaged electricity and water supplies as well as sanitation services in several neighborhoods, with serious health and environmental repercussions.”

“There has been deliberate targeting of roads, as 14 main roads and streets have been destroyed by direct bombing, especially the vital junctions in Gaza City, notably those leading to hospitals and universities,” the statement read.