An agreement of $1 million was signed to restore industrial facilities that were destroyed in the May 2021 war on Gaza, which came as a glimmer of hope for the stricken industrial city. 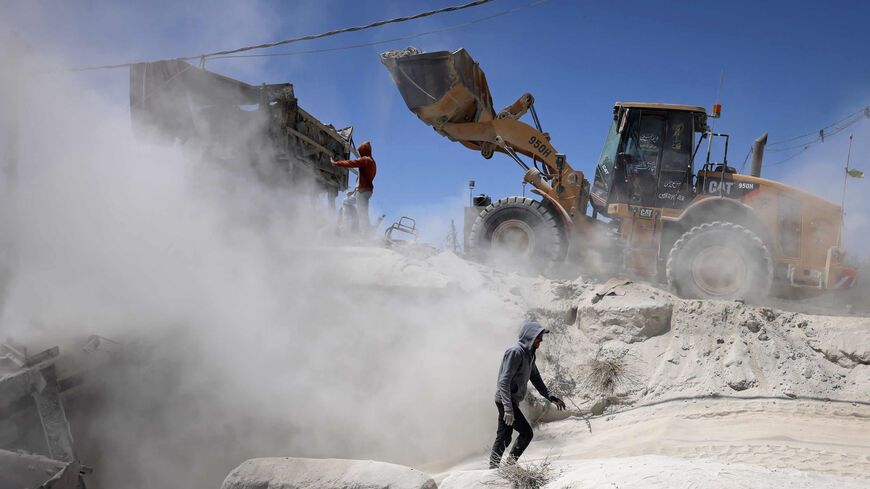 Works on the rehabilitation of Gaza’s industrial city, known officially as the Gaza Industrial Estate, that was destroyed during the May 2021 Israeli war on the Gaza Strip are ongoing as part of a self-financed project by Bashar Masri, a Palestinian businessmen and chairman of the Palestine Development and Investment Company (PADICO).

Masri has self-financed $1 million for the project, which would be carried out by PADICO under an agreement announced May 25 in Gaza City.

Masri, who is currently in the Gaza Strip to oversee the works on the industrial city, is seeking more projects to attract investments and develop the local economy in the besieged enclave, in the absence of funds due to the repeated wars in Gaza.

In the final days of the 11-day military conflict between Israel and Hamas in May 2021, Israeli airplanes deliberately bombed factories and economic facilities in the industrial city, incurring heavy losses worth $22 million.

The bombardment came despite the fact that the industrial city is considered a safe area, located in a remote area away from the population, and was never targeted by Israeli bombings in past wars.

But it seems Israel wanted to crush the Palestinian economy during last year’s war.

“This agreement was concluded because it is of paramount importance to rebuild the destroyed factories. Dozens of young men and women would be employed in the project, which once completed would create new job and investment opportunities in the industrial city,” Masri told Al-Monitor.

“I have funded this agreement in a bid to encourage investors to invest in the coastal enclave. Palestinian investors must look at the nation’s suffering, and the least they can do is to invest in Gaza, which is suffering from dire economic conditions,” he noted.

Masri regrets that Palestine lacks the support of Palestinian investors who “should use their funds to revive their own nation.”

“If we, Palestinians, do not invest in our own countries, no one from the outside will,” he said. "I still have a number of investment plans that I would like to implement in the future.”

This is not the first time Masri invests in Gaza. “I established [in 2011] Al-Mashtal Hotel in Gaza as part of efforts to boost the most important and prominent features of tourism in Gaza, which also provides job opportunities for thousands of young people,” he said.

Muhammad al-Najjar, vice chairman of the board of the Palestine Industrial Estate Development, which established the Gaza Industrial Estate, told Al-Monitor, “This agreement is an essential step in the reconstruction of the facilities destroyed during the previous war.”

He said, “[The project] would restore approximately 5,500 [square] meters of destroyed facilities at a value of up to $1 million, which will be the first step that would be followed by other measures in the coming period to restore life in the industrial city.”

He noted that other services in the city would be established and restored, such as solar energy, electricity production plants and desalination plants.

Najjar explained, “Although not a huge sum of money will be invested in the PADICO agreement, it will encourage other investors and businessmen to follow suit to help boost Gaza’s economy.”

He said, “During the May 2021 Israeli aggression on Gaza, 10 factories were completely damaged and 28 partially. The Gaza Industrial Estate is the most successful and the largest industrial area in Palestine [both in Gaza and the West Bank] because it is supplied with electricity round the clock, and includes water wells, desalination plants and civil defense, as well as safety and security points — something that makes it a hub for the local economy."

Dalou noted, “The city also offers job opportunities for more than 1,200 workers who come on site on a daily basis, in addition to the 3,200 workers who used to work remotely for the industrial city. Israel made sure to strike the nerve of the Palestinian economy in Gaza and turn Gaza’s clock back 10 years."

However, he continued, work and production in the industrial city did not stop despite the destruction caused by Israel. Since the beginning of May, several contracting and construction companies have started the reconstruction works in the area, to rebuild the 10 factories that were completely destroyed and restore the rest.

Dalou said that the construction work will finish in October.

In regard to the obstacles hindering the project, he said Israel continues to restrict the entry of materials through the border crossing under security pretexts, while the Hamas government is imposing huge taxes on some goods used in the reconstruction of the industrial city.

Dalou said, “I am responsible for communication … with representatives of international institutions. The industrial city is the first stop they visit when they come to the Gaza Strip, and I explain to them that this industrial and production area is necessary to support Gaza’s drained economy, which is why it should remain at bay from political conflicts because it serves the capitals of factory owners.”

He added, “Until now, the destruction that was caused by the 2021 war has not been repaired by external funds. We have already called on the international community to stand by our side, but there is great difficulty in attracting donors because their focus is mostly concentrated on funding destroyed housing facilities, and not the economy and industry sector."

Mohammed Abu Jiyab, editor-in-chief of Al-Eqtesadia newspaper in Gaza, told Al-Monitor, “The PADICO agreement was a result of a personal initiative, and not from donor countries, and aims to boost the local economy and encourage entrepreneurs to invest in Gaza. It also mainly aims to rebuild the basic infrastructure in the factories [that were completely destroyed] to allow them to resume operations.”

He said, “The agreement remains insufficient to restore all destroyed plants, facilities and the local economy, which, after witnessing four wars, has incurred heavy losses of more than $150 million, with no compensation.”

Abu Jiyab noted, “The donor countries usually give priority to the reconstruction of residential facilities and the rehousing of the displaced at the expense of productive and industrial facilities. This has caused unemployment rates to worsen and the ability of local operators to run the plants has declined.”

He concluded, “The private sector used to constitute 60% of the operating capacity in Gaza. Today, however, as a result of the destruction, the private sector [in Gaza] employs only 15% to 20% of laborers. Even at the government level, there is no serious talk about reconstructing the economic sectors that were destroyed, which caused the productive and industrial sectors to be transformed into commercial and consumer sectors."