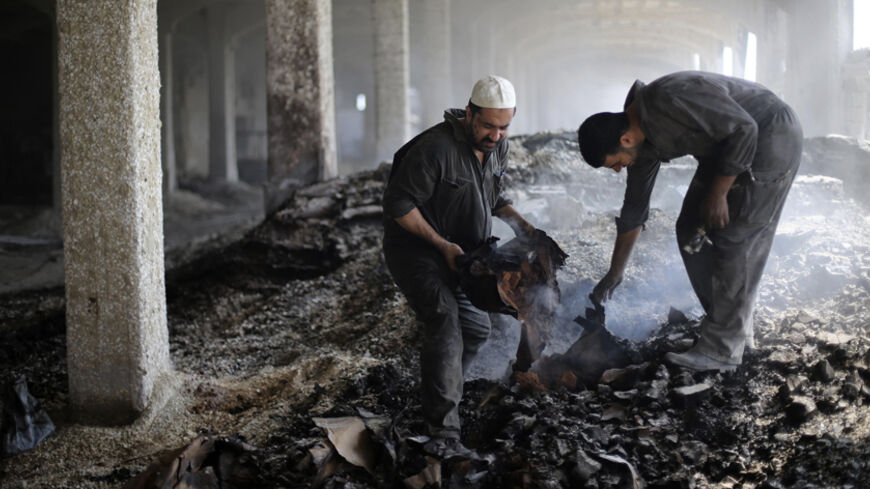 GAZA CITY, Gaza Strip — Gazan businessman Monzer al-Harazin sits inside a small tent he erected in front of the ruins of his home, his two companies and his factory that imported and manufactured clothing and fabrics in the Shajaiya neighborhood east of Gaza City. He is guarding his identity documents and clients’ checks, and some household items he retrieved from under the rubble.

Harazin, who was wounded by shrapnel from Israeli tank shells while fleeing his home during the 50-day war, told Al-Monitor that Israeli F-16 fighter jets bombed his home, his companies and factory, and completely destroyed everything just hours after he and his family had evacuated the neighborhood.

Harazin explained that his losses, as a result of this attack, exceeded $2 million, not to mention the loss of other small properties.

“The warehouses contained clothing and fabrics worth hundreds of thousands of dollars and the factory’s sewing machines were all brand new and purchased only a few months earlier,” he said. "I left a bag at my home with about $130,000 [in cash] and several checks from merchants and clients, not to mention tradable goods such as gold jewelry and personal items, and electrical equipment such as modern telephone devices.”

Harazin lived with 15 members of his extended family, including two wives, in a rented apartment in Gaza City, but he has moved to the home of one of his relatives. He said that he lost about 98% of his business.

Israel targeted most of the business sectors in the Gaza Strip, including the farming and poultry industries. The war destroyed all the properties of Fares Abu Ajwa, the owner of one of the largest livestock and poultry farms in Gaza. An Israeli warplane pounded his farm in Shajaiya, reducing it to rubble and killing all the livestock and poultry.

Abu Ajwa told Al-Monitor that the Israeli attack on his farm caused him a loss of more than $1 million, basically all he owned. “The attack led to the death of 220 dairy calves and cows, more than 8,500 chickens and four camels. This completely destroyed farm was all I owned; it used to be one of the largest farms in the Gaza Strip,” he said.

Abu Ajwa pointed out that his losses not only left him broke, but led to the accumulation of debts to some merchants of more than $100,000. He also said that a large part of his house that accommodated more than 50 family members, including children and grandchildren, was destroyed.

The total losses suffered by Gazans by the time the war ended exceeds $5 billion.

Maher Tabaa, director of public relations at the Chamber of Commerce in the Gaza Strip, said that the recent war directly and deliberately targeted all business sectors including the commercial, industrial, agricultural and service industries, with the aim of deepening the economic crisis already plaguing Gaza and increasing its unemployment and poverty rates.

Tabaa told Al-Monitor that in its war on Gaza, Israel dealt heavy blows to some Gazan businessmen and industrialists. “It is estimated that more than 4,000 business facilities were directly destroyed by the war, including around 500 strategic and major facilities affecting all areas of business, which means that 12.5% of the targeted businessmen were left broke,” he said.

Tabaa said that the value of numerous plants is now zero or below zero since their owners will incur expenses for removing the rubble and remnants of fires and devastation.

“There are several types of companies and factories that were completely destroyed and whose owners went from employers to the unemployed. These plants are varied and include beverage and dairy factories, fabric and clothing factories, sweets factories, poultry and livestock farms and industrial projects. The destroyed factories have become a heavy financial burden on the shoulders of their owners who are obligated to settle the relevant loans with the banks,” he added.

Tabaa said that because of the relatively long period of the last war, numerous businessmen sustained indirect losses as they had to pay the salaries of their staff and workers, and the expenses of operational services and rents. He pointed out that the private sector was destroyed and did not receive any financial support, compensation or relief to help it recover.

Following every Israeli war, the Gaza Strip comes out exhausted, since Israel directly and deliberately targets important business sectors. The recent war was no exception and with Gaza’s economy largely destroyed, many businessmen are facing bankruptcy.