Even university graduates have taken on the arduous work of extracting concrete and iron from the rubble of houses destroyed during last year's war in Gaza's stricken economy. 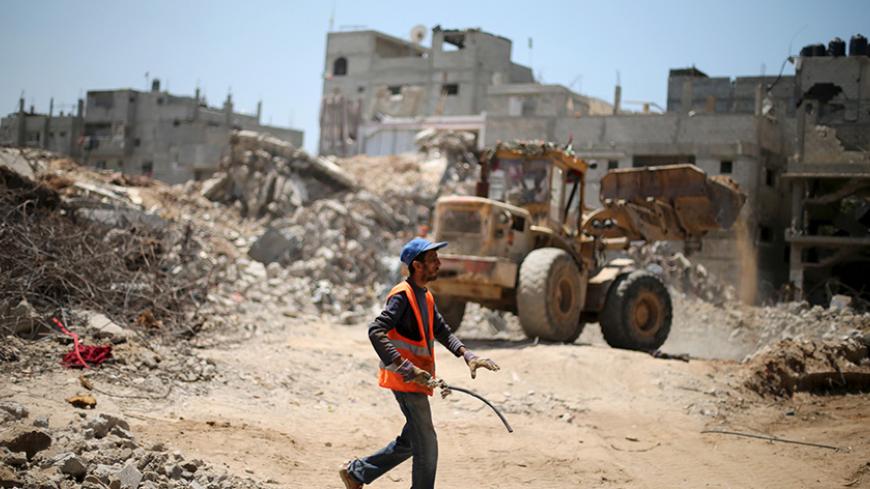 A Palestinian worker salvages metal as others clear the rubble of houses that witnesses said were destroyed by Israeli shelling during a 50-day war last summer, in the east of Gaza City, May 6, 2015. - REUTERS/Mohammed Salem

GAZA CITY, Gaza Strip — Every morning, Atta al-Hindi goes to the sites of destroyed houses in the Shajaiya neighborhood in central Gaza, destroyed in the 2014 Israeli war. Hindi extracts whatever building materials he can from the rubble and sells them to small local recycling factories to support his family of four.

The 3 to 4 million tons of scattered rubble have created work for hundreds of unemployed Gazans who extract iron bars and gravel from the rubble. At the end of 2014, the unemployment rate in Gaza reached 43%, the highest in the world, according to a report issued by the World Bank in March 2015.

Hindi sweated as he tried to straighten an iron rod he had recovered. He told Al-Monitor, “My son and I are extracting iron rods and gravel from the rubble of the houses after making an agreement with the house’s owner to buy what we can extract. One ton of extracted iron [140 10-mm diameter rods] costs $300-$350, while a ton of extracted concrete, stones and gravel are only about $40.”

He said that at the end of a normal day, he transports what he extracts by cart to the factories that process building materials and concrete. There, he sells what he collects, making $30 to $40 a day. “I used to work in a stone factory in Gaza, but during the last war, Israeli shells destroyed the plant and left me unemployed like thousands of other workers. Fate decreed that I find work in the rubble of what was destroyed during the war,” Hindi said.

Last year's war on Gaza damaged about 60,000 homes, 20,000 of which have become uninhabitable, according to a September 2014 statement by the UN Relief and Works Agency for Palestine Refugees.

Although the war ended more than a year ago, most of the rubble remains in place. In a Sept. 14 press conference in Gaza, Minister of Public Works and Housing Mufid al-Hassaina said, “Only 20% of the rubble of destroyed houses has been removed so far.”

Mouin Rajab, an economics professor at Al-Azhar University in Gaza, said that wars, poor living conditions and a weak economy have significantly contributed to driving Gazans toward labor-intensive work for any amount of money to support their families. He told Al-Monitor that there are few jobs in Gaza, “which has caused the unemployed, especially university graduates, to despair from finding decent jobs. So now the unemployed do not hesitate in making tough choices and performing any arduous labor to support their children.”

Workers who extract iron and gravel from the rubble work about 12 hours a day and use simple tools to straighten the deformed rods. Khaled Abu Hatab graduated about two years ago from the Faculty of Commerce at the Islamic University in Gaza. He told Al-Monitor, “Working here is arduous. I used to dream of having an office job, but this work took me out of the ranks of the unemployed and made me able to support myself.”

Despite his meager physique, Abu Hatab breaks concrete columns with a sledgehammer weighing 12 kilograms (26 pounds) to turn these reinforced concrete columns into small pieces to facilitate their transportation and sell them to recycling factories.

Abu Hatab works with four others. Their employer pays each no more than 50 shekels (about $13) a day despite the great risks of sudden column or ceiling collapses. Abu Hatab said that he earns enough for his personal needs but not enough to get married and start a family.

Abu Salah al-Sawariha, who owns a concrete-crushing plant in the Nuseirat refugee camp in central Gaza, buys, recycles and resells extracted building materials. He told Al-Monitor, “The fluctuations in the entry of construction materials to the Gaza Strip and the failure to achieve self-sufficiency has prompted me to buy iron and gravel from young workers who extract them from the rubble.”

According to Rajab, Israel still bans the entry of raw materials to Gaza because of the siege imposed eight years ago. Also banned from entry is metallurgical equipment for the operation of large plants, leading to the closure of carpentry and blacksmithing workshops as well as block, gravel and iron factories, leaving thousands out of work.

The vice president of the Palestinian Federation of Industries in Gaza, Mohammed Hamad, said during an April 15 meeting, “Ninety percent of metallurgical equipment is banned from entry to the Gaza Strip under the pretext that it may go to the resistance.”

Abu Hatab added that despite the great risks, this work is “better than nothing at the moment. ... I wish that I and other university graduates could leave this arduous work after someone solves the economic crises plaguing my country.”