While the widely available and cheap material is needed in Gaza's resource-poor construction sector, rebuilding with the rubble of Gaza's destroyed buildings poses challenges. 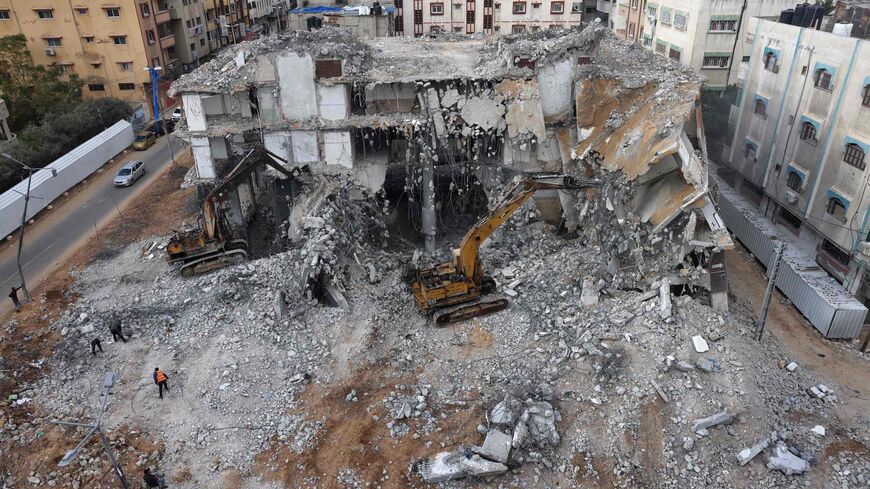 Palestinian workers clear rubble from the al-Jawhara Tower in Gaza City's al-Rimal neighborhood, which was bombarded by Israeli airstrikes last May, on Dec. 22, 2021. - MOHAMMED ABED/AFP via Getty Images

GAZA CITY, Gaza Strip — The Gaza Strip has endured four wars in 13 years, leaving behind a lot of debris and rubble. Local construction companies have found a way to use it and provide opportunities for many workers in an area that lacks building materials amid the Israeli blockade in place since 2007.

While the material can be of wide use, recovering and processing it involves risks, as the material may be damaged. Its availability means some residents us it for much more purposes than is safe.

The Ministry of Public Works and Housing in Gaza reported that the last 11-day war in May 2021 has left 270,000 tons of rubble, while the United Nations Development Program says that it has worked with the local private sector to remove 2.5 million metric tons of rubble left over from previous wars.

Gaza resident Raafat Rizk told Al-Monitor, “I had not intended to complete the construction of my new house now, but the availability of low-cost materials made out of the rubble of destroyed buildings encouraged me to do so.” He explained that the walls of his house are made of blocks manufactured from the rubble of buildings but he used Israeli gravel, which is of better quality but more expensive, to construct the concrete roof.

Rizk added that he procured other supplies, such as iron doors, marble and tiles, from among the remnants of destroyed buildings. He said he was less concerned with the risks involved and that the most important thing is that he finally finished building his house.

Mahmoud Samara, owner of the Samara demolition company, told Al-Monitor that his company makes agreements with the owners of destroyed buildings to purchase and remove the rubble. The Ministry of Public Works and Housing approves the removal the rubble on the condition that the buildings' broken up foundations are delivered to the ministry to be used in widening the roads to Gaza's ports.

“We bear the cost of transporting them to the ports, not the ministry,” Samara said.

He explained that scrap iron is processed out on the spot and the rubble is taken to his factory and crushed for reuse in paving streets or making floors for houses. The company also makes concrete blocks, which are cheaper than those made from Israeli gravel, Samara said, adding, “There is a price difference of $150 per 1,000 blocks between the two.”

He explained that after the May conflict his factory collected about 10,000 tons of rubble, about 6,000 tons of which was recycled and is up for sale. He pointed out that the construction sector picked up after the war but Gaza's economic conditions remain an obstacle in the market.

Samara added, “Before the war … we barely had any work. We only had Israeli gravel, which people are reluctant to buy, except for institutions with the resources and the need to do so.”

He said the rubble is safe to reuse in construction aside from roofs, explaining, “I advise consumers not to use them for building roofs. At the end of the day, they decide for themselves based on their purchasing power. Many houses were damaged during the last storm because recycled concrete blocks were used for the roofs.”

He explained that there is high demand for recycled iron, which is cheaper than concrete blocks. “We have extracted approximately 1,000 tons of iron," he said. "Recycled iron is sold for $580 per ton, while one ton of Israeli iron costs $1,300.”

He said that recycled iron's uses are limited. Highly deteriorated material is sold at $220 per ton, and is used in making cages and fencing for farm animals. Samara explained that the company rejects some scrap iron that is too old.

Samara said that the Ministry of Public Works and Housing does not monitor the process of removing and recycling rubble. He said the ministry only gives approval.

Economic analyst Moin Rajab told Al-Monitor that Gaza had to recycle the rubble because there is no space to store in in the small enclave. He added, “Gaza treats the rubble as free raw material from which it can extract new products used in different fields.”

Rajab explained that recycling and properly disposing of it has been good for the Palestinian economy. He noted, “Were it not for this rubble, for example, the government would have had to buy or manufacture huge cement blocks to widen the port roads.”

Rajab noted that for various reasons, international institutions prohibit the reuse of construction waste in their projects. He stressed the need to observe safety measures while handling and processing rubble, saying that experts examine the material for any risks that may arise in recycling it.

Rajab noted that despite the damage the war inflicted on Gaza, it has contributed to reviving the construction sector and providing hundreds of jobs.