Gaza's construction unions have pleaded with Europe and the United States to pressure Israel to allow in raw materials after Egypt border closure. 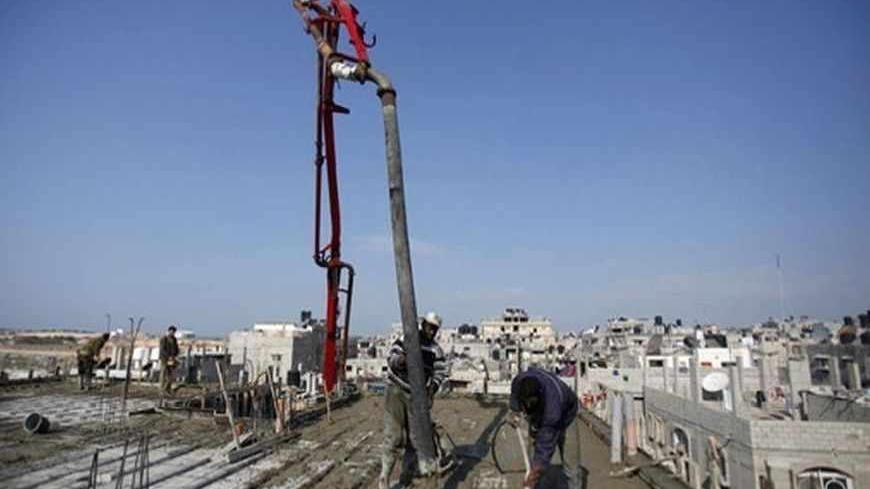 Work stopped and concrete mixing machines grew silent, as workers sat in the shade of the incomplete building that is part of the Mahfoud al-Nahnah school project, west of Gaza City. They had expected during the first week of work stoppage that the transportation of goods through the tunnels dug between the Gaza Strip and Egypt would resume — so that building materials could once again enter the Strip, allowing them to complete construction of the school. But, the second week now neared its end without “cement, aggregate and steel” entering the Strip.

Many of the workers vacated the construction site of this public school, commissioned by the Algerian Movement of Society for Peace and named after its leader. Only a few of them remained in addition to the school’s 45-year-old security guard Ahmad Abu Amra, who told Al-Monitor: “Today marks the end of the second week since construction was halted on the school project. The school was supposed to be completed by next April, but nobody now knows when it will open its doors.”

Pointing to the completed first floor and the fence that surrounds the school, Amra added, “Three buildings were supposed to be built — each composed of three floors housing 36 classrooms in which preparatory and primary level courses for girls will be taught. But, this will not become a reality anytime soon.”

The president of the Federation of Contractors for the provinces of Gaza, Nabil Abu Muaileq, told Al-Monitor on July 17 that the cost of the various building projects that contracting companies halted work on approximately two weeks ago — as a result of the closure of tunnels following the events in Egypt — is estimated at close to $200 million. He explained that among those projects are 39 public schools, residential buildings paid for by private investors in addition to organizations, private homes and infrastructure works.

The school project is not the only one affected by the disruption of the flow of building materials into Gaza two weeks after the tunnels were almost completely shut down. Hundreds of factories producing ready-mix concrete blocks also ceased operating as a result.

Al-Monitor met on July 17 at the Construction Industries Union with Nabil Shahbir, the owner of a factory bearing his name that produces ready-mix concrete. He said that more than a dozen workers were temporarily laid off because of the current crisis. He added that each of them used to get paid $23 per day, but that he was now forced to give them a daily $12 advance, which he will be able to continue giving them for the next three months. After that point — if the crisis continues — he will be forced to terminate their employment.

Shahbir’s factory requires more than 400 tons of cement, sand and aggregate per day to produce ready-mix concrete blocks. He noted that the tunnels were still operating in secret and for very few hours, not exceeding four hours during the day and four hours at night. As a result, limited quantities of materials were entering the Gaza Strip at prices so high that the factory was unable to afford them. Shahbir also explained that factories producing concrete cannot store large amounts of cement for extended periods because the material’s attributes change, thus making it unusable.

In the same context, Farid Zaqqout, the executive director of the Construction Industries Union, said that the union deals with all private sector factories or facilities involved in the business of producing cement, tiles, marble or asphalt. He added that most of the 450 factories had ceased operations, while the remainder have been working at 20% maximum capacity for the past two weeks, as a result of the tunnels being closed down.

During an interview held at his office on July 17, he told Al-Monitor that the crisis was worsening, particularly as a result of fuel not entering the Strip — fuel that is needed to operate machinery and electricity generators when power outages occur. He explained that the situation will lead to great losses reaching hundreds of millions of dollars, incurred mostly by the private sector that is executing internationally commissioned projects, and has investments in residential buildings.

As the crisis continues, he expected demand for cement to grow as a result of the lack of supply, which will greatly increase prices and is reflected in the state of paralysis suffered by the construction industry. This will also affect all other activities — such as ready-mix concrete factories, tile factories in addition to the contracting, paint, wood, aluminum and interior decorating sectors — leading to the unemployment of tens of thousands of workers.

Zaqqout further stated that the closure of ready-mix concrete factories had left more than 3,500 workers without jobs. He called on the Quartet and the EU to intervene and find other avenues leading to a resolution of the crisis, such as putting pressure on Israel to allow the entry of construction materials through the crossings it controls with the Gaza Strip. He pointed out that Israel has prevented the entry of all raw construction materials, except for base course gravel, which is used as a subterranean layer for roadways — of which it allows 800 tons to enter daily.

Abu Muaileq concurred and explained that since 2007 Israel continued to draw up a list of banned raw construction materials including cement and iron. Only some international organizations such as the United Nations Relief and Works Agency are allowed to import these items through the Karam Abu Salem crossing in southern Gaza, to complete building projects. Otherwise, the Gaza Strip solely relies on the tunnels for its needs.

Abu Muaileq added that the tunnels used to ferry approximately 4,000 tons of concrete per day. That quantity has now been reduced to a few hundred tons, at a time when the Strip’s daily needs are estimated to be around 5,000 tons. As a result, contracting companies have seen their business disrupted by close to 80%.

He continued to say that his federation had put forth recommendations during the past 10 days to the US Consulate, the EU and the Quartet, calling on them to end the crisis and put pressure on the Israelis to open the crossings into the Gaza Strip, so that construction materials may be brought in that way instead of through the tunnels. “They all promised to intervene, and now we await the outcome,” Abu Muaileq said.

He added that the most important of the currently stalled construction projects were ones financed by the Qatari Committee for the Reconstruction of Gaza, which was established after the war in coordination with the Gaza government. Most of those projects revolve around infrastructure works, with the first stage of construction already completed for most roadworks.

He stressed that the Federation of Contractors had informed the Qatari committee about the situation and asked it to postpone receiving tenders for the remainder of the projects, as a result of the elevated costs and the lack of construction materials. He noted that the projects that were in fact postponed are the Hamad Hospital, the Hamad Residential Town and the Rashid coastal road.

For their part, the construction workers employed on the Mahfoud al-Nahnah school project all returned home after eagerly waiting for the arrival of any heavy transport vehicle that may be carrying concrete or cement, having hoped that they would return to their families with some money to pay for expenses that incessantly increase during the month of Ramadan.