Strengthening diplomatic ties between Turkey and Hamas means Turkish products have been flooding Gazan markets, leading some to believe the blockade on the Gaza Strip could be lifted. 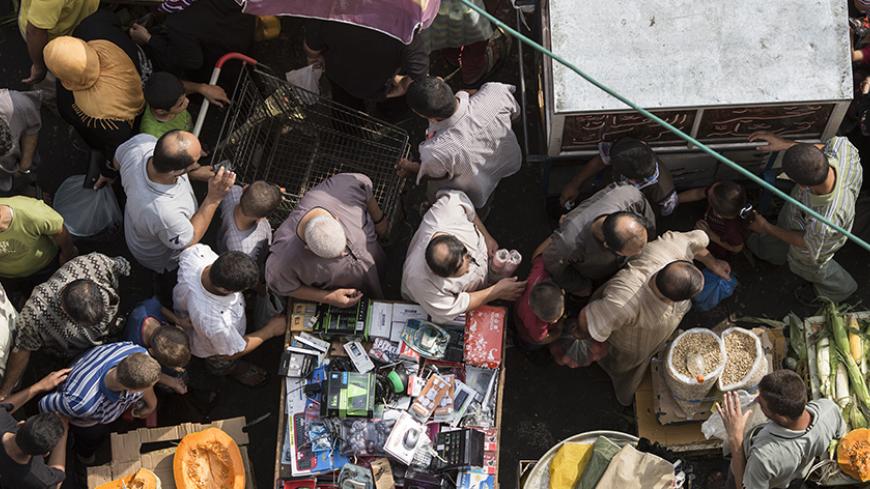 RAFAH, Gaza Strip — The Saturday flea market stretches along the Egyptian-Palestinian border, from the Salah al-Din Gate (known as the Rafah land port) south of Rafah city to al-Awda roundabout in the city center. Because of its location, the market has been known for its Egyptian goods, where merchants and customers from all over the Gaza Strip flock on a weekly basis.

Egyptian goods smuggled through tunnels between Egypt and Gaza invaded Gazan markets between 2007 and 2014. The tunnels were the main source supplying Gazans with various foods, clothes, construction materials such as steel, cement and gravel, and other materials. However, Egyptian goods, as popular as they might have been and despite where they were being sold, have disappeared from the Saturday flea market — and in the rest of Gaza’s markets — and have been replaced with Turkish goods imported through Israel. The Turkish goods have a better quality that goes along with their elevated prices, yet they are within reach for the middle-income bracket in Gaza.

Turkish goods in the Gaza markets are not limited to basic commodities. They include all sorts of clothing, home appliances, home accessories and more.

After Egyptian President Abdel Fattah al-Sisi took office in 2014, the Egyptian army launched a major military crackdown to destroy the tunnels situated along the border between Egypt and the city of Rafah. These tunnels have been used by Palestinian smugglers to supply the market with Egyptian goods, since the Israeli blockade was imposed on the Gaza Strip in 2007. The destruction campaign affected the flow of Egyptian goods and other goods imported through Egypt to the Gaza Strip.

Palestinian media outlets reported in mid-January that a shipment of 3,500 tons of cement was sent from Turkey to Gaza via the Ashdod port in Israel, to help assist reconstruction projects in the Gaza Strip, following the major devastation caused by the 2014 war.

Nabil Abu Muaileq, deputy chairman of the Palestinian Contractors Union, said in a press statement Jan. 11, “These shipments will be subject to careful inspection according to UN monitoring mechanisms, and will be sold in accordance with the same mechanisms. The Turkish cement’s entry to Gaza is not related to political affairs; it is rather the result of commercial cooperation between Palestinians and Turks.”

Speaking to Al-Monitor, Maher Tabbaa, manager of public relations and media at the Gaza Chamber of Commerce and Industry, explained that the markets in the Gaza Strip are full of Turkish goods, as official importers in the Gaza Strip restored relations with export companies in Turkey. He ruled out the possibility that the Turkish imports are the product of any political agreement designed to ease the blockade on the Gaza Strip.

Tabbaa believes that the main reason behind the infusion of Turkish goods into the Gaza Strip markets is consumer desire to be supplied with quality basic commodities, regardless of the source.

Al-Monitor met with a number of customers at the Saturday flea market after Turkish products replaced the smuggled Egyptian goods. Mahmoud Abdul Karim is a regular customer of the market. He is an employee for the Palestinian Authority in Gaza and provides for his family of four.

Abdul Karim told Al-Monitor that he has been buying Egyptian goods for years, but prefers Turkish goods for their quality, despite their higher price compared with Egyptian products.

Although Abu Muaileq and Tabbaa denied the entry of Turkish goods to the Gaza Strip having any political dimension, there have been talks lately about a reconciliation agreement that is being prepared between Israel and Turkey, where the latter demanded easing the blockade on Gaza as a condition for normalizing ties with Israel. Ties between both countries have been strained since 2010 following the Mavi Marmara’s attempt to break the naval blockade of the Gaza Strip. The Israeli navy attacked the ship, which resulted in the killing of 10 Turks and injuries to 50 others.

These talks were further stressed when Turkish Minister of Customs and Trade Bulent Tufekci said in a press statement Dec. 26, “The talks with Israel resulted in allowing Turkish goods to enter the Gaza Strip without obstructions.” It also noted, “All the humanitarian aid will enter the Gaza Strip through Turkish institutions until the blockade is lifted on Gaza.” Tufekci did not specify which institutions will lead the process nor the quality of aid and goods that will enter Gaza in order to ease the blockade.

On the political level, author and political analyst Akram Atallah told Al-Monitor, “This Turkish interest to ease the blockade on Gaza has a political dimension, and it is the result of an ideological rapprochement between Hamas, which controls Gaza, and the ruling Justice and Development Party in Turkey. It is possible for the talks between Turkey and Israel to result in easing the blockade on the Gaza Strip if an elaborate agreement is signed between the two countries. This way, all parties would avoid the outbreak of a new confrontation between Hamas and Israel.”

It seems that the Hamas policies and foreign relations affect Gazans directly. The movement’s stance toward the Egyptian regime resulted in the closure of the Rafah crossing and the demolition of tunnels, since Hamas considered that the events beginning on June 30, 2013, were a coup against Egyptian President Mohammed Morsi, with whom it had close ties.

Meanwhile, Hamas’ good ties with Turkey resulted in easing the blockade to a degree. Yet, this easing has not resulted in drastic solutions to the major problems plaguing the Gaza Strip, such as the electricity crisis and the restriction of Gazans' international movement resulting from the closure of the Rafah crossing.