Food and basic goods have reportedly been brought into Gaza via an unofficial crossing as the humanitarian situation in the besieged enclave worsens. 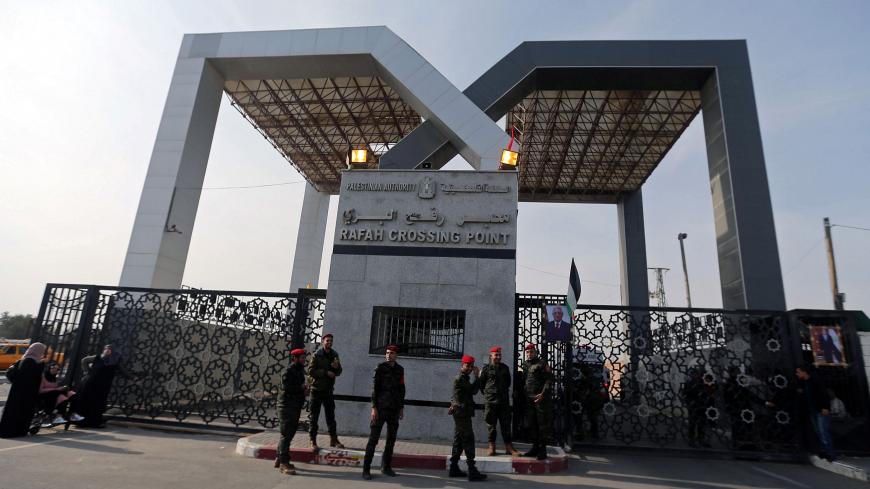 The gate of the Rafah border crossing is seen after it was opened under control of the Western-backed Palestinian Authority for the first time since 2007, in Rafah, southern Gaza Strip, Nov. 18, 2017. - REUTERS/Ibraheem Abu Mustafa

GAZA CITY, Gaza Strip — The Egyptian authorities brought in vegetables, fruits and other goods into the Gaza Strip on Feb. 23 through the Saladin gate crossing, in the southern part of Rafah city, instead of using the standard Rafah border crossing as they normally do.

The Saladin gate, controlled by the Hamas security services, is located on the border between Egypt and Gaza at the site of the original Rafah land crossing that was bombed by Israel in October 2009, 4 kilometers (2.5 miles) south of the new Rafah crossing. By entering through this gate, the goods escape customs and levies imposed on the Rafah crossing by the security services affiliated with the consensus government.

Gaza has seven crossings for the movement of goods and people, six of which are under the control of Israel, which decides when the crossings open and what goods are allowed in. Meanwhile, the Rafah border crossing for the movement of Palestinians and the export of certain products from Gaza is under Palestinian and Egyptian control, without Israeli intervention. The official commercial crossings do not include the Saladin gate.

An official from the Crossing and Borders Authority, affiliated with the Palestinian Authority (PA), told Al-Monitor on condition of anonymity that the authority had refused to allow the trucks to pass at an official commercial crossing under the excuse of not having the right equipment to examine them. The official claimed, however, that the real reason was that these trucks violate the Paris Protocol between the PLO and Israel. Hence, the trucks went through at the unofficial Saladin crossing Feb. 23 instead without proper inspection.

Upon the instructions of Prime Minister Rami Hamdallah in the government of national consensus, Minister of Labor Mamoun Abu Shahla contacted Gen. Tawfiq Abu Naim, the director general of the Internal Security Forces in Gaza, to inquire about the goods entering through the Saladin gate.

A source close to Abu Naim told Al-Monitor that Abu Naim only ordered the closure of the gate and stopped Egyptian goods from entering after he received a phone call followed by a letter from Hamdallah.

According to the protocol, Hamdallah, in his capacity as prime minister and interior minister, is supposed to contact Abu Naim himself.

London-based Al-Hayat reported Feb. 23 that Egypt and Hamas had reached new understandings to alleviate the suffering of Palestinians in Gaza by bringing in goods, vegetables and fuel with Israel’s approval and following coordination with Hamas, even if such understandings were to anger Palestinian President Mahmoud Abbas.

Abbas refused to lift the sanctions imposed on Gaza and did not take measures to ease the situation. Meanwhile, Jibril Rajoub, the secretary of Fatah’s Central Committee, criticized Egypt's role in bringing Hamas closer to dismissed Fatah leader Mohammed Dahlan. For the PA, any Egyptian step in agreement with Hamas is undesirable.

Tahsin al-Sakka, the general director of marketing and crossings in the Gaza Ministry of Agriculture, told Al-Monitor, “We seek to find a way to bring in goods and basic supplies to Gazans amid the disastrous situation — be it through official crossings or informal means. We want to reach certain arrangements and agreements with Egypt in the future, which is not the case at the moment. Any goods entering Gaza can save the situation from completely deteriorating. And perhaps this is why both Egypt and the PA turned a blind eye to the trucks.”

Sakka said the crates that entered only included garlic and fruits needed in Gaza. “We do not import vegetables that farmers in Gaza cultivate themselves. Last year we exported 34,000 tons of vegetables. As a gesture on our part toward farmers, we do not allow any competition on the market, especially since we are unable to compensate for the losses they endured as a result of the successive wars,” he said.

During a March 1 seminar on the Paris Protocol in Gaza City, Abu Shahla stressed that the economic agreement has disrupted the Palestinian economy and that the government is intensively seeking to change it.

In 1994, the PLO and Israel signed the Protocol on Economic Relations, known as the Paris Protocol, to govern economic relations between the two sides in terms of taxes, customs, banks, imports, exports, production, commerce and trade. However, Israel never abided by the protocol’s stipulations.

The agreement mainly provided for a joint economic committee between the Palestinians and Israelis, as well as an import policy and taxes, the types of goods that the Palestinians are entitled to import and export, and the Israeli and Palestinian crossings for the movement of imports and exports.

Economic experts stressed the importance of establishing a trade outlet between the Gaza Strip and Egypt, which would serve both the Gazan and Egyptian economies and would liberate the Gaza Strip from restrictions Israel imposes on its imports and exports.

Maher al-Tabbah, an economist and the director of public relations and media at the Chamber of Commerce in Gaza, told Al-Monitor that the crossing agreement the PA and Israel signed in 2005 prevents the entry of any type of goods through the Rafah crossing, only allowing exportation of products through the crossing. Any change would require an amendment to this agreement.

He added, “We suggested having an official trade exchange with Egypt as another source to secure goods and to replace some goods imported from Israel with Egyptian imports, such as cement and foodstuffs. Our dependence on Israel on imports harms the Palestinian economy. Israel gets to decide what goods Palestinians are allowed to import. We are unfortunately unable to dispense with these imports, especially when it comes to dairy products.”

Israel agrees to import certain goods from Egypt, but the PA did not sign new trade agreements with Egypt for the transfer of goods, and it refuses to import dairy products from Egypt because of their poor quality compared with Israeli products

Explaining the impact of Egyptian goods on the Gaza market, Tabbah said, “The Palestinian economy recovered when smuggling tunnels were active in 2011. Raw materials made their way into the besieged enclave, allowing factories to operate and employees to work. However, the amounts of goods coming in from Egypt today do not really affect the Gazan economy since they enter at irregular intervals and in small quantities. The ideal solution would be to have an official commercial relationship with Egypt to relieve the tragic economic situation in Gaza.”

According to the Palestinian Central Bureau of Statistics, the volume of Palestinian exports for 2017 amounted to $1.038 billion while imports reached $5.303 billion, with a net trade balance deficit of $4.264 billion. The main reason for the gap is the Israeli restrictions on Palestinian exports and the poor industrial and production situation in Palestine.

Political economist Noureldeen Abu Ajwa from Gaza told Al-Monitor, “Israel allows the entry of goods from Egypt in coordination with the Egyptians and in an informal manner in order to prevent the situation in Gaza from completely collapsing. In other words, Israel uses this to escape its responsibility toward the Gaza Strip.”

Abu Ajwa expects various goods to come into Gaza from Egypt in an informal manner in the near future through the Saladin gate. This is indeed possible since the numbers of trucks passing through the Kerem Shalom commercial crossing between Israel and southern Gaza were reduced, as customs rates on imports increased. Meanwhile, Gazans still lack the needed financial means in light of the salary crisis and sanctions imposed by the consensus government on the Gaza Strip.

Whilte the international community is warning that the humanitarian situation in Gaza could implode, all Gazans want is for goods to enter, either through Egypt or Israel, through official crossings or in informal ways.