Egypt and Hamas are exploring trade options, including a new border crossing, that would skirt Israel and the Palestinian Authority. 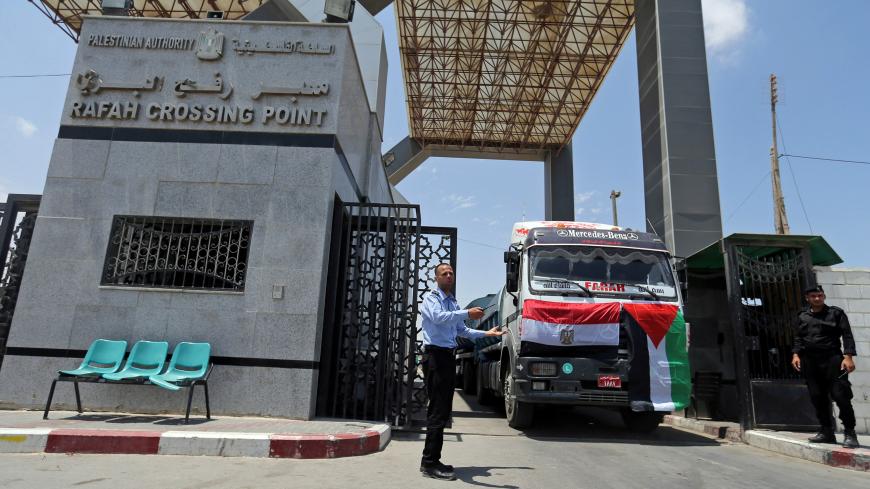 GAZA CITY, Gaza Strip — Egypt tentatively plans to build a commercial crossing that would eliminate the Gaza Strip's need for such trade with Israel and bypass the Palestinian Authority (PA), according to Hamas.

Hamas leader Mahmoud al-Zahar revealed the plan in a TV interview Jan. 11 on Al Jazeera, saying such a crossing would liberate Gaza from the need to "trade with the Israeli occupation or with anyone else."

The report follows a Jan. 10 meeting between Ayman Abed, undersecretary of the Hamas-run Ministry of Economy in Gaza, and a delegation from Multitrade-Cairo, an import-export company.

In an interview with Al-Monitor, Abed said the meeting touched on the basic needs of the Gaza Strip, including construction materials from Egypt. He said that Gaza imported goods worth about $10 million from Egypt during 2018, adding that his ministry is ready to expand the trade volume. “We hope Egypt would assume the task of upgrading crossings, including setting up a new crossing to boost and facilitate trade.”

In June and August, delegations from the Gaza Ministry of Economy had met with officials from several Egyptian companies and businessmen, signing trade agreements whereby Egypt would supply goods to the Gaza Strip, mainly cooking gas, construction materials and medicine.

As part of efforts to break some Palestinian companies’ import monopolies and to encourage the development of more local industry, the ministry decided Jan. 14 not to levy customs fees on raw materials from Egypt and Israel that are used by local industries, specifically the chemical industry. However, Gaza decided in December to levy new fees on imports that have high-quality local alternatives.

Egypt has been supplying consumer goods to the Gaza Strip since February 2018 through the Saladin gate, which is next to the Rafah crossing entrance and controlled by Hamas security.

But trade directly between Egypt and Gaza has raised the ire of the PA in Ramallah, the West Bank. The PA sees the exchange as Egypt cooperating with Hamas behind the PA's back. Since the so-called consensus government in Ramallah doesn't control goods passing through the Saladin gate, the PA doesn't collect taxes on them.

Tahseen al-Sakka, director general of marketing, coordination and crossings at the Gaza Ministry of Agriculture, told Al-Monitor, “Consumer goods imported from Egypt are not available in the [West Bank] market. Palestinian and Egyptian economic committees have prepared, since the beginning of 2018, lists of goods that will be traded between the two sides. But the process so far is limited to importing goods from Egypt to Gaza.”

The Multitrade-Cairo executive director of the Gaza branch, Khaled al-Hosri, told Al-Monitor, “There is continuous cooperation between our company and the [Gaza] Ministry of Economy to meet Gaza’s needs … most notably [in] construction materials.” His company specifically supplies iron and cement for Gaza’s reconstruction process, which has been ongoing since the end of the 2014 war with Israel.

It seems Egypt is seeking stronger commercial relations with the Gaza Strip with its eyes set on winning contracts for UN relief and development projects designed to improve the humanitarian and economic situations there. These projects are funded by a number of Arab and European countries.

Gazans are forced to import goods from Egypt because of the 12-year Israeli blockade. Israel bans numerous goods and raw materials from entering if they have dual civilian and military use. The PA and Israel also impose high taxes on goods entering Gaza through the Kerem Shalom crossing, the only commercial crossing point for the Gaza Strip with Israel.

Before the recent trade agreement, Egyptian goods flooded the Gazan market, triggering an economic recovery in 2011, 2012 and 2013. These goods were smuggled through tunnels between Egypt and the Gaza Strip, until the Egyptian army shut most of them down in 2014.

Maher al-Tabbaa, public relations director at the Chamber of Commerce in Gaza, told Al-Monitor, “The trade exchange volume between Egypt and the PA, both in the West Bank and the Gaza Strip, doesn't exceed $70 million a year. This amount doesn't fairly represent the historical relations between the Palestinians and Egypt.”

According to Tabbaa, the Palestinian private sector is all for replacing Israeli imports with Arab ones. Tabbaa called on Gaza's government agencies to facilitate the movement of traders and businesspeople to and from Egypt through the Rafah pedestrian border crossing to boost bilateral trade exchange. (Currently, Egypt only permits passage at Rafah into the Gaza Strip; traffic from the other direction has been halted. This happened after the PA pulled its staff from the crossing this month, leaving Gazans to manage it.)

Mohammed Abu Jiyab, editor-in-chief of Al-Eqtesadia newspaper in Gaza, told Al-Monitor, “The volume of imports of Egyptian goods doubled in the fourth quarter of 2018, thanks to the talks conducted by the Ministry of Economy in Gaza with Egyptian commercial companies.”

It seems Egypt has decided to continue to supply consumer goods to the Gaza Strip and even increase the size of its supplies in light of the talks about opening a commercial crossing between them. All this comes amid Egypt’s tense relationship with the PA and its recent rapprochement with Hamas.