Since Palestinian protesters set the Kerem Shalom border crossing on fire, there's been speculation that Hamas is trying to replace that Israeli-controlled passage with the Rafah crossing in Egypt. 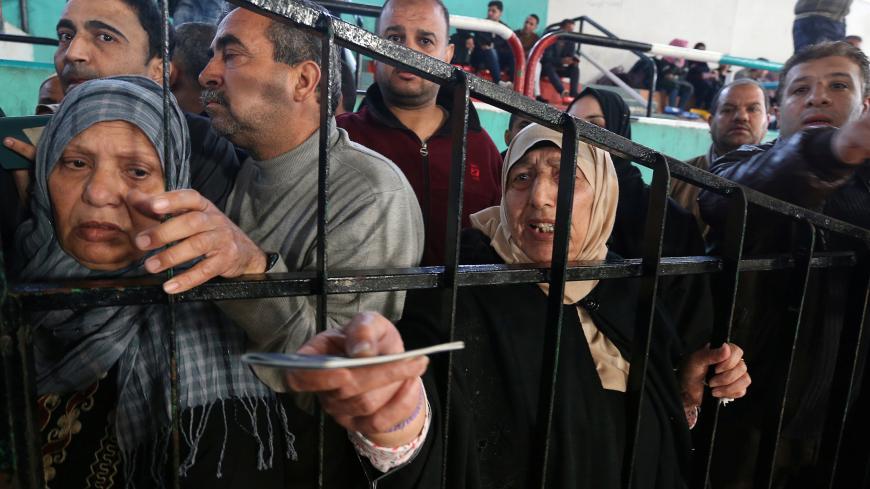 People wait to travel into Egypt after the Rafah border crossing was opened for three days for humanitarian cases, in southern Gaza, April 13, 2018. - REUTERS/Ibraheem Abu Mustafa

GAZA CITY, Gaza Strip — Palestinians have been wondering if Hamas is trying to replace the Israeli-controlled Kerem Shalom commercial crossing with the Egypt-controlled Rafah land crossing, which is currently dedicated to individuals only. Kerem Shalom is considered the only outlet for the Gaza Strip to receive humanitarian goods.

Palestinian protesters on May 11 raided the Kerem Shalom crossing east of Rafah, in the southern Gaza Strip, and set it on fire during the Great Return March, which began March 30. Hamas, which controls the security services in the Gaza Strip, didn't prevent the incident, which raises questions about the movement’s goal. Previously, the same crossing had been burned on May 4 and after some repairs, it reopened May 6.

After Kerem Shalom was burned, Egypt opened on May 12 the Rafah land crossing, about 2 miles from Kerem Shalom, as an alternative. Dozens of trucks carrying construction materials, fuel and foodstuffs entered the Rafah crossing. Egyptian President Abdel Fattah al-Sisi on May 18 ordered that Rafah remain open throughout the Muslim holy month of Ramadan for individuals and for trucks bringing in humanitarian aid.

Hamas handed over control of the crossings to the Palestinian Authority (PA) and its ruling Fatah party in November 2017 as part of a reconciliation agreement signed the month before in Cairo. The Saladin gate wasn't handed over, however, as it's considered an unofficial gate that's not included in the Agreement on Movement and Access reached between Israel and the PA in 2005. Thus, the gate doesn't fall under the control of the PA, but it is supervised by Hamas.

After the fire caused serious damage, Israel closed the Kerem Shalom crossing. General Petroleum Corp. in the Gaza Strip issued a circular May 12 ordering all gas distributing stations to halt sales and distribution until further notice.

Israel reopened the Kerem Shalom crossing May 15 after some repair work. Trucks laden with medical supplies for the Ministry of Health in Gaza entered the crossing, as well as trucks carrying fuel for the UN Relief and Works Agency for Palestine Refugees in the Near East.

A day before the May 11 fire, Hamas political bureau member Fathi Hamad had threatened to destroy Gaza’s crossings. Hamad said in videotaped statements posted May 10 on the local Al-Saa8 website, “If the crossings are not [fully] opened and the needs of Palestinian people in the Gaza Strip are not imported, these crossings might be destroyed regardless of their location.”

The Times of Israel website on May 14 cited a senior officer from the Coordinator of Government Activities in the Territories liaison unit: “The people who came to Kerem Shalom and destroyed the crossing, they didn’t go there by themselves. We know that Hamas sent them.”

US Middle East envoy Jason Greenblatt in a May 13 tweet also accused Hamas of being responsible for burning the crossing and strangling its own people in Gaza.

Jamal Muhaisen, a member of Fatah’s Revolutionary Council, accused Hamas of instigating the Kerem Shalom burning to undermine the PA’s control over it and to prevent the PA from collecting taxes on merchandise reaching Gaza through this crossing.

Muhaisen told Al-Monitor, “Burning the crossing is an unforgivable crime since it is the only official commercial crossing that meets the humanitarian needs of Gaza’s citizens. Clearly, the incident is directly linked to Hamad’s statements, which incited [Palestinians] to burn crossings.”

Hamas official spokesman Hazem Qassem denied Hamas’ involvement. He told Al-Monitor, “These accusations are part of the Israeli propaganda against Hamas and aim at demonizing the peaceful March of Return.”

According to Qassem, protesters burned the crossing as a natural reaction of bitterness to the Israeli blockade on Gaza since 2007.

Muhaisen said Hamas seeks to replace the Kerem Shalom crossing with the Saladin gate at the Rafah crossing so Hamas, rather than the PA, can collect taxes imposed on the merchandise. He argued that this plan aims at cementing Hamas’ control on the Gaza Strip.

Hamas has often asked Egypt to open the Rafah crossing permanently and turn it into a commercial crossing between Egypt and the Gaza Strip.

Qassem said the Rafah crossing opening during Ramadan will help alleviate the crises plaguing Gaza. “The Rafah crossing is the only one that reaches Gaza through the Arab countries. We have repeatedly called for opening it permanently for individuals and merchandise, to free ourselves from the economic subordination to Israel. This would help solve Gaza’s economic problems.”

He accused the PA of abandoning Gaza. “Hamas handed over all crossings to the PA, as per the reconciliation agreement. But the PA is benefiting from taxes through the Kerem Shalom crossing, while it refuses to pay the salaries of Gaza’s employees.”

Palestinian political analyst Talal Okal told Al-Monitor, “Turning Rafah crossing into a commercial crossing might be among Hamas’ options, as the reconciliation has hit a wall.”

Okal added, “Hamas accuses the PA of ignoring Gaza and claims that the PA’s role is limited to collecting taxes through the Kerem Shalom crossing without paying the salaries of its employees in Gaza. Hamas is trying hard to find an alternative crossing with Egypt, with the help of dismissed Fatah leader Mohammed Dahlan, who has excellent ties with Egypt. This would help the movement collect taxes that would allow it to pay the employees’ salaries.”

However, Okal emphasized that the PA should have a hand in any new commercial crossing, to pursue unity between Gaza and the West Bank and to avoid feeding into the rift or encouraging two separate authorities for the Palestinian people.

Muhaisen said the PA will not allow the Kerem Shalom crossing to close, because the Gaza Strip citizens need it. He noted, “The reopening of the Kerem Shalom crossing came as a result of the PA efforts to repair large parts of it, which allowed for the trucks carrying merchandise and medicines to enter Gaza. Meanwhile, work is still ongoing to repair the fuel, gas and construction material lines.”

Still, the PA is concerned about potential attempts to burn and shut down the crossing again, given that Hamas still controls security in Gaza. That makes the scenario of the Rafah crossing replacing Kerem Shalom more likely. The PA would then be deprived of collecting taxes on merchandise entering Gaza, and those taxes would go to Hamas’ treasury.