Palestinian Authority employees claim Hamas forced them to turn over supervision of the Kerem Shalom crossing in Gaza, but Hamas says the workers left because they didn't want to comply with security inspections Hamas imposed. 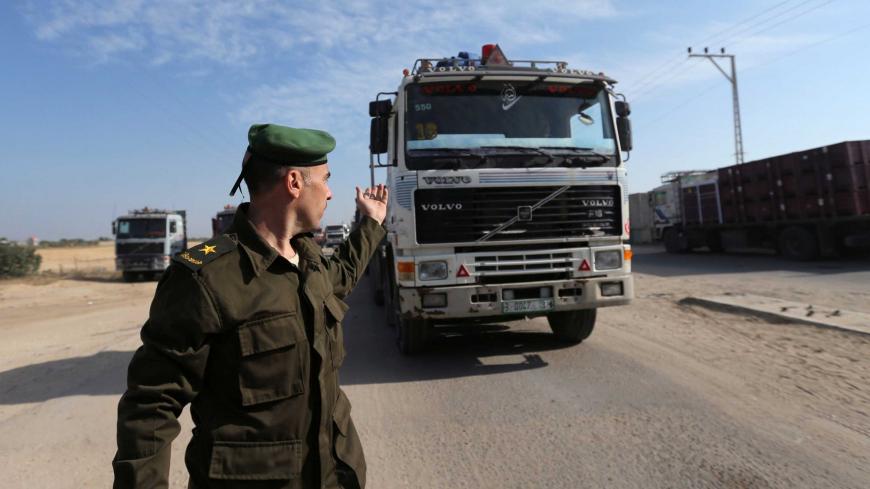 A member of the security forces of the Palestinian Authority gestures as a truck carrying goods arrives at the Kerem Shalom crossing in the southern Gaza Strip, Nov. 7, 2017. - REUTERS/Ibraheem Abu Mustafa

GAZA CITY, Gaza Strip — In a surprising move, employees of the Palestinian Crossing and Borders Authority, affiliated with the Palestinian Authority (PA), left the Kerem Shalom crossing, the Gaza Strip's only official commercial crossing, Feb. 17. Hamas security forces then assumed control of the crossing, which lies at the junction of the Gaza-Israel border right next to Egypt.

Hamas had handed over control of the Gaza Strip crossing Nov. 1, 2017, to the Fatah-led PA in the West Bank under an ultimately unsuccessful reconciliation agreement the groups had signed in October 2017 in Cairo.

The Palestinian official news agency Wafa on Feb. 17 quoted the borders authority as saying Hamas expelled its employees "and prohibited them from accessing the crossing premises.” Hamas, however, disputes that it forced out the workers.

Fatah Central Committee member Jamal Moheisen told Al-Monitor that Hamas began harassing the borders authority staff at the crossing Feb. 10. "A security check was enforced against the staff before they entered the crossing. This harassment culminated when Hamas security forces insisted on taking staff fingerprints for unknown purposes Feb. 17”

He added, “In recent days, Hamas has also forced cargo trucks to park in an open area annexed to the crossing to inspect them, although this is the duty of the [borders authority] staff.”

PA employees also had withdrawn Jan. 6 from the Rafah passenger crossing with Egypt because Hamas allegedly harassed those employees. According to a statement issued by the Palestinian government and published Jan. 8 by the Wafa news agency, Hamas summoned and arrested a number of those borders authority employees.

The Kerem Shalom developments came after Hamas security forces, during a Feb. 16 inspection of goods there, reportedly intercepted a shipment of military boots with soles fitted with secret electronic tracking chips. Turkey’s official Anadolu news agency quoted an unidentified security source in Gaza as saying, “The seized boots are very similar to a design of military boots worn by the resistance members in Gaza.” The source accused Israel of trying to send these boots into Gaza for tracking and spying on resistance members.

The Hamas Interior Ministry in Gaza denied it had expelled the borders authority staff. Ministry spokesman Iyad al-Bazm wrote in a Feb. 17 statement on the ministry's website, “The measures taken by [Hamas] security services at the Kerem Shalom crossing are necessary procedures, especially after recent events in the Gaza Strip. The PA staff at the crossing had refused to cooperate with these procedures for several days. Today we are surprised by the staff leaving the crossing.”

A security source at the ministry told Al-Monitor on condition of anonymity that the inspections on goods entering via the crossing are a result of lessons learned and aim to avoid an Israeli incursion scenario similar to one by Israeli special forces east of Khan Yunis on Nov. 11. The source said Hamas’ investigations into this infiltration concluded that Israel exploited the Kerem Shalom crossing by smuggling in tracking devices and equipment.

Mohammed Abu Jiyab, editor-in-chief of Al-Eqtesadia newspaper in Gaza, told Al-Monitor that trade movement at the crossing was not hindered by the PA employees' withdrawal and the return of Hamas control. “Goods and commodities entering Gaza are purchased through a commercial operation between Gaza’s merchants and Israel, or are being imported from abroad.”

He said, however, that Hamas’ control of the Kerem Shalom crossing will mean a rise in the price of goods in Gaza markets as a result of double taxation and the customs policy on goods passing through the crossing. This policy had been lifted by the consensus government after it took over the Gaza crossings in November 2017.

Abu Jiyab said there is double taxation because the PA collects taxes and customs on these goods before they enter Gaza from the Israeli side, while Hamas collects the same taxes on the same goods after they enter Gaza.

He said Hamas’ control of the crossing will significantly improve the movement's financial revenues. “Hamas will earn about $15 [million] to $20 million a month by collecting taxes at the crossing.”

Talal Okal, a political analyst and writer for the Palestinian Al-Ayyam newspaper, told Al-Monitor that the PA staff's withdrawal from Kerem Shalom falls within the scope of a series of steps already taken by the PA, such as withdrawal from the Rafah crossing.

“This aims to entrench separation between the Gaza Strip and the West Bank in light of the failure of the reconciliation.” he said. “Israel, on the other hand, would not consider stopping the entry of goods into Gaza after the withdrawal of PA employees and the return of Hamas control to the crossing. Israel wants to avoid further deterioration of living conditions in Gaza, which it believes will eventually lead to a military confrontation.”

Moheisen said Hamas' eviction of borders authority employees from the Kerem Shalom crossing will be met with more sanctions; he refused to provide an answer as to what they might be.

In March 2017, the PA began imposing a series of sanctions on the Gaza Strip against the backdrop of Hamas forming an administrative committee to run governmental affairs in the Gaza Strip. Among other things, the PA forced 26,000 government employees into early retirement, cut the salaries of 62,000 employees by 50% and reduced medical transfers abroad, especially for cancer patients. Although Hamas dissolved this committee in September 2017, the PA has continued the sanctions.

Moheisen said, “The PA will not lift its sanctions against Hamas and will not return its employees to the crossings of the Gaza Strip before Hamas hands over full control in the Gaza Strip to the Palestinian government.”

Meanwhile, Abu Jiyab expects new sanctions to include cutting more PA employees’ salaries, especially in the education and health sectors, and reducing budget allocations to the Ministry of Social Affairs in Gaza, which amounts to about 99 million shekels (around $27.3 million) disbursed to about 75,000 poor families in Gaza every three months.