Hamas hikes taxes on imports, including from West Bank

Hamas has imposed new customs duties on goods entering the Gaza Strip but some believe the taxes go too far, especially when they are imposed on items coming from the West Bank. 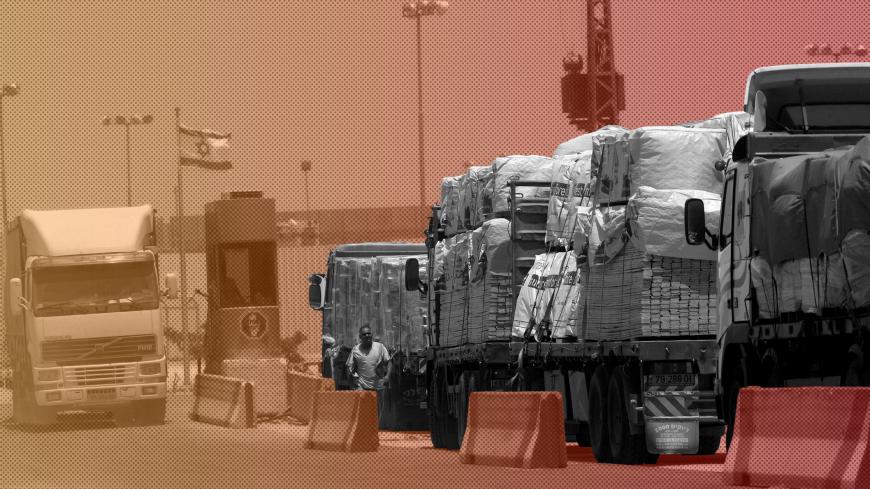 GAZA CITY, Gaza Strip — A recently imposed customs duty has caught some Palestinians off guard as they travel from the West Bank to the Gaza Strip via the Erez border crossing.

The Customs and Excise Directorate of the Ministry of Finance in the Gaza Strip recently placed a sign at the northern Gaza Strip crossing declaring that duties will be imposed on all purchases citizens bring in. The duties went into effect Jan. 20.

The Erez crossing, which is under Israeli supervision, is the only land crossing for people to move between Gaza and the West Bank. Palestinians in the Gaza Strip usually visit the West Bank either for medical treatment or to see their relatives.

Fatima al-Serhi of Gaza City told Al-Monitor she was surprised upon her return Jan. 22 to Gaza through the Erez crossing when customs officers on the Palestinian side, which is run by Hamas, asked her to pay duties on a few items she had in her hand bag. She had bought the items in the West Bank.

Serhi visited the West Bank because her child needed treatment at a hospital there.

She explained that she had 3 kilograms (6.6 pounds) of flavored hookah tobacco, which she had bought in Hebron for 90 Israeli shekels ($26) per kilo. However, customs officials in Gaza asked her to pay 130 shekels ($37) in duties for each kilo. This made her purchase substantially more expensive, though still well below the price she would pay in the Gaza Strip.

“I buy this hookah tobacco for my brothers in Gaza because it is cheaper in the West Bank. A kilo is sold at 270 shekels [$78] in Gaza,” Serhi said.

Mohammed Abu Jayab, editor of economic newspaper Al-Eqtesadia in Gaza, told Al-Monitor, “Imposing customs duties on goods not destined for personal use is common around the world, as such goods would be treated like imported goods and placed under the category of trade.”

Abu Jayab said that people entering Palestinian territories are allowed to carry some goods they can use in a short period of time, such as two cartons of cigarettes or a kilo of hookah tobacco. But anything additional, he added, would be counted as trade and subject to customs duties.

“However, what is abnormal is that such duties are imposed on goods bought in Palestinian cities in the West Bank and brought to Gaza in personal bags. Such goods have already been subject to customs duties upon their entry to the West Bank,” he added.

“Hamas — represented by the Ministry of Finance in Gaza — treats all goods entering Gaza through the Erez crossing as goods imported into Gaza and imposes customs duties thereon, regardless of whether these were bought in the West Bank or outside Palestine,” Abu Jayab noted.

The tax primarily aims to boost the movement’s revenues, but Abu Jayab stated that double taxation is a destructive policy for the commercial sector and the main driver behind high prices in the Gaza Strip. "It is a product of the Palestinian division that created two separate powers, one in the West Bank and another in Gaza.”

Muhammad al-Laham, member of the Fatah Revolutionary Council, believes the tax is intentionally divisive. During a Jan. 21 meeting held at Fatah headquarters in Bethlehem, the West Bank, he condemned the new measure as proof that Hamas is deepening the division between the Gaza Strip and the West Bank.

Hamas has been suffering from an acute and prolonged financial crisis since the Egyptian army in 2014 started establishing a border buffer zone with the Gaza Strip, while destroying and closing border tunnels with Gaza. These tunnels served as the most important route for funds and weapons transferred from abroad to Hamas.

Over the years, Hamas has made several decisions to increase its revenues through taxes, the latest of which was in December 2018, when it imposed new taxes on 95 items and commodities imported from abroad.

There is no available data on the amount of customs the Finance Ministry in Gaza collects through goods entering the Gaza Strip. But Awni al-Basha, the ministry's assistant undersecretary, revealed in statements to Palestine Today news in March that the value of customs and taxes collected by his ministry at all of the Gaza Strip crossings totaled 50 million to 60 million shekels per month ($14 million to $17 million).

Like Abu Jayab, Bayan Bakr, the ministry's director of information and public relations, told Al-Monitor, “The goods that citizens bring into Gaza through the Erez crossing for personal use are not subject to customs duties unless bought in quantities that exceed personal use quantities. In this case, such goods would fall under the category of trade."

Bakr stressed that imposing taxes on commercial goods entering Gaza through the Erez crossing and goods coming from the West Bank “is very important to avoid harming the Palestinian economy."

He added, "Failure to impose such customs would make goods entering Gaza through Erez more competitive compared with those that enter Gaza through the Kerem Shalom commercial crossing.”