The Palestinian government approved a plan to regulate the local tobacco industry to increase tax revenue and end the chaos plaguing the market. 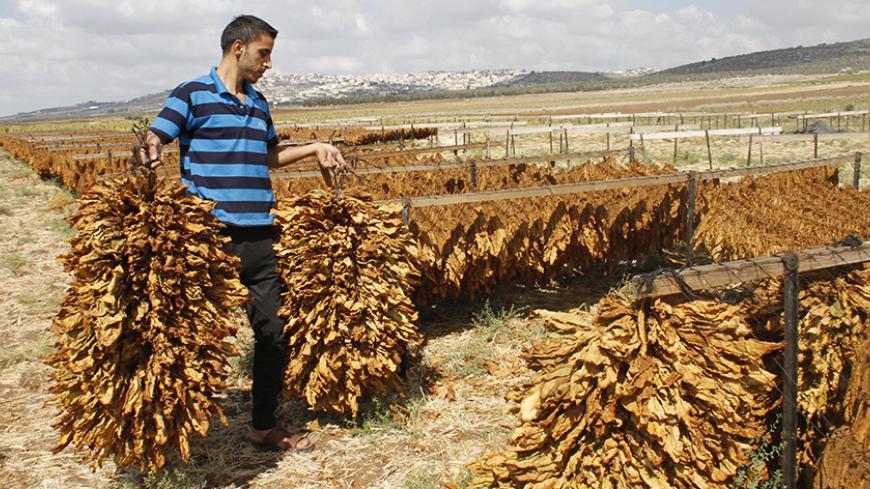 In the northern West Bank, especially in the Jenin governorate, hundreds of Palestinians independently plant, harvest and distribute locally grown tobacco, popularly called “Arab tobacco,” to meet the high demand driven in part by low prices. A pack of Arab tobacco sells for $1.50, while a pack of imports sells for $5.50. According to the Palestinian Central Bureau of Statistics, in April 2016, some 23.5% of Palestinian youths were smokers, with 29.5% of them in the West Bank and 14.9% in the Gaza Strip.

Louay Hanash, director general of the Customs, Excise Duties and VAT division at the Finance Ministry, told Al-Monitor that the government plan aims to organize the cultivation of tobacco in the West Bank under the supervision of the Agriculture Ministry by allowing Palestine Investment and Development, a privately owned company, to buy tobacco from farmers at a fixed price of $8 per kilo and then sell it to companies for cigarette production, packaging and distribution.

Hanash said companies will produce cigarettes subject to the control of the Health and Economy Ministries in line with regulations adopted in 2015 by the Palestine Standards Institution. They should appear on the market by May and sell for $2.15 a pack. According to current standards, a single cigarette should contain 1 milligram of nicotine, 12 milligrams of tar and produce no more than 12 milligrams of carbon monoxide.

Hanash said, “No manufactured or imported materials will be used in the new product.” He added that the plan will abolish the lawlessness characteristic of the Arab tobacco trade, that is, tobacco traded, packaged and sold in the absence of governmental supervision so farmers avoid paying the taxes owed to the government.

Asked whether farmers might refuse to commit to the government plan, Hanash said, “We may face some difficulties with farmers who grow tobacco for individual production and smuggling purposes, and these will be dealt with as smugglers and will be subject to legal proceedings.”

The government plan also covers shisha, the flavored tobacco smoked in hookahs. Hanash confirmed, “The Palestinian market is now open for those who wish to set up a factory to produce hookah tobacco, provided they file an application with the competent authorities of the Palestinian government to ensure that they meet the required specifications and standards.”

He said that three Palestinian factories have already obtained legal licenses to operate, and their hookah tobacco products will appear on the market this month.

The plan is expected to produce significant revenue for the government — nearly $135 million, according to Hanash — through the elimination of tax evasion by farmers and traders while countering the cigarette smuggling trade from Jordan. Jordanian cigarettes are widely smuggled and sold illegally at around $4.30 a pack.

According to a study by the Palestine Economic Policy Research Institute-MAS in September 2016, smoking-related expenses for a single family exceeded expenses related to education, personal care or entertainment activities. Smoking expenses were estimated to average $58, or 5% of a family’s gross income. The study also estimated annual tax revenue from the tobacco sector at $405 million, while the state lost some $100 million as a result of cigarette smuggling through the Karameh crossing and the unregulated local tobacco industry.

According to National Economy Undersecretary Manal Farhan, the Agriculture Ministry will oversee cultivation of tobacco and issues of plant quantity and quality, while the Economy Ministry will supervise cigarette manufacturing, including issuing licenses for factories, quality control and adherence to specifications.

Some tobacco farmers have of course voiced their opposition to the plan. Iyad Abu Shamla, from the town of Yaabod, which is known for tobacco cultivation, told Al-Monitor, “The government's plan will harm tobacco farmers who will not be able to sell all the tobacco harvest. The government wants to eliminate the local demand for our tobacco, which we managed to create over the past years.”

Abu Shamala further explained, “The government can buy all that is being cultivated in the fields and will be specifying the quantities of tobacco to be cultivated. In the past, we would market tobacco directly to the residents of the West Bank.” He also lamented, “We do not mind selling a Palestinian company our product, but no one ensures that this will always be the case.”

Saleh Amarna, who belongs to the Tobacco and Cigarette Association in Yaabod, told Al-Monitor “The government's decision serves a certain segment of businessmen, who will benefit from the decision by setting up factories that produce cigarettes and selling them, using the tobacco we are planting to reap large profits.”

“This plan … will tighten the noose on people who market their own tobacco. Also, the plan will deprive hundreds of families who live off the packaging of cigarettes as the source of their livelihood,” Amarna added.

It appears the new plan will deal a harsh blow to tobacco cultivation in Yaabod. Despite the benefits that the government will enjoy as a result of regulating the tobacco industry, most notably the increase in tax revenues, the effect on hundreds of families who live off packaging and selling their tobacco will pose a major challenge to the success of the government's plan, as will the smuggling business.