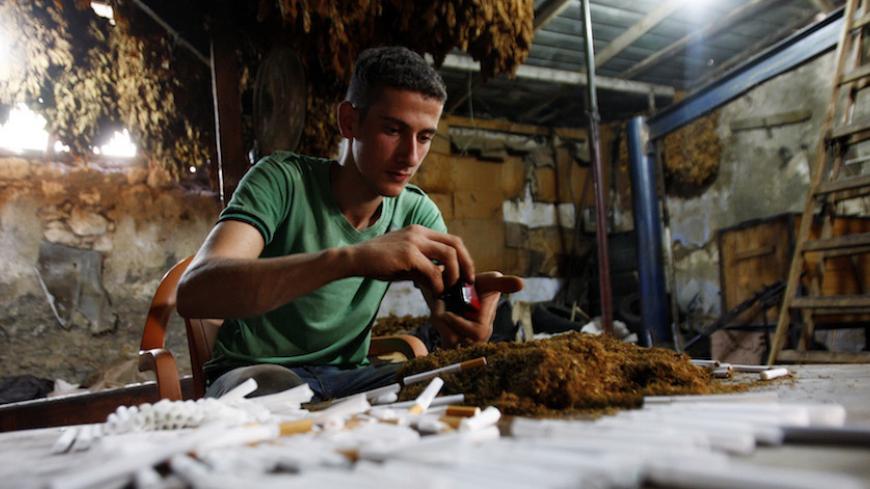 A Palestinian worker makes cigarettes manually with locally grown tobacco in a small factory in the town of Ya'bad near the West Bank city of Jenin, Oct. 8, 2012. - REUTERS/Abed Omar Qusini

JENIN, West Bank — Along with his family, Abu Ahmed, who hails from Jenin governorate in the northern West Bank, has been stuffing cigarettes for three years. He fills on average 3,200 cigarette tubes — locally known as “al-Arabi" — with 4 kilograms (roughly 9 pounds) of tobacco for $20 per day. Abu Ahmed, who runs an olive grove at his farm, relies on this job to provide for his family.

While using a tube-filling machine, Abu Ahmed told Al-Monitor that he gets chopped up tobacco and empty filters from a dealer who sells them for $5 per kilogram (2.2 pounds). He said the lack of job opportunities and the high cost of living have prompted him to do this work to provide for his family’s daily needs.

Mohammed al-Masri, an Arabic teacher in Jenin, smokes al-Arabi cigarettes, which are sold in plastic bags rather than carton boxes. They aren’t rolled like ordinary cigarettes because the tobacco is not processed in a factory. “In light of the harsh economic conditions, I can only afford to buy this kind of cigarette. I can barely afford to pay $1.50 for a pack of al-Arabi cigarettes per day, so I can't pay $5.50 or $6 for an imported pack of cigarettes,” Masri told Al-Monitor.

Thousands of Palestinians in Jenin work in the industry of cultivating, harvesting and stuffing al-Arabi tobacco, and its consumption has increased among the Palestinians because of the high price of imported cigarettes and those locally manufactured.

Several types of imported cigarettes can be found in the Palestinian market, including Marlboro, Kent, L&M, Rothmans, Gauloises and Winston, and their price ranges from $5.50 to $6.50.

The Jerusalem Cigarette Company (JCC) produces locally made cigarettes, such as Imperial, Wisam, Jamal, Allia and Infinity, and prices range from $5 to $5.50.

The third type of cigarette available is al-Arabi. They are locally produced and sold in plastic bags for $1-$1.50, with each bag containing 20 cigarettes.

Kayed Abu Bakr, deputy head of the Agriculture and Food Industries Union in Jenin, told Al-Monitor that the consumption of al-Arabi cigarettes represents nearly 80% of the overall cigarette consumption in the Palestinian market.

Abu Bakr, who hails from the town of Yabad, which is known for its cultivation of tobacco, said, “90% of the families in the town, which has a population of nearly 16,000 people, work in the industry of cultivating, harvesting, chopping and stuffing cigarettes. The tobacco crop is 10,000 acres, with an annual production of more than 12,000 tons.”

While the sale of al-Arabi tobacco is increasing in the Palestinian market, the rate of cigarette smuggling from Jordan and Israel to Palestine is increasing as well, as these cigarettes are sold at a price lower than those legally produced. Speaking to Al-Monitor on condition of anonymity, a source from the Palestinian Finance Ministry said that these cigarettes are not subject to taxes and do not comply with set specifications and national standards. Thus, they are illegal and they deprive the state treasury of millions of dollars. He added that Palestinians in the West Bank and Gaza Strip spend more than $500 million per year on cigarettes.

The smuggled cigarettes are mostly Marlboro and Kent cigarettes that are usually bought duty free at the border with Jordan or are smuggled in from Israel. Some merchants buy large numbers of cigarettes for a lower price than those available in the West Bank. A carton of Kent cigarettes (10 packs), for instance, is sold for $25 duty-free, while inside the West Bank or Gaza Strip it costs $55. The Ministry of Finance and the Palestinian Authority (PA) consider these cigarettes and al-Arabi cigarettes illegal because they evade customs duty.

A study by Alpha International for Research, Polling and Informatics published in January 2014 showed that 39.4% of the cigarettes traded in the Palestinian market are illegally obtained, do not conform with the legal specifications and sanitary standards, do not display a health warning and evade import customs duty.

The study estimated at 45 million the annual number of illegal cigarette packs sold in the West Bank, which cost the treasury between $100 million and $150 million in lost tax revenues.

The increasing popularity of al-Arabi cigarettes affects not only customs revenues but also the local cigarette manufacturing companies.

Mustafa al-Ilmi, the production manager at JCC, told Al-Monitor that the high taxes on cigarettes, both locally produced and imported, are a result of the Israeli-Palestinian customs union under the Paris Protocol.

Ilmi explained that the company’s production costs and profits do not exceed half a dollar per pack of cigarettes. Yet, the high customs duty increases the market price of a pack to $5.50.

In regard to the impact of the spread of al-Arabi cigarettes on the company's production, Ilmi said that JCC's production began to decline in 2013, and today, it has declined by 80%. The company has been forced to dismiss more than 120 employees and workers so far.

Ilmi added that the company paid the PA nearly $105 million in taxes in 2013 and $62 million in 2014. He expects this to fall to $40 million this year, reflecting the company’s decreasing production.

Ilmi pointed out that in 2014, JCC incurred a loss of $1.75 million after its monthly production declined from 3.5 million packs to 800,000 packs per month. This prompted the company to dismiss 120 employees. If the situation persists, 2015 is expected to see additional layoffs.

Ilmi accused the government of causing chaos in the Palestinian tobacco market, because of the high taxes, and of giving up a previous agreement between JCC and the tobacco growers. The agreement stipulated that JCC buys the entire season’s tobacco produced to create a brand of cigarettes at affordable prices, in exchange for tax and customs breaks.

Chaos is still prevailing in the tobacco industry as the government has yet to organize the collaboration between the tobacco farmers and the JCC. Such measures would allow the company to buy the entire tobacco crops to produce brands of cheap cigarettes. But the government is still looking into proposals that it has yet to implement. Meanwhile, al-Arabi tobacco continues to be sold in the market.

For his part, the director general of Policy and Economic Studies and spokesman for the Ministry of Economy, Azmi Abdul Rahman, attributed the challenges in the tobacco market to the increase in tobacco production, which exceeds market needs, and to the lack of agricultural licenses. He told Al-Monitor this has prompted the tobacco growers and traders to market it outside state control.

“The ministry had submitted proposals to the Cabinet, to regulate the tobacco market in the best interest of the growers, the government and cigarette companies. The proposals require that areas of tobacco cultivation be identified and licensed, local companies buy the growers’ entire crop to produce brands at affordable prices and the government implement strict measures to address this situation,” he said.

Yet, the proposals are still being examined by the government.

Abu Bakr said the tobacco growers are ready to cooperate with the government and JCC to buy the entire tobacco crop at $7.50 per kilogram ($3.41 per pound), to produce new cigarette brands at affordable prices.

In the absence of effective government decisions that would regulate the sales of cigarettes through state control and fulfill the citizens’ need for cheap cigarettes — while not depriving thousands of Palestinians from jobs in the tobacco industry — the Palestinian cigarette market remains unstable.